A summit is to be staged on tackling antisocial behaviour in Exeter after it was revealed nearly 6,000 reports have been made to police in two-and-a-half years.

Council chiefs have made the call after voting to extend a Public Space Protection Order (PSPO) outlawing  certain activities by groups and individuals in the city centre.

These include ignoring police requests to stop drinking alcohol or taking illegal drugs, aggressive begging, urinating in a public place, and behaving in an antisocial manner.

The PSPO, introduced in 2017, covers Fore Street, High Street and Sidwell Street and is due to expire in June.

Anyone breaching it can be dispersed from the area and could face a fines of up to £1,000 and a court appearance if they return.

Nearly 6,000 reports of antisocial behaviour have been made to police since the order came into force.

Exeter City Council’s executive committee had been recommended to extend the PSPO for a further three years at its February meeting.

However, members opted instead to lengthen it by a year and to organise a ‘leadership summit’ to look at ways of tackling urban antisocial behaviour.

Simon Lane, service lead for environmental health and community safety, told the meeting that antisocial activities are continuing at such an unreasonable volume.

He said there is no known alternative or more effective control measure and that, on a daily basis, city council officers are using their powers to require the surrender of alcohol.

Extending the PSPO had been supported by the police, with Superintendent Antony Hart, commander for the Exeter, East and Mid Devon, saying: “The PSPO has proven to be a vital tool in preventing and deterring antisocial behaviour… as street drinking, drug-taking, littering and begging have a significantly detrimental effect on those who live in, work in, and visit the city of Exeter. “ 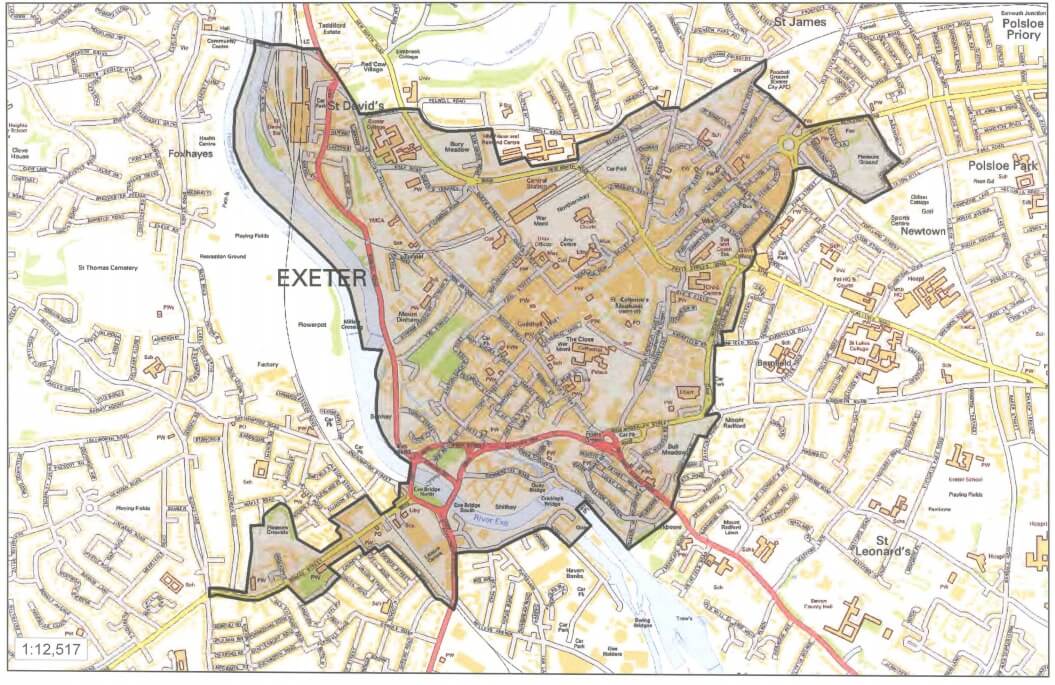 The areas covered by the Exeter PSPO.

Police and Crime Commissioner Alison Hernandez said: “This measure is an important step in helping to tackle antisocial behaviour within the city.

“Issues like street urination, drug-taking, street drinking and begging matter greatly to residents and businesses in Exeter and it is refreshing to see a council willing to take robust steps to deal with the issues that matter to local people.

“The PSPO sends a clear signal that these behaviours are not acceptable and enables both the council and the police to tackle them in a timely and proportionate manner.”

Councillor Emma Morse, portfolio holder for supporting people, agreed that the PSPO should be extended, but only for a further 12 months so that a summit could take place.

She said: “Antisocial behaviour across the city centre is a very difficult thing to manage, so the PSPO is just one tool in the system.

“We have been looking at it as an issue, and while some progress being made by the PSPO, we would like more to be done.

“For some communities, it has been a blunt tool that hasn’t addressed the issues, so there could be the options for smaller PSPOs that cover smaller areas, but we don’t know that, don’t have the evidence, and aren’t the only authority to make a decision on that.

“We will be organising a city centre summit with leadership groups to engage with the relevant bodies to understand what we mean and what can come forward to tackle it.”

Council leader Phil Bialyk added: “I have made it clear that we want to do something different in relation to urban antisocial behaviour and street attachment and homelessness.

“We will deliver a report with a shared understanding of the complex issues that they face, and to implement sustainable solutions, commitments and promises, the resources, and timetables, but it will take time.

“What we need is this arrangement for 12 months to carry on while we decide what changes, if any, we want to make.

“I am proud of what we do, but we all feel that when we walk down the high street and see people in doorways, we should be helping and supporting them, and that is what the council is doing and what the summit aims to do.

“Something has got to be done.”

Cllr Duncan Wood said that the thousands of antisocial behaviour logs highlighted that the PSPO should be a tool and not the only method to address problems.

Cllr Laura Wright welcomed the idea of the summit because the issues have become more complex.

Full council will be asked to rubber-stamp the executive’s decision when it meets on February 26.