Friday, February 28
Trending
You are at:Home»News»Exmouth»Artist’s driftwood angel sculpture to be exhibited in Exmouth to raise cash for RNLI

An artist is to display a life-sized driftwood angel sculpture in Exmouth to raise money for the town’s branch of the RNLI.

Brendan Rawlings has crafted the six-foot-tall crouching winged statue from items he found in Devon and Cornwall. Its hair is made from seaweed from Budleigh Salterton.

His heavenly creation – entitled ‘Your Guardian Angel’ – will be exhibited by the Exmouth RNLI Lifeboat Station in Queen’s Drive from 9am to 4pm on Saturday, February 29.

I worked hell-for-leather, days and nights, last week to make it in time…

Brendan, of Zen Wood Design in Topsham, hopes to net funds for the local cause which saves lives at sea and there will be a bucket collection at the display. 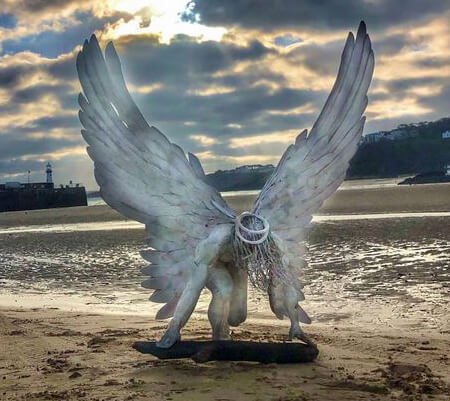 Brendan Rawlings’s ‘Your Guardian Angel’ will be exhibited in Exmouth.

He said: “I am going to put it by the RNLI lifeboat station so that people can donate to them if they wish to.

“I made it literally last week after someone from Torbay Guild of Artists saw an angel wall piece I had made.

“He asked to have that one for an exhibition, but as it was not a full-sized sculpture he asked if I could make one.

“I worked hell-for-leather, days and nights, last week to make it in time.

“The wall piece is much smaller and is not 3D.

“The newest one has hair made of seagrass I found in Budleigh.

“I added hair to give him a windswept/ just landed in the sea look. The hair was made by sticking individual blades of grass on.”

After the Exmouth event, Brendan plans to exhibit the work at a number of other lifeboat stations around the coastline.