Tributes are being paid to traveller John Treagood, who died peacefully on Sunday night, February 9, 2020.

The pensioner, his horse, Misty, and brightly-coloured caravan, was a familiar sight on the roadside and grass verges of East Devon.

A crowdfunding campaign has been set up to raise £3,000 to pay for John’s funeral.

His horse, Misty, will be cared for by Sasha Elson, a regular helper over the last few years. John’s dog, Poppy, also has a home.

Sasha has set up a fundraising campaign to pay for John’s funeral. Any surplus cash will help with the care of his animals, plus a donation will be made to the World Horse Welfare charity, who helped John over the years, and when his first horse, Gildor, died.

Sasha wrote on social media today, Monday, saying John’s final wishes will be ‘carried out to the letter’.

She said: “John had been feeling his age and his health had been declining for a little while, but as always the proud man that he was, did not want anyone to know, which as always was respected.

“From the donations after his funeral has been paid, any remaining money will be split between looking after Misty and Poppy for the rest of their lives and a donation to World Horse Welfare.”

I first met John when I asked if I could write about him and his dog, Gizmo, for a magazine feature in the late 1990s.

He begrudgingly agreed and we set up an interview in Exeter city centre. 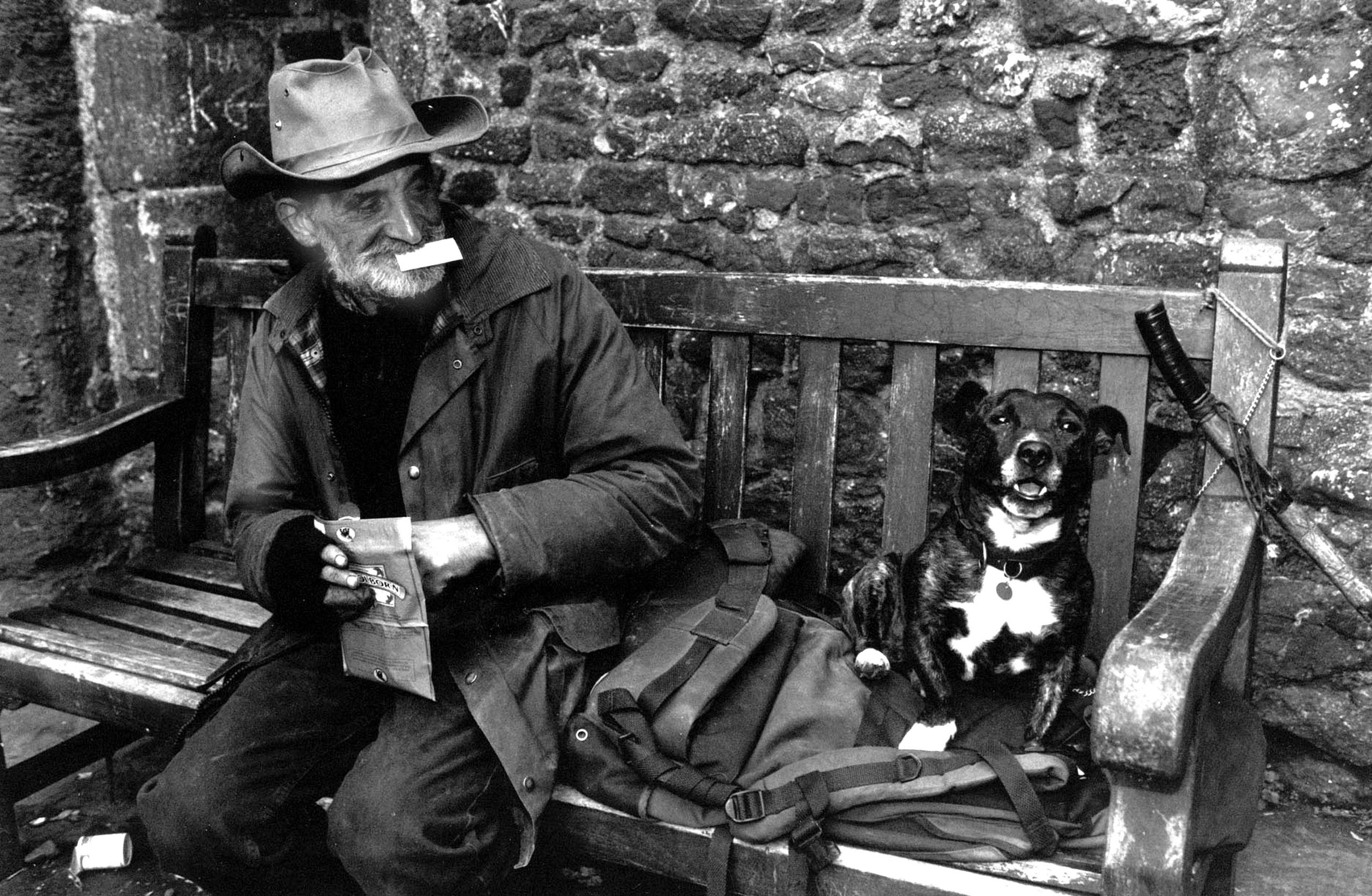 The former environmental lecturer from Kent who walked away from conventional life more than 40 years ago, had a hard exterior; was brusque and suspicious. But one thing that was noticeable from the off was his love of animals – he didn’t have many possessions, but tucked in his wallet was a tattered obituary to his previous dog, printed by a local newspaper when the four-legged friend died.

At that time John sold The Big Issue and walked between several secret locations, including one on Dartmoor where he slept in a bender, only turning to horsepower when he got older and distance became a problem.

As John’s wanderlust continued, his beloved horse Gildor came along and, hitched up to a wagon, the pair took to the road and would travel the length and breadth of Devon.

In the early days of horse and wagon, John would stop briefly en-route on grass verges, hitching up overnight, lighting a fire, then leaving at daybreak the next morning.

As John got older, the stops would become more frequent and he would linger for several days, and eventually weeks as his health deteriorated.

Over the years he had an army of helpers who would stop, fill his water canisters, bring fire wood, food, a newspaper, carrots for the horse, dog food, tobacco and cigarette papers, and a myriad of other supplies for John and his animals.

Sometimes when helping John, he was hard work and belligerent and came across as just plain rude. Other days he was fantastic company and very funny.

He liked to joke he was suing the cigarette companies for their health warnings on his tobacco packets, saying ‘they keep saying I will get cancer but I haven’t yet,’.

Deeply untrusting of humans, if John liked you, and counted you among his friends, you felt lucky.

If you crossed him, or dared to say it was time to hang up the horse harness and retire, you got banished and told in no uncertain terms to stay away.

On Christmas Day John was often inundated with several dinners, dropped off by well-wishers, which in latter years he gave to his dogs, Whisky and Hale. 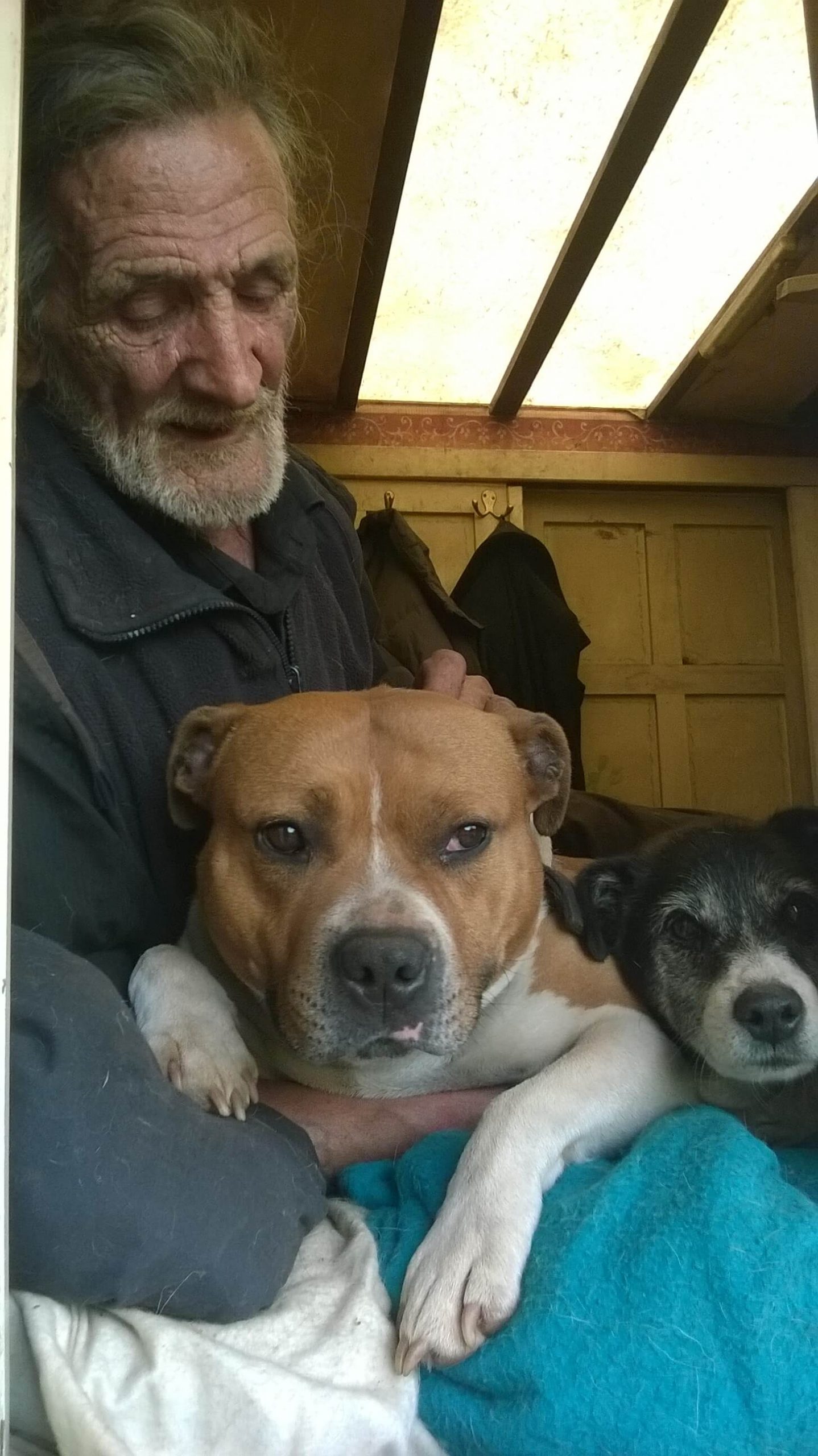 He was an avid reader and loved books, which he either passed on, or bunged on the fire once he finished them.

He secretly loved his fame and his opinion or photos regularly featured in the newspaper or online.

A myriad of stories, good and bad, were written about him. One included him telling people he hated baked beans – it wasn’t true. He liked them, but a glut of donations meant he told a white lie to reduce his ever-increasing supply.

John, his horse and dogs, were a regular and a mostly welcome sight around East Devon and beyond.

He knew not everyone liked him, thinking him a ‘smelly gypsy’. And sometimes that dislike spilled over into endless visits from the authorities, following up reports from the public that John was neglecting his animals, which left him deeply upset.

He had regular stop-off points at Cranbrook, Ottery, Feniton, Poltimore and Killerton corners.

He would travel to Tiverton and Halberton, plus had pit stops at Exminster, Cullompton – near where he once fell and broke his hip – and on some of the busiest roads, including Ide roundabout and the Rydon Lane dual carriageway. John often joked about extending his route to Exmouth and Sidmouth, stopping on the seafronts.

He had a romantic notion when he died, he once confided, of wanting a cherry blossom tree planted at each of his stop spots. And his wagon to be painted black to’ ‘let people know’.

In 2015 John was broken-hearted when he had to have his beloved horse Gildor put to sleep with kidney failure at the age of 28, during a stop-over on the Ide roundabout.

The death of Gildor hit John hard. It was the one and only time he let me hug him. 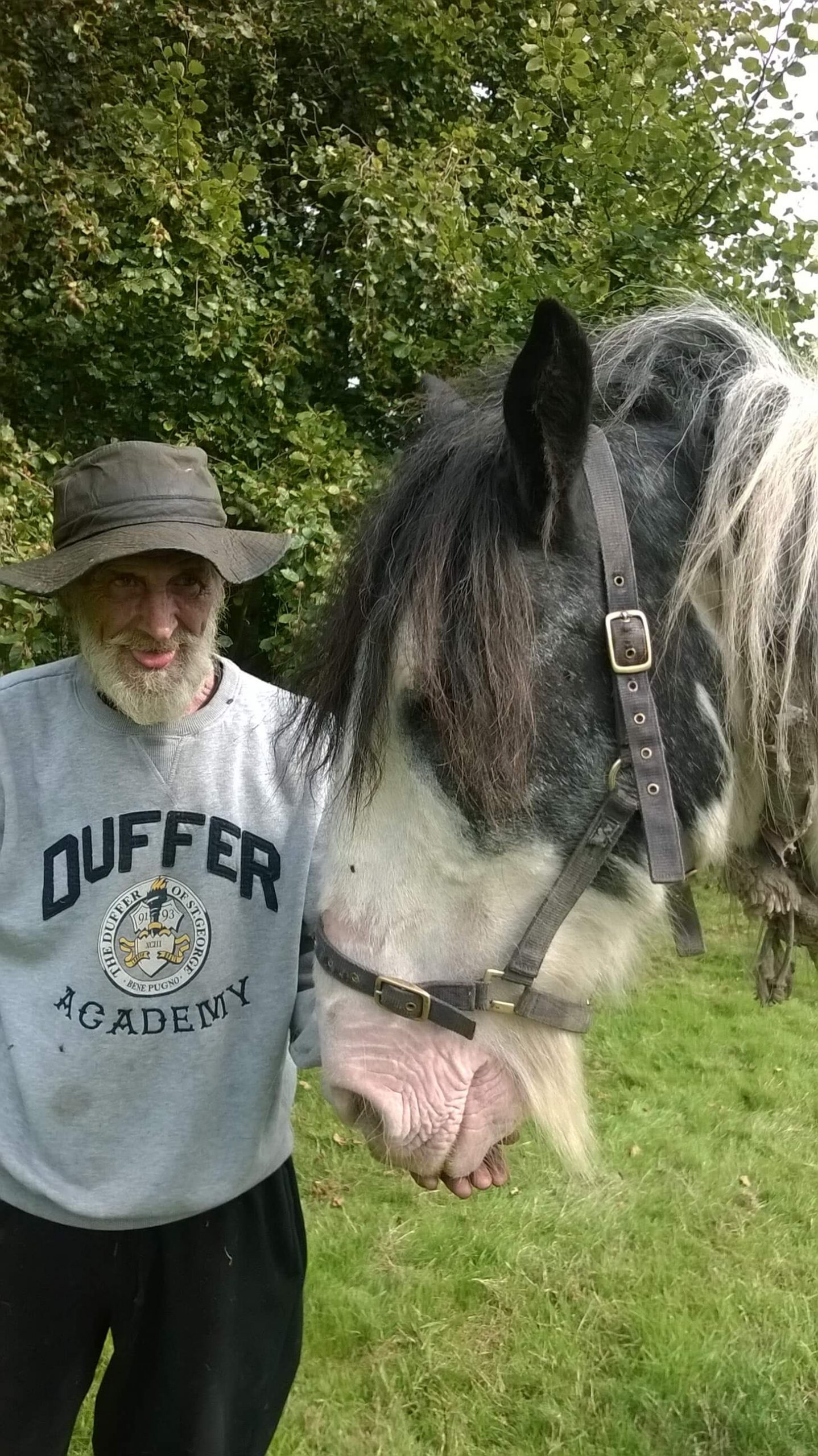 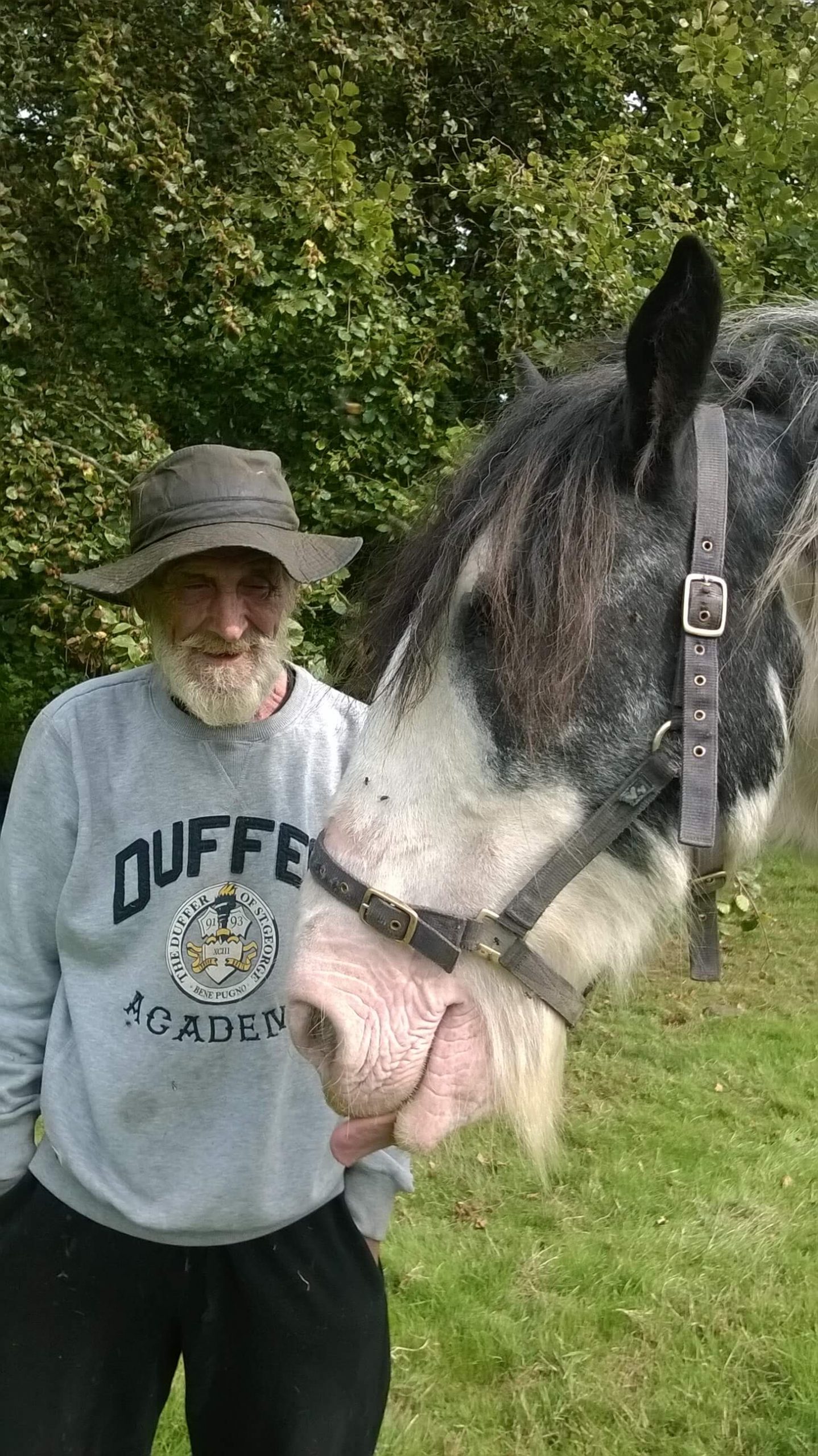 For years Gildor had been the stooge to the double act. ‘You’re a bloody nuisance horse’, John would tell him, lovingly, as he trudged over to pick up yet another kicked over water bucket.

The death of Gildor meant John was stranded for a time on the roundabout, staying there for a fortnight.

As news of the horse’s death spread, a crowdfunding campaign was set up by photographer Richard Horsfield, from Cornwall, with the aim of buying a new travel companion for John.

The fund proved so successful, with thousands of pounds donated from all over the world, there was enough money to buy a new horse, wagon and have some left over for an emergency cash stash for John.

The new horse, Misty, arrived at the start of March 2015 and John’s new home, a baker’s van, with sink, raised bed, battery-powered lighting, was delivered a few days later. 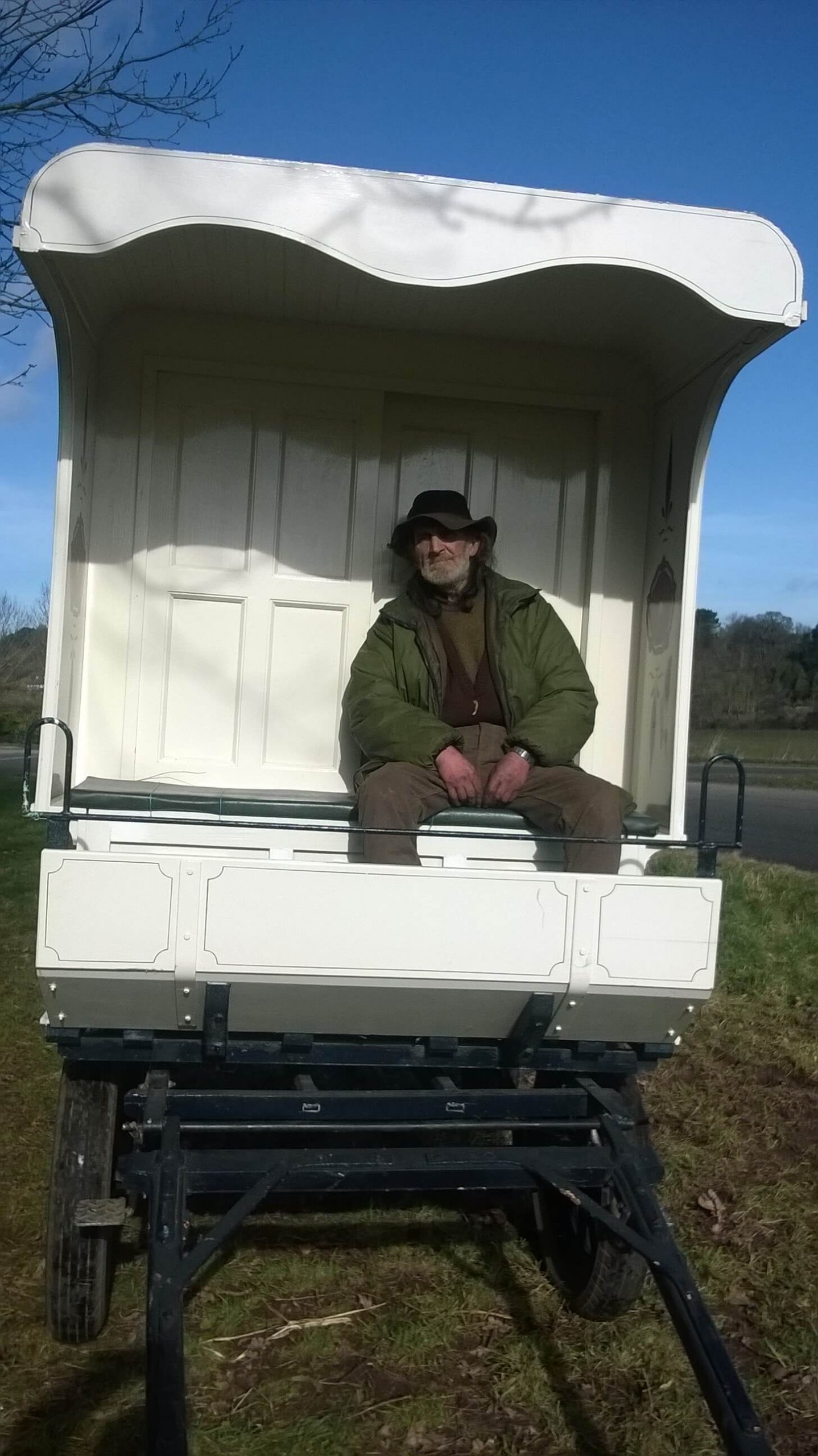 John sits on his new wagon, paid for by scores of well-wishers responding to a crowdfunding campaign.
Photos: Becca Gliddon. 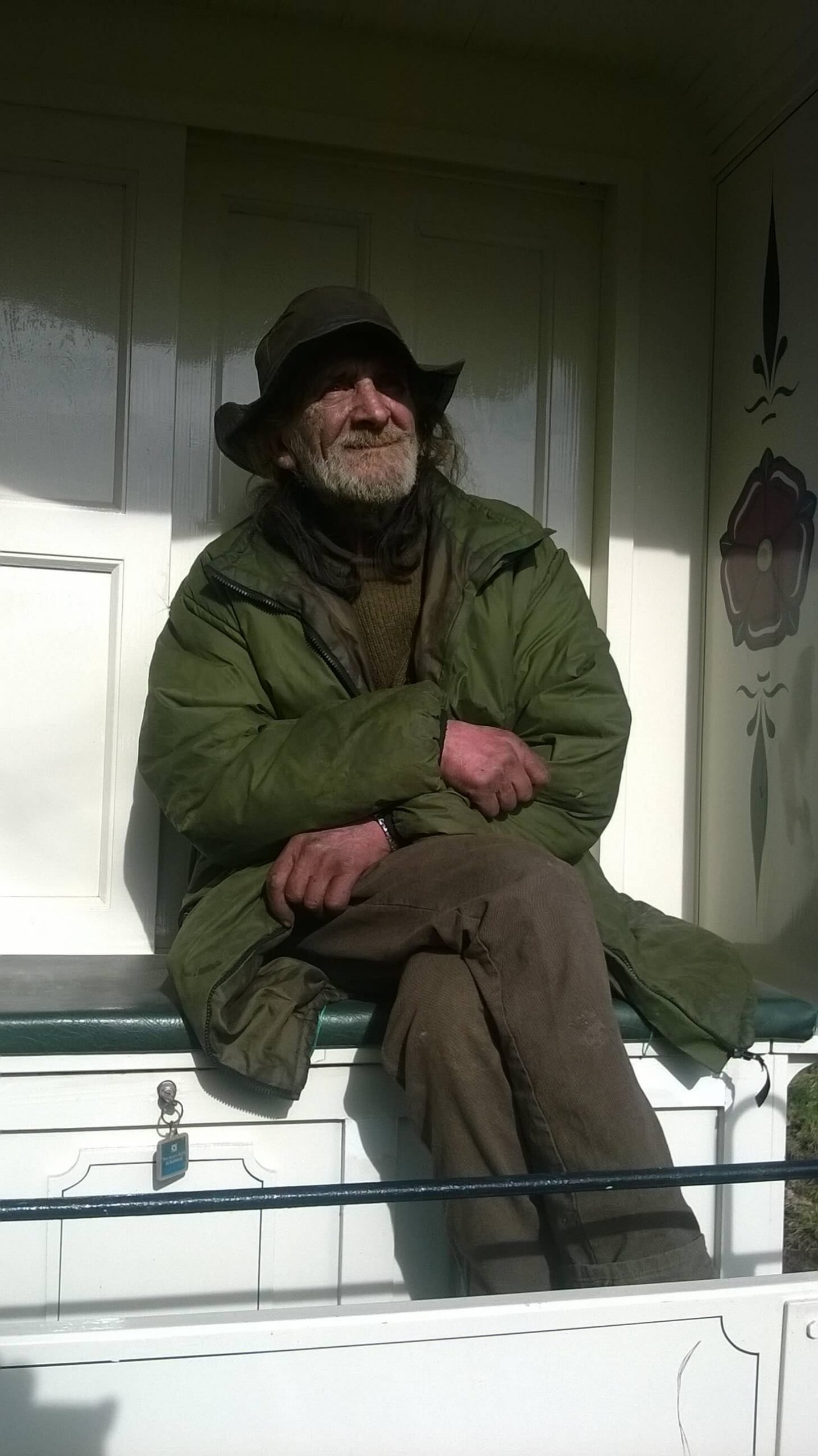 Some of the money was used to buy a new harness for the horse.

At the time John admitted he couldn’t face using Gildor’s harness, saying: “I know I’m being sentimental. I don’t want to use it on another horse. It belongs to Gildor.”

The leftover cash he hid in his new wagon, locked away safely under the floor in a small, secret, spot known only to John.

Even after breaking his hip, he was desperate to return to his outdoor life. Turning his back on a safe place to stay and returning to Misty and the wagon, stopping for several weeks near Ottery.

More recently, his stays on the roadside, remaining at one spot, were noticeably longer and his travels shorter.

His winters were spent squirreled away and John relied more and more upon the help of others to maintain his outdoor lifestyle.