Councillors have narrowly backed moving forward with a vision for a high-quality restaurant, 60-80 bedroom hotel and play area on Exmouth seafront.

East Devon District Council’s (EDDC) cabinet voted by five votes to three to launch a marketing exercise to see if there is any commercial interest in the proposals to further redevelop Queen’s Drive.

Suggested uses for the plot include a two-storey café/restaurant on the existing Harbour View café site, a three- or four-star hotel of ‘high design quality’ and a mix of play and open public space.

The mooted restaurant/café and hotel offer will be marketed first.

Once there is certainty of what can be delivered in terms of a hotel, the remainder of the site will be marketed for play and leisure uses.

Bids will be received and reviewed by May and a report will then go to cabinet with a recommendation on a preferred developer or operator in July.

Current temporary attractions – including the Queen’s Drive Space – will continue for this summer. 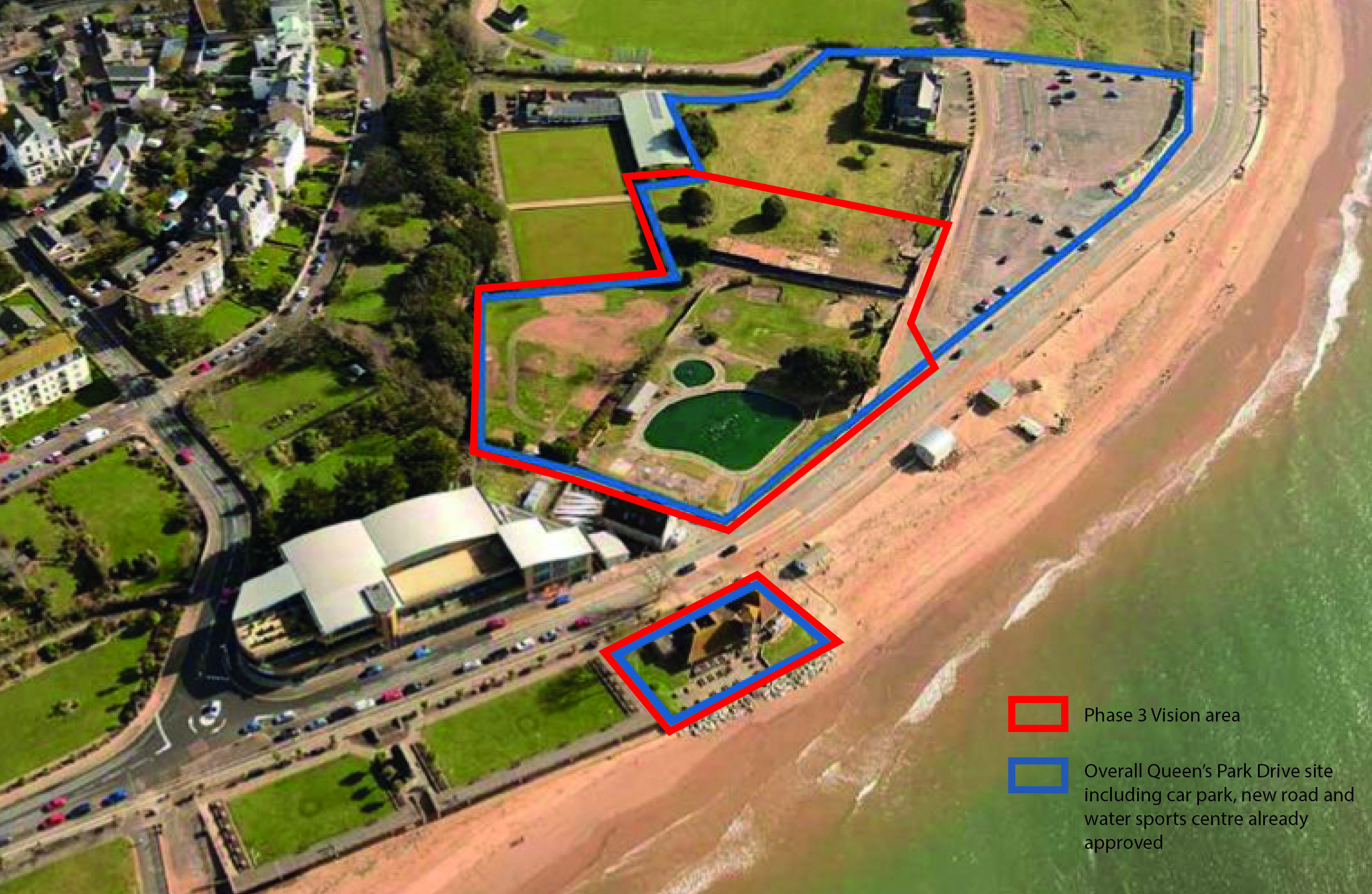 ‘Sun and sandals’ café and eatery with panoramic views

Alison Hayward, project manager for place and prosperity, said the Harbour View Café site offers scope to be redeveloped to provide a relaxed but good-quality ‘sun and sandals’ offering on the ground-floor with decking and seating that has direct access from the beach.

A large restaurant with terraces – providing a more formal dining offer combined with stunning panoramic views – is planned for the first floor.

The Coastwatch service could then be situated on the second floor within a tower area designed specifically to meet its operational needs.

Ms Hayward said that a hotel on the site could help fund desired public amenities.

Lambert Smith Hampton has been soft market testing the proposal for holiday accommodation and it was its view that the site will appeal to a broad range of hotel operators.

She added that there was no intention for a hotel to go on all of the Queen’s Drive site and the rest of the plot can be used for leisure and play uses.

‘We should be thinking about community’

Councillor Nick Hookway said he had some major concerns about the report presented  cabinet.

He added that the council is held in low regard by Exmouth residents and there is a deep mistrust over the proposals – made worse as the authority’s Queen’s Drive Delivery Group meets in private.

“There is no public support for the plan and the consequences of it failing are too great to contemplate,” said Cllr Hookway.

But Cllr Bruce de Saram backed the proposals and said: “We need to get the real-time marketing information so a version of phase three can be delivered.

“People will have fun and we want them to come to Exmouth and have fun, so I am 100 per cent behind this report and getting the project completed within the timescale.”

Cllr Kevin Blakey, portfolio holder for economy, said no decisions about exactly what will go on the site were being made at Wednesday’s meeting.

He added: “We are looking at what the options and possibilities are.

“Less than half of the site would be used for hotel use and we can look at the other possibilities when we have that information. But until we know if we have any hotel operators who want to invest in the site, we don’t know where to go.”

He added that a study had advised that a key commercial anchor was needed and that was probably going to be a hotel on around a third of the whole site – with the remainder being used for leisure.

Cllr Pook said: “We need clarity. We talk about there being interest, but we haven’t had the hard interest in the site, so until we have that back, we don’t actually know.

“After the first round, we will know and then can take a couple of those offers to develop further.

“If we don’t get the offers that we want, it could be that the whole site could come back to marketing.

“The solution has to be sustainable and viable and, unless there is something as an anchor tenant, we could end up with something that isn’t fully utilised.”

Henry Gordon Lennox, EDDC solicitor and monitoring officer, confirmed that any offers would come back before cabinet before a decision to proceed is taken.

He added: “If you are not happy with any bid, you have the right to say no if you don’t like the proposals.”

Cllr Geoff Jung said that the cabinet appeared to be damned whatever it chose to do.

He added that the decision to realign Queen’s Drive itself and create a new car park has cost the authority around £3million and it has to find a way of paying for it.

Cllr Jung said the council has a choice between doing what residents desire or putting a hotel on the site and recouping the money.

Cllr Megan Armstrong added: “The council has been left with the problem for Queen’s Drive as a result of poor decision making by the previous administration.

“They never had a business plan. There was the unnecessary rerouting of the road. The closure of the successful businesses that were bringing substantial income to the council. Thousands of residents have not been listened to.

“There has never been any evidence to show that we need a hotel. It was something dreamt up by the last administration.

“Nobody in the survey I did in 2015 mentioned that they wanted a hotel.  We are here for the public.

“It is easy to say we need to make money out of this, but…we are forgetting what the public want.

“Holiday accommodation could go anywhere and who is going to pay for a nice hotel when there are children playing at the front?

“We have got no evidence for any of this and no idea about what sort of money we are talking about.

“We should be thinking about what the community want first. They have suffered enough.”

It had also been recommended that the council’s Queen’s Drive Delivery Group should continue to meet in private – however,  this angered councillors.

Cllr Paul Millar said: “The general public expect more openness and transparency in how phase three is done, but the recommendations are proof that residents not being listened to.

“The Queen’s Drive meetings should not still be behind closed doors. It is wrong to compound the level of past secrecy.”

Cllr Joe Whibley added: “I understand the desire to move the project forward and a desire to get the seafront done, but that is not a reason to throw openness and transparency to the wind.

“There has been no discussion about how to translate the vision into actual plans.”

Cabinet members ruled that, from March 1, the Queen’s Drive Delivery Group should sit in public, although the press and public should be excluded from discussion of some items.

They also ruled that an Exmouth councillor should be part of the panel which agrees the selection criteria for the commercial development.

“It is not practical to have all the ward members for Exmouth as it would grind to halt, but if we have a representative from Exmouth to add to the group, it goes some way towards better engagement with the Exmouth community.”