A Seaton woman left feeling housebound and on anti-depressants after the death of her parents has spoken of how volunteering in a local charity shop handed her a lifeline.

Liz Crosfield says the role with Hospiscare has helped her get her confidence back after a traumatic time in her life.

“Volunteering has completely changed my life and outlook,” said the 56-year-old.

“I’m in a much better place because of it. I’m completely unrecognisable from where I was just a year ago.”

Originally from London, Liz moved to East Devon in January last year to be closer to family after losing her parents.

Both her mum and dad died within a short space of time; her father had been unwell and her mother had struggled with melanomas, but it still came as a shock.

I’m in a much better place because of it. I’m completely unrecognisable from where I was just a year ago…

Liz says the difficult time saw her completely withdraw into herself.

She did not want to leave the house or see anyone and was prescribed anti-depressants.

After moving to Seaton, Liz felt she was ready to get out and do something.

She wanted to contribute to the community and give something back, but she also wanted to do something positive for herself.

“I went for a walk through Seaton and saw the Hospiscare shop,” said Liz.

“My parents didn’t get into their local hospice, but we really wish they had. It’s a cause very close to my heart.

“I went into the shop and spoke to Barbara, the sales advisor.

“I asked if they needed any volunteers and Barbara responded with a very enthusiastic, ‘Yes Please!’.

“A few days later I got a call from Louisa, the manager, who invited me in for a trial. 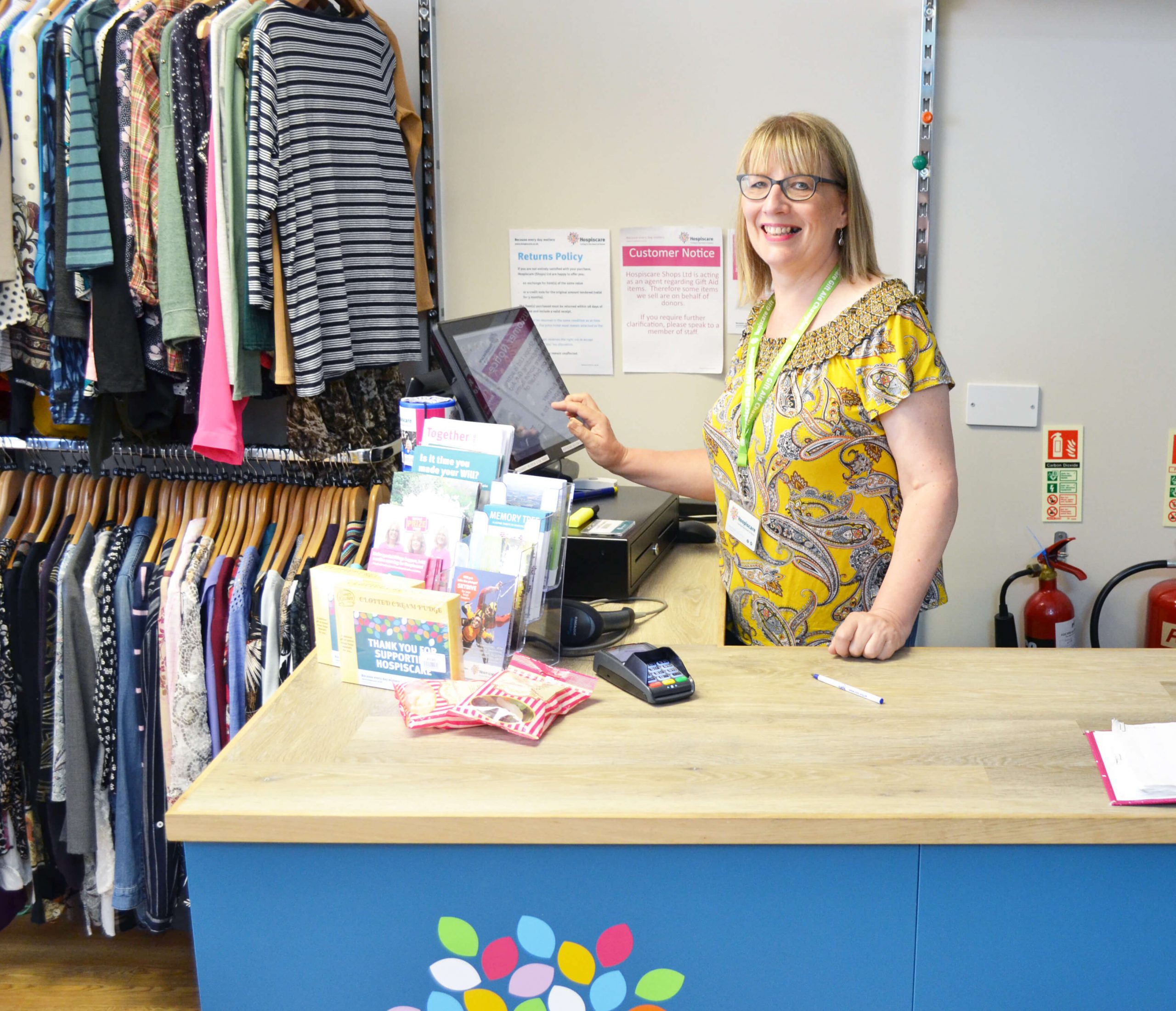 Liz Crosfield volunteering in her local Hospiscare shop in Seaton.

“I absolutely loved it from the start. All the other volunteers are amazing.

“Everyone is so supportive and it has given me a lot more confidence.

“Volunteering at the shop has led to me doing other things for Hospiscare as well.

“I walked five miles at the Twilight Walk with one of the other volunteers from the shop and raised over £220 for Hospiscare.

“I have donated some of Mum’s craft supplies to other volunteers who make items to raise money for charity.

“It’s so nice to know that these are being used to create something else and raise money for charity.

“Volunteering has given me a huge amount of confidence.

“Even though I haven’t been living in Seaton very long, I really feel like part of the community.

“People will say hello to me on the street because they recognise me from the shop.

You never know the change it could make in your life, so just come and give it a try…

“I also find it really rewarding being able to help customers who have recently experienced a bereavement.

“I am able to listen to them and empathise with what they are going through.”

Liz does everything she can to help in the shop; from sorting donations and steaming clothes to talking to customers and creating window displays.

“It’s nice to feel like I’m trusted to help with the window displays and work on the till,” she added.

“To anyone that wants to try volunteering I’d say just give it a go.

“When I started, I had no idea what to expect.

“I was made to feel so welcome. I’ve got so much more out of volunteering than I thought I would.

“You never know the change it could make in your life, so just come and give it a try!”

Hospiscare cares for terminally ill adults and their families in Exeter, Mid and East Devon.

To find out more about the range of volunteering roles available in Seaton and East Devon, email volunteering@hospiscare.co.ukor call Vicky or Bob on 01392 688005.