Evacuated residents have been allowed to return home after a major blaze in Exeter today closed roads and a rail line.

Cowley Bridge Road will remain closed overnight until tomorrow, Sunday, as the fire service remains on scene overnight, damping down, after bringing the blaze under control.

Saturday morning’s fire, which raged through a work wear company earlier today, Saturday, has prompted a police warning to keep windows and doors closed in the area because of lingering smoke.

Police said the cause of the fire was not being treated as suspicious.

Residents evacuated from properties near the blaze site, at a work wear firm, have been allowed back home.

A Devon and Cornwall Police spokesperson said: “The fire service have worked continuously this afternoon to get the fire under control.

“They will remain at the scene this evening to monitor and continue to dampen it.

“During the afternoon, police evacuated a small number of people from their properties but they have since been allowed back.

“Cowley Bridge Road is expected to remain closed until tomorrow morning. The majority of other road closures have now been lifted.

“The cause of the fire is not being treated as suspicious.”

Neil Ralph, local policing and partnership Superintendent, thanked for community for its ‘patience and cooperation’ while the fire service worked to bring the blaze under control.

He said: “I’d also like to thank the emergency services and many other partner agencies who have worked incredibly hard at the scene throughout the day.

“You may continue to see emergency services at the scene into tomorrow morning but I hope that this will not cause much disruption.” 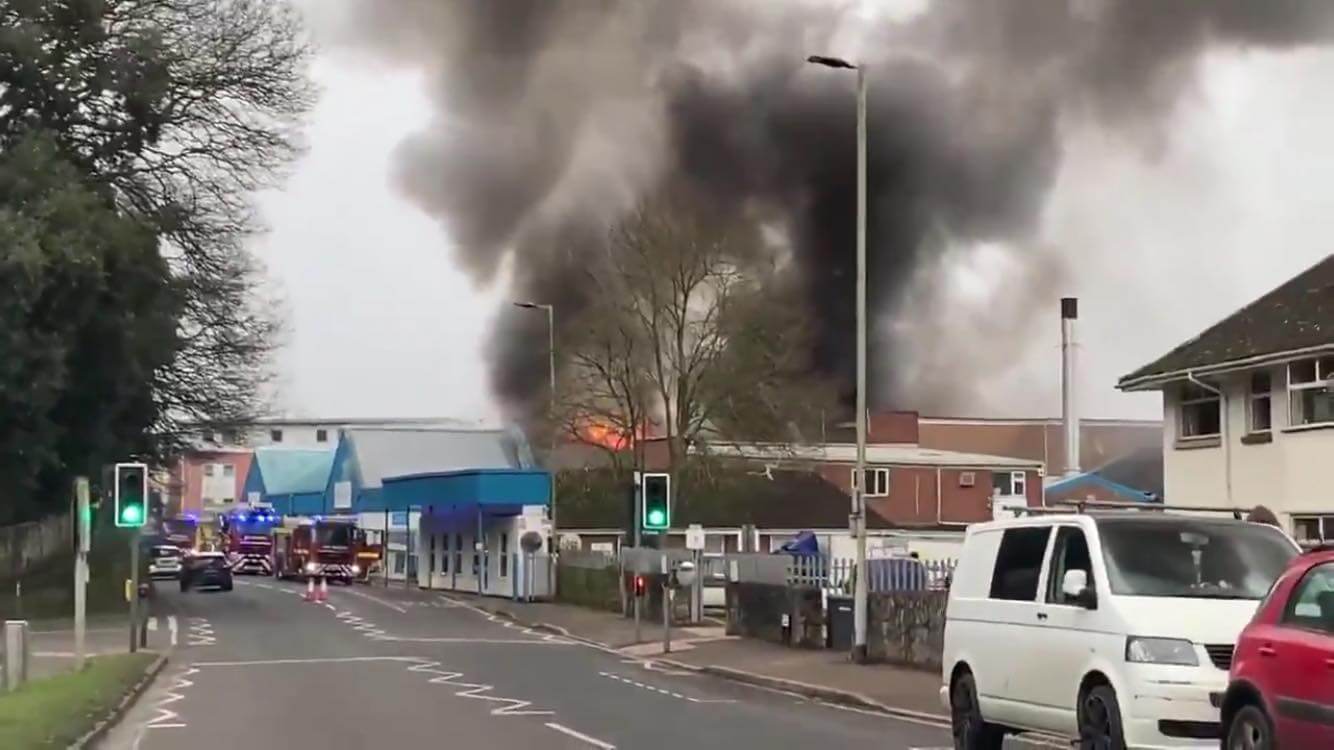 Many homes near the Cowley Bridge Road blaze were evacuated.
Photo: with permission. 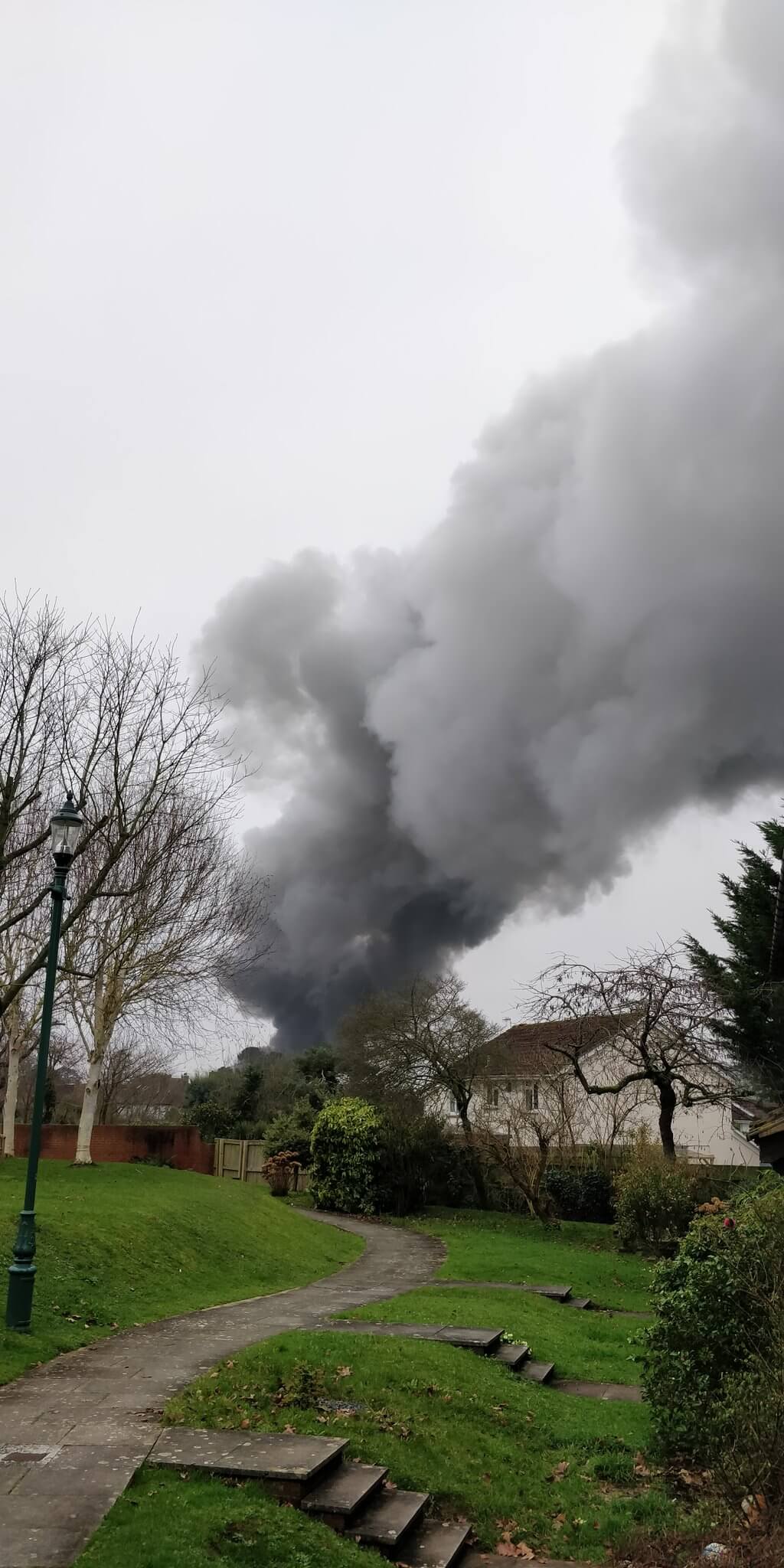 The blaze broke out in a commercial work wear business in Cowley Bridge Road shortly after 10.30am this morning, Saturday, January, 25.

The fire service is expected to scale down the level of cover throughout the evening, but remain on site overnight.

A total of 15 fire engines and specialist equipment from across Devon and Somerset was drafted in to tackle the blaze.

Earlier today police said there were no reported injuries and declared the fire a major incident.

Police are urging the public to continue following the directions of the emergency services, keeping away from cordoned-off areas and avoiding the smoke.

Inspector Lee Groves, at Devon and Cornwall Police, said: “I urge the public to respect the cordons, not to put themselves in harm’s way, and for nearby residents to keep all doors and windows shut due to the level of smoke.”

Nearby residents described hearing ‘mini pops and explosions’ coming from the direction of the blaze.

Police said cordons were put in place for the safety of the public, and some properties evacuated.

‘Large plumes of smoke’ coming from the blaze prompted the fire service and police to call for residents to keep windows and doors closed.

The emergency services will remain on scene overnight.

A Devon and Cornwall Police spokesperson said: “A cordon and road closures were put in place for the safety of the public and to allow emergency services to deal with the incident.

“As part of the cordon, a number of properties were also evacuated.”

The fire service was alerted at 10.42am this morning, after receiving several calls reporting a fire at a business in Cowley Bridge Road.

Fire engines from Danes Castle and Middlemoor, Exeter, and Topsham and the aerial platform responded.

Further fire engines were requested, arriving from from Exmouth and Tiverton, along with the welfare pod from Ivybridge, incident command unit from Honiton, and incident support unit from Bovey Tracey.

Some ten minutes after fire crews arrived, a request was made to police for traffic control.

Shortly after 11am, a total of eight fire engines were on scene, with two extra crews drafted in from Cullompton and Budleigh Salterton.

The gas supply at the premises was shut off at the request of the fire service.

The fire service asked Network Rail to note the fire’s location, and made a request for caution on the nearby rail line, because of its proximity to the blaze.

After half an hour of fire crews tackling the blaze, police closed Cowley Bridge Road and a second aerial ladder platform from Torquay was requested.

Further specialist firefighting equipment was drafted in – the high-volume pump used by the Urban Search and Rescue (USAR) crew arrived from Clyst St Mary, along with an extra water bowser from Torquay, and the environmental protection unit from North Tawton.

By 11.30am the fire service had requested a total of 15 fire engines on scene, with crews arriving from Witheridge, Newton Abbot, Teignmouth, Buckfastleigh, Dawlish, Exmouth and Chagford, and another water bower from Plympton.

Shortly after midday crews confirmed asbestos was present, but said it was ‘lower hazard’.

Some two hours after the blaze began, Network Rail closed the line next to the fire site when police drone operators spotted a wall had fallen onto the track and alerted the fire service.

The blaze engulfed the whole building and fire crews were aware of low hazard asbestos at the premises, but said there were ‘fortunately’ no casualties.

By lunchtime crews turned their attention to stopping the blaze from spreading to adjacent buildings and thermal imaging cameras were used to track the fire.

Exeter City council environmental health officers were contacted by the fire service, making them aware of the smoke cloud and low-hazard asbestos.

Shortly before 2pm, residents living in the Cowley Bridge Road area were advised to keep windows and doors closed.

The rail line remained closed until shortly before 3.30pm and a structural engineer was called in about the collapsed wall.

The fire service is expected to scale down the level of cover throughout the evening, but remain on site overnight.

The majority of other road closures have now been lifted.

Dog treated with oxygen after fire in Exmouth home