Wednesday, February 26
Trending
You are at:Home»News»Exeter»Shut Exeter sports centre a step closer to being demolished to make way for homes

A closed Exeter sports centre has moved a step closed to being demolished and replaced with 44 homes.

The city council executive last week unanimously recommended the authority should loan its own house building company £15,643,478 for it to purchase the Clifton Hill site and progress with the scheme.

Some 33 houses and 11 flats are proposed.

The development would include the brownfield site of the rifle range, the derelict Clifton Hill Sports Centre, and a green wedge to its side.

A golf range and ski slope would remain untouched by the scheme, as would a green space to the rear of the plot – contrary to initial proposals which were reversed last year.

If it does, the city surveyor will be authorised to progress the disposal of the reduced site to Exeter City Living Ltd.

However, because the council has ‘undervalued’ the site by around £2million by not selling it for student flats, which would have gained the best value for the site, the decision will require the approval of the Secretary of State.

Councillor Jemima Moore, Independent ward member for Newtown, said the green space at Clifton Hill was one that she and the residents care greatly about.

Speaking at last Tuesday’s executive meeting, she said: “The council’s highly unpopular decision to sell and build on this publicly owned green space prompted much campaigning and local interest in saving the site.

“I believe the community may accept that the need for housing and revenue raising outweighs the loss of this portion of the green space, but if this compromise is to be made, assurances should be given so that the community can trust in the council’s plans for the wider site.

“The community may be reassured if we consider and indicate our intentions for the future of the land currently occupied by the golf driving range. 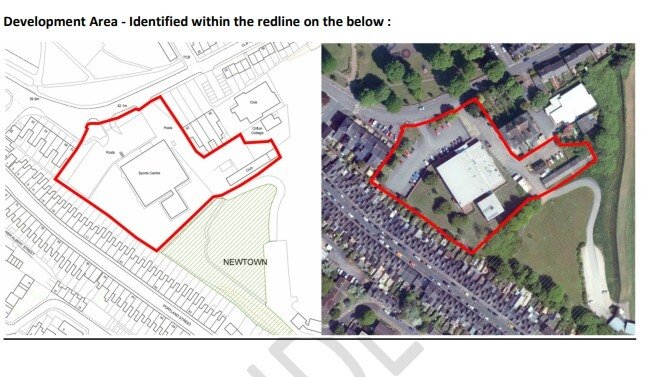 The proposed development area for the Clifton Hill site in Exeter is identified within the red line.

“When I and fellow campaigners conducted a survey to see how the community would like to see the land used, the responses overwhelmingly favoured the creation of an inner city nature reserve and I believe the golf driving range may – in time – provide space for such an amenity.

“I would be interested to know whether,  if the community accepts the development of the land at the side of the sports centre, can the council commit to keeping the land currently used as a golf range in community use, even beyond the end of any current tenancy agreements?

“It is important to retain the rest of the green space to be of real benefit for the whole community, and the current proposal – to sell to Exeter City Living to maximise revenue and ensure the council has greater control over what is built – is very much more satisfactory than the original proposal which would have left us at the mercy of private developers.”

Cllr Moore said she was pleased to see that the development would be low carbon and recognises a need for more affordable housing.

She felt it was unambitious to provide only 25 per cent of the development as affordable housing.

Cllr Moore added: “I hope it is now clear that it was a mistake to commit to sell the green space and a mistake to make financial commitments based on its sale.

“Selling off our green spaces to plug gaps in our funding is both short-sighted and unsustainable.

“If, due to these mistakes, we really must accept losing a substantial part of this green space, we must ensure that this never happens again.

“Ideally, I would like to see the plans revised to preserve the green space to the side of the sports centre.

“Of all the legacies that we may strive to leave as a council, accessible, biodiversity rich, inner city green space must be prioritised.”

Council leader Cllr Phil Bialyk once again reiterated that there was no intention or desire of his administration to build on any of the green space behind the sports centre.

“The land not identified for disposal will remain in our control.”

Cllr Bialyk said that the golf driving range and the ski slope are currently under tenant arrangement and it would be wrong to interfere with that, but, when the leases end, he does not intend to dispose of that land.

He added: “I told everyone that the green space to the rear would be protected.

“I told you I wasn’t going to build on it, or the driving range and the ski slope, and I have been quite clear, and I am standing by my pledges.”

The report of David Bartram – director, environment and city management – to the executive meeting outlined how the redevelopment would help to rejuvenate the area and remove the ongoing liability of the closed sports centre.

He added: “The development of 44 new homes is in accordance with Exeter City Council’s vision of high-density, high-quality, and environmentally-sustainable homes.”