Wednesday, February 26
Trending
You are at:Home»News»Exeter»Major refurbishment of Exeter Corn Exchange to be explored further – as brand-new theatre for city is now ‘unlikely’

Proposals to redevelop the Exeter Corn Exchange to more than double its capacity are set to be explored.

The city council’s executive last week unanimously agreed to support the premise of and ambition to revamp the entertainment venue in Market Street.

A major refurbishment of the standard required to uplift the audience capacity from 500 seated to around 1,000 seated and 1,350 standing spaces would cost around £30million.

This could also take around five years to complete and would see the theatre close.

Speaking at the meeting, Councillor Rachel Sutton, portfolio holder for culture, said that while the council would love to be able to fund a new theatre that the city deserves, it has to be realistic about the finances.

She added: “Nothing would give me greater joy than a report saying we can have a new city centre venue. Anything is possible if the pockets are deep to fund it, but the reason we are having another look at it as it is not a good time financially for councils, and I can see no reasonable way to put together a finance package for the new build that Exeter certainly deserves.

“We are having a look at the assets that we have and will see if there are any other opportunities to develop and improve the Corn Exchange, but there is an appetite for it and this leaves it open that, if other funding schemes come on board, we can look at them.

“But we do have to be realistic, and to get the funds for this we have to have plans developed and go through the various stages.

“I welcome that scrutiny are going to have a look at the idea to contribute to the process.”

Progressing the plans for the Corn Exchange will cost £200,000 to get to the preparation work and an additional £296,000 for the concept design.

Councillors were told that not preparing the Corn Exchange to RIBA Stage 1 (The Royal Institute of British Architects) means the project is highly unlikely to progress and get any Arts Council support. 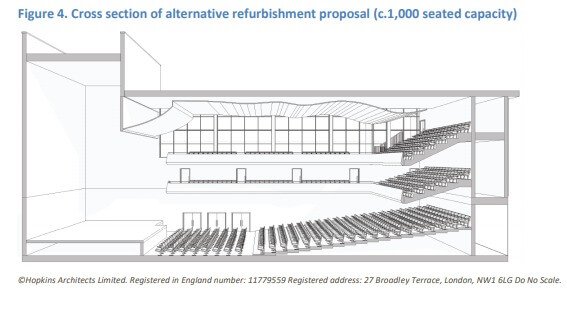 A cross-section of the alternative refurbishment proposal for the Exeter Corn Exchange.

Council leader Phil Bialyk said: “We have to be realistic on the options, but we are not just going to put this on the shelf and will ask scrutiny to look at the funding sources. We will be proactive, which is what we do as a city, but it is very difficult.

“We need to celebrate what we do have in Exeter, like The Phoenix and The Barnfield, and lots of others venues where amateur productions are performed.

“More importantly, we are the third best local authority with the maximum spend on culture – around 53p per head, which is way above and double most local areas.

“We are not shelving it and it is a passion we want to deliver, and we will try our very best to bring about the entertainment venue for Exeter that the people want.”

It had initially been hoped that a new entertainment venue for Exeter could be provided as part of the major redevelopment of the city centre.

The project in Paris Street, to be called CityPoint includes a new four-star hotel opposite John Lewis, a budget hotel in Sidwell Street, and the relocation of the Civic Centre.

It had also included the potential for a multi-purpose performance venue with a capacity of around 1,200 seated or up to 2,500 standing.

But Jon-Paul Hedge, director, in his report to the meeting said the projected cost for such a significant build is around £61.97million.

He added that there are no obvious funding routes to secure it and it would also fall short of many public perceptions of delivering a venue to rival the likes of The Theatre Royal in Plymouth.

The report stated: “Initial costings showed the capital cost of a multipurpose venue was likely to be prohibitive.

“To turn designs into reality, funding would need to come from a plethora of sources and the likelihood of garnering sufficient support to find the project at the scale and ambition is ‘low’.”

The executive noted the ‘low likelihood’ of finding external funding for a new £61.91million multi-purpose venue and to note the progress regarding a privately-funded commercial theatre for the city.

They also agreed to support the premise and ambition of redevelopment of the Corn Exchange, but for scrutiny to take a look at it and explore any funding sources.