Friday, August 19
Trending
You are at:Home»News»Sidmouth»Sidmouth will be first place in the UK to trial glass flood shield near shingle beach

Sidmouth will next week become the first place in the UK to trial a glass flood shield next to a shingle beach.

As part of work to progress the Sidmouth and East Beach Management Plan, a temporary glass splash defence test panel will be installed sometime next week, January 20, on top of Sidmouth’s existing sea wall, mid-way between the York Street and Fore Street road junctions.

The glass panel will for three months, until April, be exposed to the elements to see if it is a sufficiently robust form of flood defence for Sidmouth, said East Devon District Council (EDDC).

This is a UK first, as previously no glass panels have been installed next to a shingle beach…

A temporary sign will be installed adjacent to the panel to explain why the panel is there, and to invite comments.

EDDC said the positioning of the panel on the sea wall at the front of the promenade was to ensure maximum exposure to the elements and to monitor its performance next to the town’s shingle beach.

An EDDC spokeswoman said: “This is a UK first, as previously no glass panels have been installed next to a shingle beach.

“Although the panel has been factory tested, it is important to see how it performs as a form of coastal defence against real winter storms.

“It will therefore be tested until the end of April 2020, when it will be removed.”

The district council said the splash defence was needed to protect Sidmouth from flooding from storms, when large waves wash over the sea wall.

The councillors said they recognised people were concerned about the visual impact of a splash barrier, but added the esplanade was a conservation area so any scheme would need planning consent.

We, as ward members along with other councillors and the conservation team will want to make sure the defence does not harm the sea front or have a negative impact on tourism…

A collective statement from the councillors said: “We, as ward members along with other councillors and the conservation team will want to make sure the defence does not harm the sea front or have a negative impact on tourism.

“Access to the esplanade will be an important consideration too, with gates opened and closed appropriately.

“We are very interested to see the results of this test, and to use the information gained to move the project forward.”

EDDC said the new defence, if built, will be where the existing low splash wall sits between The Esplanade and the highway. 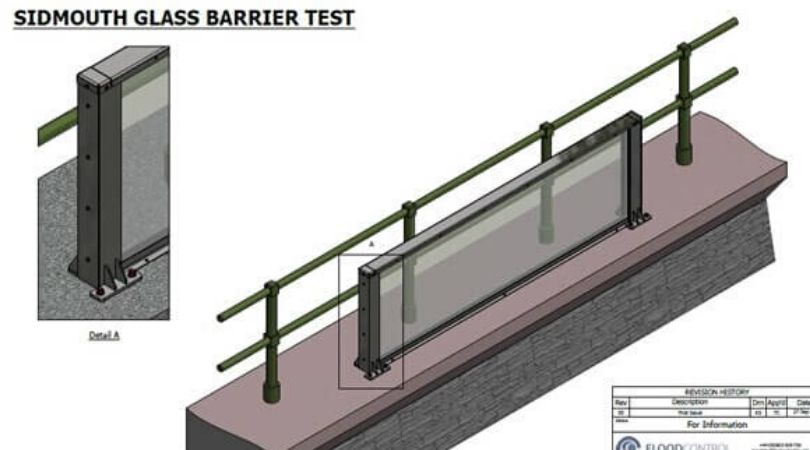 An image of what the glass splash defence will look like.
Picture: EDDC.

The EDDC spokeswoman said: “It is currently anticipated that this wall will need to be at one metre above the promenade to contain wave overtopping.

“Design details of the raised splash wall will be the subject of further work involving the Sidmouth and East Beach Management Plan steering group as well as future consultations.

“The sensitivities of any height increase to this defence are recognised and so a variety of design options are being investigated.

“This includes the possible use of glass sections of defence and this is the reason for the test.”

Cllr Geoff Jung, EDDC’s portfolio holder for the environment, said a heightened splash barrier will provide the flood resilience required for the properties and businesses in Sidmouth as well as reducing East Cliff erosion.

He said: “This is in response to increased severity of storms and sea rises due to climate change.

“It’s also acknowledged that a single solid barrier would have a severe visual impact on Sidmouth’s promenade.

“It is anticipated that glass panels may well provide a solution to the required protection and not impede the visual aspect of the much loved and historic promenade.”

He added: “A specific requirement of the government funding for this scheme is that every element must be adhered to and delivered in its entirety.

“Therefore, without the proposed splash barrier we will not receive any government funding.”

Following the test, EDDC’s project team and its flood defence consultants Royal Haskoning DHV will assess how the panel performed and review feedback from the public.

East Devon District Council will use the information to consider whether the glass panel is a viable solution capable of offering improved protection for Sidmouth.

In the South West, the Government is requiring coastal projects to have a minimum allowance for 1.2m of sea level rise in the future due to global warming.

Further information about the Sidmouth and East Beach Management Scheme can be found on EDDC’s website.