Monday, February 17
Trending
You are at:Home»News»Sidmouth»Trial to test whether raised splash wall on Sidmouth seafront could be made of GLASS

Driving forces behind a multi-million-pound bid to protect Sidmouth from flooding are to test whether a raised seafront wall can be made of glass.

Beach management scheme bosses have revealed they will stage a trial this month to gauge how a transparent ‘splash barrier’ can cope with the wrath of winter.

Glazed panels, gates and drop-down doors are among options for a one-metre-high structure that would span The Esplanade.

Controversial proposals to raise the sea wall form a crucial part of a long-awaited project to boost Sidmouth’s coastal defences and safeguard its crumbling cliffs.

A meeting of Sidmouth Town Council last night (Monday, January 6) heard work could start as early as next year. 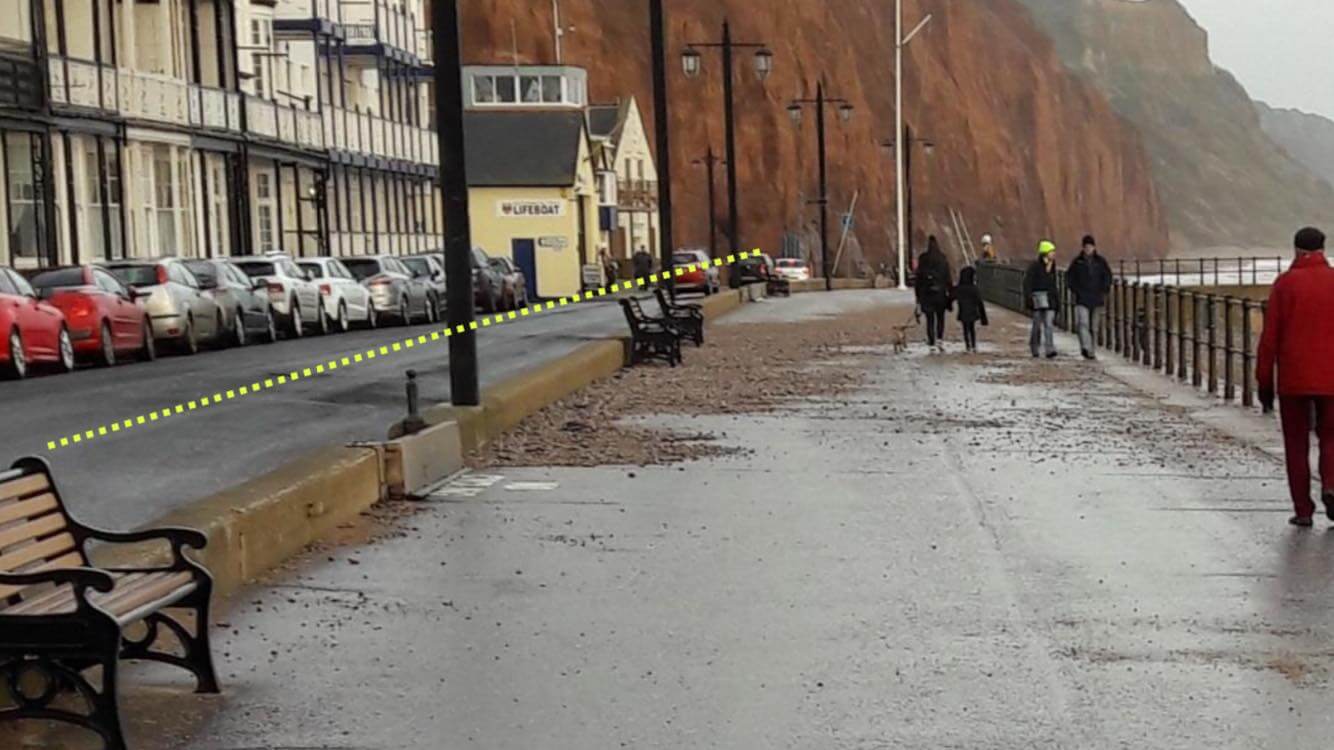 Councillor Geoff Jung, chairman of the Sidmouth Beach Management Plan Steering Group, told members: “We could actually enhance the seafront and incorporate the sea wall, but it will take a lot of thought, a lot of time and possibly more money – that’s the problem.

“We don’t need to have a wall all the way along.

“This month we’re going to be putting in a trial of glass to see if that survives the storms.

“In tests it has, but it hasn’t ever been tried on a pebble beach before, so it’s going to be interesting.”

“It would not need to be just concrete like it is now…it can be designed to have seating built within it, you can have planting in it.”

No matter what we do, we’ve got to have a splash wall – Cllr Geoff Jung

Cllr Jung, who is East Devon District Council’s (EDDC) portfolio holder for the environment, added of the mooted barrier’s size: “We’ve talked to engineers and they say the height has to be a metre, at least.

“They would prefer to see at least two metres, but that would be totally unacceptable to anyone that I know of.

“No matter what we do, we’ve got to have a splash wall.”

He said that, without it, the town will be ‘inundated with water’.

Shingle replenishment and periodic beach recycling – moving sand or pebbles from the sea bed to the beach – are also proposed, along with repairs to the River Sid training wall.

EDDC says a £1.5million shortfall must be filled by August – or it will have to pursue an alternative.

Cllr Jung warned that the raising of the sea wall was crucial to the entire scheme’s funding hopes.

Cllr Jung was updating Sidmouth Town Council at its first meeting of the year.

Cllr Louise Cole told him: “I feel, as a representative of the people of Sidmouth, in some respects that there is a sense of déjà vu, where something is progressing to a point and never getting any further.

“What is your sense of timescale? Where is there any type of commitment to realising this as an actual project?

“I can envisage this in five years’ time coming back here.”

Mr Jung said he intends to retire as a councillor in three-and-a-half years – and ‘would like to see it actually done, or in the process of being done’ by the time he stands down. 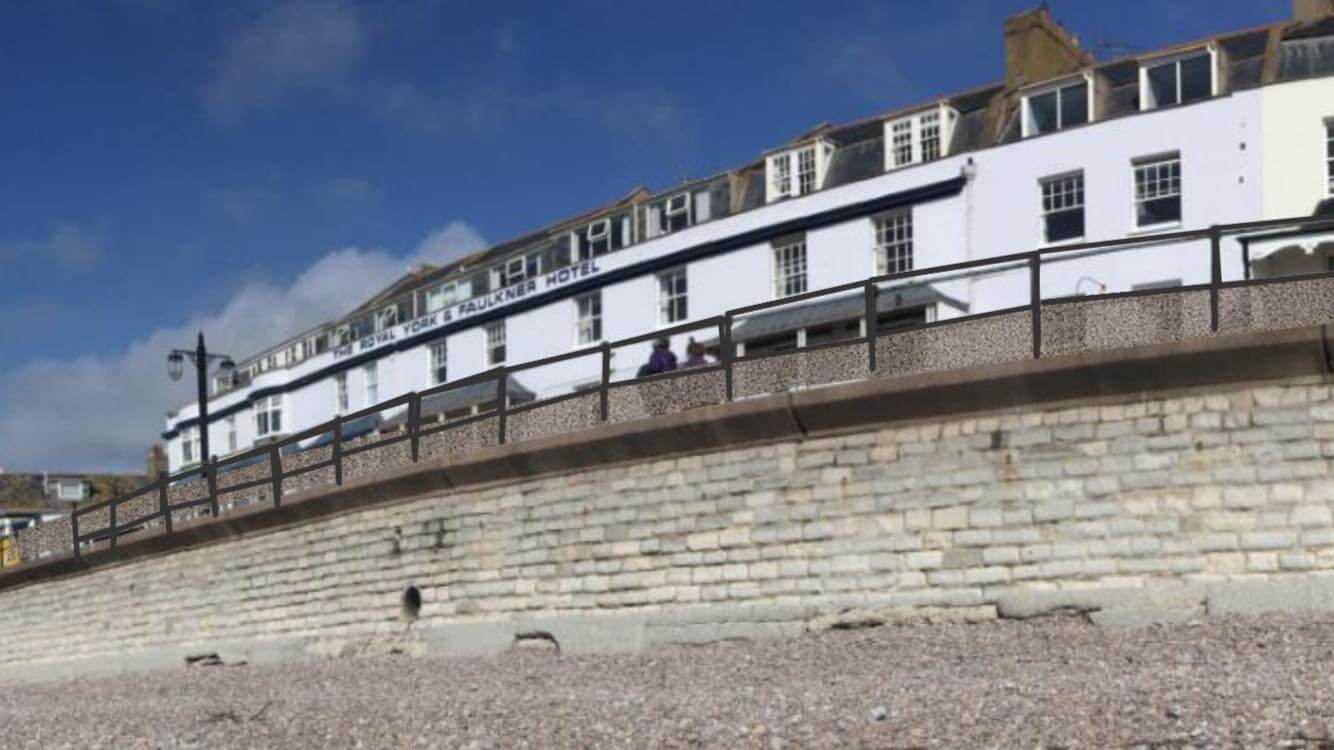 An example of how a glass barrier could look on Sidmouth seafront. Picture: EDDC

The meeting heard EDDC wants to test options for the wall by April and submit a planning application for the scheme in the autumn.

Members were told construction work could begin in 2021.

Cllr Denise Bickley said of different options for the wall: “I don’t want Seaton – we can’t have that, it would be horrible.

She added: “They’re talking about this quite attractive-looking glass panel which would be the part in front of the hotels.

“And then parts in front of the car park which would be a brick wall which could have seating in place in it and planters.

“They’re intending there would be lots and lot of gaps – at least 17 gaps, which would be permanently open.

“They’re talking about lots of different designs to all work together.”

Town council chairman Ian Barlow urged caution and warned that the options being discussed were currently ‘if, buts and maybes’.

He added: “The budget they’ve done – £1.5million – is for the Tesco’s basic value wall, which is the cheap one.

“So, if you start adding on things…glass…we don’t even know what the costs of that are yet.” 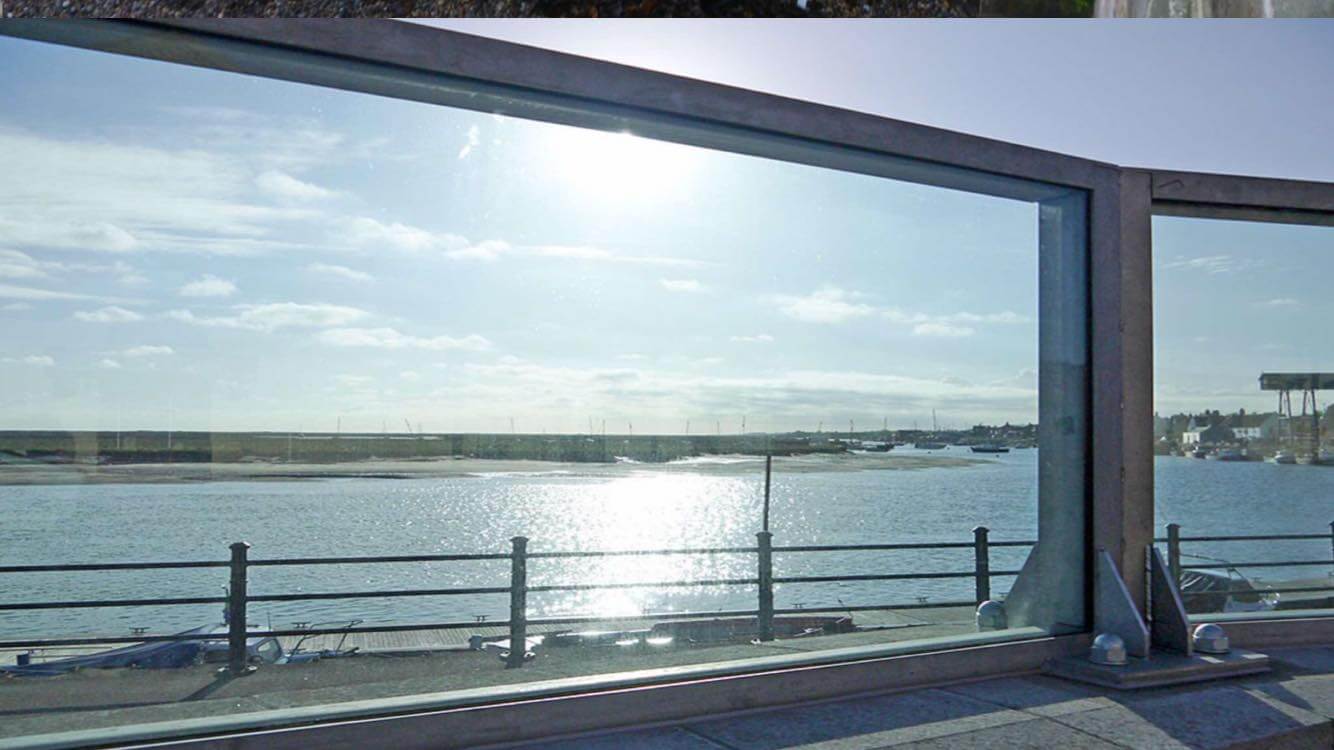 Glass flood barriers have been used in other parts of the country. Picture: EDDC

Cllr John Loudoun told colleagues: “Nothing is set in stone, no designs have been signed-off, this is all a process of consideration.

“It’ all a process of listening and trying to work out what we can get as best-value from the limited money we’ll have and try and accommodate a number of key stakeholders.

“It’s collectively everybody, and everybody’s going to have a different priority. And that’s going to be incredibly difficult and we’re going to end up hacking somebody off, somewhere along the line, but that goes with the territory.

“At the end of the day, doing nothing is not the answer.

“We cannot just sit back and say we’re not going to do anything because, frankly, I don’t want my name associated with that, in the future when someone says, ‘Why didn’t you agree to do X,Y and Z and now look at the state of the town’.

“We are looking towards starting working, at some point, next year. That’s important that the public know that – because for too long this has just sat there and festered.”