A Coldplay-backed charity rower from Exmouth has revealed she ate mince pies and sipped Prosseco in the middle of the Atlantic on Christmas Day.

Claire Allinson, of Moreton Crescent, set off on the 3,000-mile Talisker Whisky Atlantic Challenge on December 12, 2019, with the Oarsome Foursome, in aid of Exmouth and Lympstone Hospiscare, Cornwall Blood Bikes, and Carefree space charities.

We thought we were going to capsize at a couple of points. It was quite hairy…

Married Claire briefly put down her oars to speak to the Radio Two Good Morning Sunday team, telling presenters, Reverend Kate Bottley and Jason Mohammad, about the challenges the team has faced so far.

Claire, previously a non-rower taking on the challenge in memory of her dad, George Blagbrough, who died in August 2018, said: “The scariest thing was probably on the first night. We had a really hairy night, the weather really picked up.

“We got some really big gales. We got really big splashes of waves. We thought we were going to capsize at a couple of points. It was quite hairy.

“But other than that, we have just been in awe of the dolphins. We’ve had four pods of dolphins visit us. One was riding the crest of the wave. It was the most magnificent sight ever and we’ve seen a turtle as well.”

She said the woman were feeling ‘strong’ adding: “The weather is really, really hot. There’s no breeze whatsoever. It’s like rowing through glue at the minute but we’re having some great days where the wind is behind us and we are just riding the waves and having the most awesome time. It’s amazing.”

Claire is tackling the 3,000-mile, Talisker Whisky Atlantic Challenge – billed as the world’s toughest row – with Bird Watts, from Mevagissey and her mum, Mo O’Brien, who is deaf, from Penzance.

The trio left San Sebastian in La Gomera, the Canary Islands, on December 12, 2019, to row more than 3,000 miles to Antigua, arriving at Nelson’s Dockyard English Harbour in early 2020. 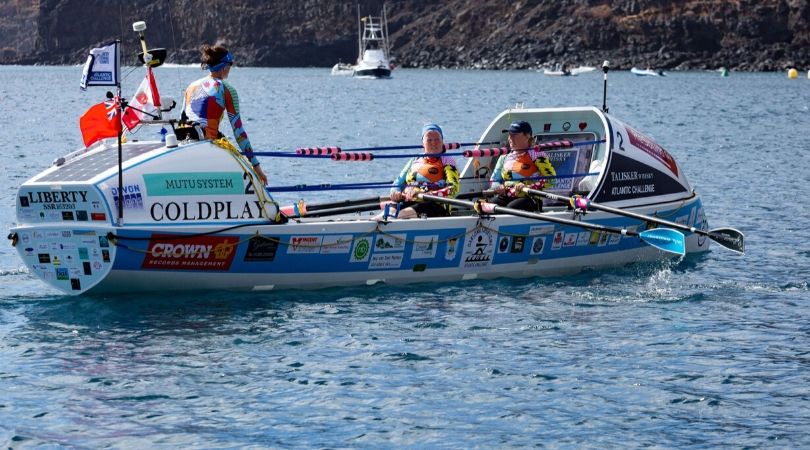 The Oarsome Foursome with their boat, Liberty.
Photo: Atlantic Campaigns.

Days before the team left to compete, fourth member Linda Whittaker, from Gorran Haven, was forced to pull out of the row and transfer to ground crew because of seasickness.

Claire said: “Linda unfortunately got really bad bouts of seasickness which we just could not control so unfortunately, because of the rescue operation which would have potentially had to occur, she had to stand down. But she’s definitely part of the team and she’s our land crew and she’s sending us a daily joke. They are so bad but they’re really funny. They’re keeping us going. And she’s also keeping family and friends updated as well.”

The women have had minimal contact with loved-ones as they make their way up the leader board to achieve their goal.

We’re very respectful of each other we all want to reach the end goal. We’re very much a team….

They all pre-recorded messages to family members whose birthdays they would miss while they were away, which Claire said was ‘emotional’.

Christmas Day was spent on the boat, with a short break to eat festive food and raise a toast to those back at home.

“Christmas Day at five o’clock we had mince pies,” said Claire. “I enjoyed a Prosecco. Bird enjoyed a dark rum, and Mo a gin. And we cracked on, rowing.”

She said team spirit remained strong even during times when emotions were running high.

“We’ve had some tears,” said Claire. “We’re very respectful of each other. We all want to reach the end goal. We’re very much a team.

“Because we’ve done so much training together, we understand each other a lot so we know when to bite tongues and just sit and ‘shh’. And we know when to give feedback in the right manner as well. It’s all good.”

When the women left La Gomera nearly a month ago, Coldplay’s Adventure of a Lifetime played out loud as a nod to the band who sponsored the boat for an undisclosed amount.

Coldplay fan Claire told Radio Two listeners how she plucked up the courage to tell Chris Martin’s dad about the rowing adventure at a chance meeting near Exeter last year.

We’ve had four pods of dolphins visit us. One was riding the crest of the wave. It was the most magnificent sight ever…

“Myself and Linda took Liberty, our boat, to Powderham to a BBC garden event,” said Claire. “Toby Buckland arranged for us to go.

“I am a huge Coldplay fan. I was talking to a chap and his partner and having a wonderful conversation for about half an hour as to why I am doing this as a non-rower, and telling them it was all in memory of my dad.

“He walked away and I knew straight away it was Anthony Martin, so I went and found him and asked him if he would ask Chris Martin if he would do a shout out on social media.

“Between them they got their heads together and Coldplay got in touch and said ‘we believe you’re still looking for sponsorship, what do you need and how can we help?’. And it just stemmed from there.”

Listen to the full Radio Two interview here. Follow the progress of the Oarsome Foursome here.

FIRST LOOK: Plans for 59 retirement apartments and office block on plot off Salterton Road in Exmouth are revealed