Thursday, May 28
Trending
You are at:Home»Features»PHOTOS: Fire service explains how quickly one candle can ruin your Christmas

It can take one small tealight candle to turn your Christmas celebrations into jingle hell.

I was lucky enough to invited by Exmouth firefighters to watch up-close how quickly fairy lights or a candle can set fire to a Christmas tree, decorations and presents – and it is an experience I will never forget.

You might think you would have time to deal with the emergency if your Christmas tree caught fire.

But it takes seconds for a tiny flame to engulf a tree and for poisonous smoke to build and kill.

The smoke alone was enough to kill – and now the heat had started to build. Just five minutes after the candle had been lit – the same time it would take for a fire crew to respond – the whole Christmas tree was alight, consumed by orange flames…

As East Devon residents approach Christmas Eve, with many spending more time at home now the schools have broken up and businesses have wound down for the festivities, don’t be tempted to leave your tree lights on while you go out – and never leave lit candles unattended.

Lyndon Mason, crew manager at Exmouth fire station, said: “Keep candles away from things that might catch fire, like the Christmas tree, Christmas cards, ribbons or other decorations.

“Always put candles out when you leave the room and make sure they are put out completely at night.

“Check that fairy lights are in good working order and replace any bulbs that blow. Don’t let bulbs touch anything that can burn easily such as paper or fabrics and always unplug your fairy lights when you leave the house or go to bed.”

When the firefighters invited me along to a training exercise, the crew put up a real Christmas tree adorned with decorations, and wrapped boxes for presents.

The decorated tree was placed inside a large metal shipping-type container and set alight – and within seconds the flames took hold.

On the walls behind the tree was what looked like chipboard – each board was as flammable as a video cassette and there to show what happens to furnishings, curtains and possessions when a room is on fire.

The metal container, with a split-level floor, simulates the home and where a tree would likely be positioned.

The lower level was an area were firefighters can safely crouch to watch and learn blaze behaviour, and experience the full force of smoke and fire.

Dressed in full fire kit of tunic, trousers, helmet, gloves, steel toe capped boots, flash hood, with breathing apparatus strapped to my back, I was invited into the metal chamber to watch, up-close, what could happen to your home should the worst happen.

A tealight candle was lit within reach of the tree branches. For around a second, nothing happened.

But left too close, in a blink of an eye, yellow flames crept around one of the carefully-wrapped presents.

Two more seconds and the flames had reached up and set the tree alight. Soon the whole side of the tree was on fire, crackling loudly, its decorations dropping from the tree onto the floor.

Because of the breathing apparatus supplying my fresh air, I did not realise how thick the smoke had grown around me.

Crouched down in the lower half of the container, the dense black poisonous smoke was just inches above our head.

The firefighters explained how in a home, smoke would now fill most of the room.

If you had dozed off on the sofa, or in your chair, you wouldn’t wake up, the fire crew told me.

Just five minutes after the candle had been lit – the same time it would take for a fire crew to respond – the whole Christmas tree was alight, consumed by orange flames.

There were no longer any presents or decorations. The tree itself was a skeleton of branches.

Over the firefighters’ heads, as they crouched on the floor, was a mixture of orange and black flames.

The intense heat, so strong it could be felt through the fire tunic jacket, would soon become unbearable.

You would not survive the heat and smoke.

When the fire crew turned a thermal imaging camera towards the blaze the temperature gauge shot up to almost 500 degrees Celsius. Put into context, water boils at 100 Celsius. 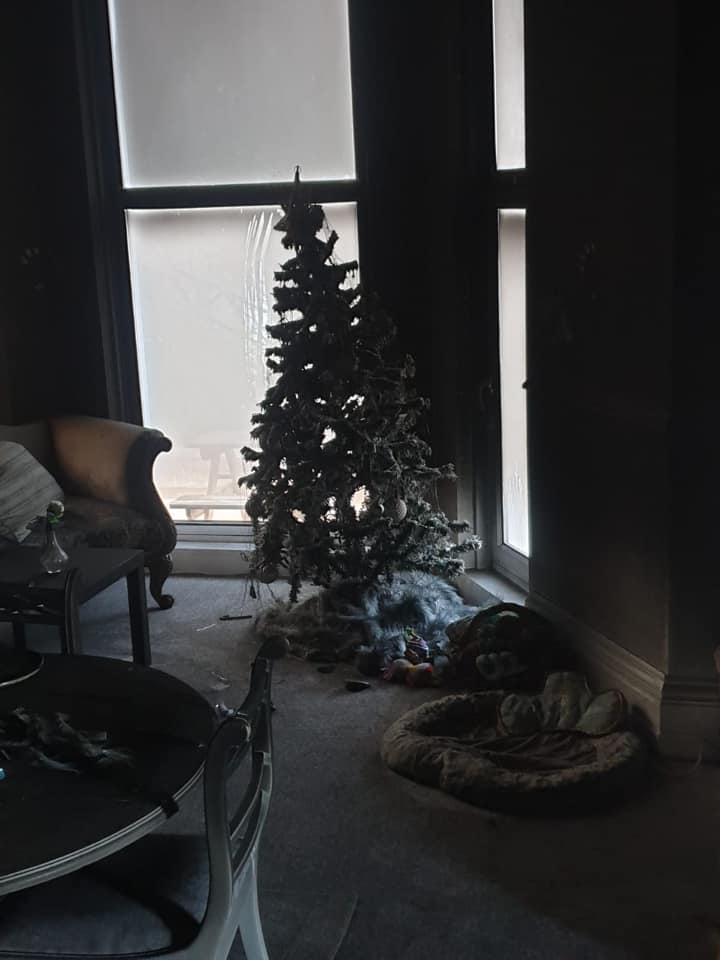 It takes seconds for a tiny flame to engulf a tree and for poisonous smoke to kill.
Photos; with permission DSFRS. 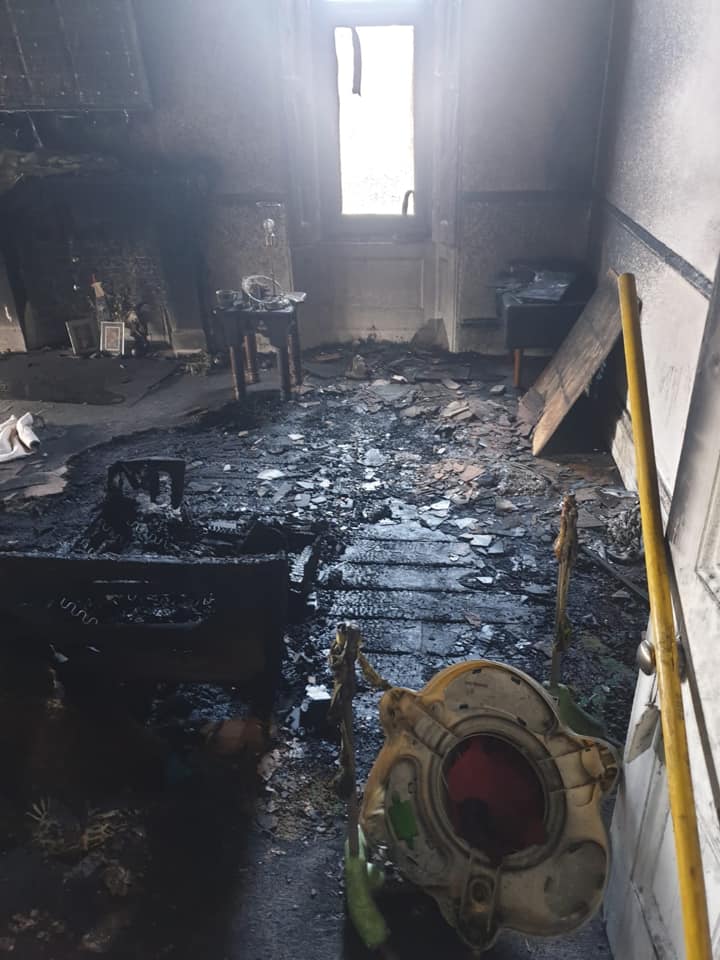 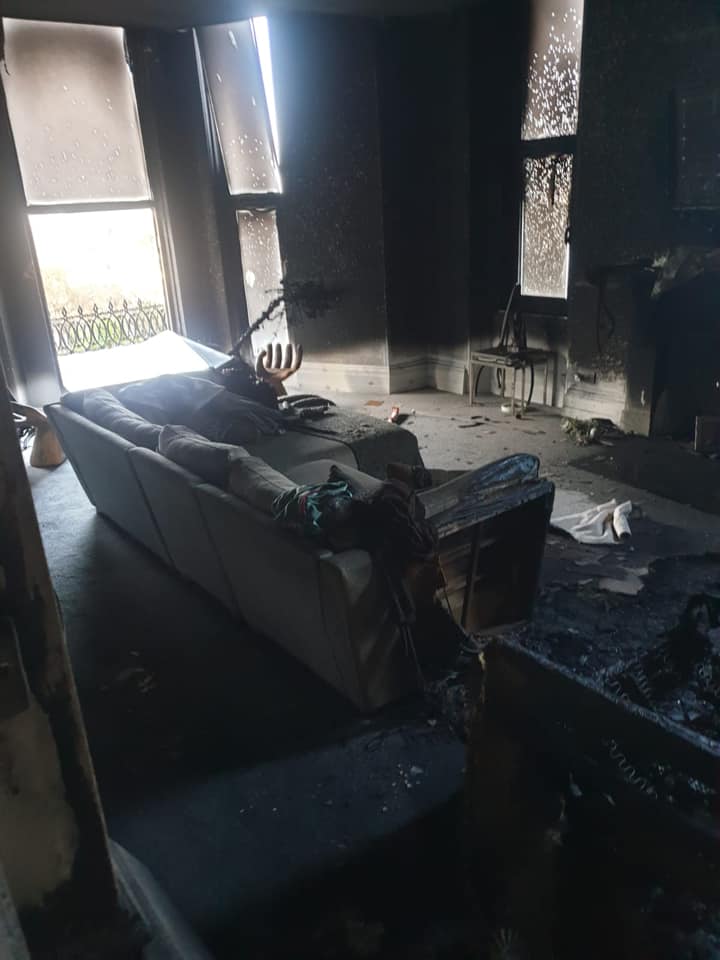 Devon and Somerset Fire and Rescue Service said more than 1900 accidental fires in the home started every year in the UK due to candles.

East Devon’s firefighters want you to have a happy and safe Christmas, so they have issued the following safety tips: