Friday, July 10
Trending
You are at:Home»News»Exmouth»Meet the man who ‘brings’ the famous to Exmouth – Kanye West, Ed Sheeran, Olly Murs

Rumour has it this is the man who ‘brings’ the famous to Exmouth through pranks that get the whole town talking.

Darrell Trigs, from Brixington, is responsible for telling the town Ed Sheeran was on Exmouth beach at the end of November – sparking a social media frenzy and a surge of seafront visitors.

Now Darrell wants to come clean – he has pranked the town with famous names before, but has paid the penance for his latest gag through a donation of sleeping bags to charity.

Darrell, 33 years old, said his latest wind-up – spinning a yarn Ed Sheeran was in Exmouth after the star was legitimately spotted in Exeter – was not his first, and certainly will not be his last.

If you fell for the rumour Kanye West was with his daughter and security entourage on Exmouth beach in 2015, after playing Glastonbury, or that Olly Murs was signing autographs outside World of Country Life, in Littleham, you were pranked by Darrell.

I want to apologise to the world about Kanye West. I found it hilarious. I am always tormenting people. That prank took a bit more thought…

But he ‘promises’ he was not behind the long-standing belief singer Robbie Williams has a dockside apartment.

Darrell posts his celeb ‘sightings’ on social media and lets the Exmouth rumour mill do the rest.

Before community pages were set up, Darrell contacted admins of the ‘Spotted’ pages or rumour groups.

Darrell’s most recent buzz attracted attention within minutes of his claim Ed Sheeran was in Exmouth.

He said some business have been in touch since the joke to thank him for the surge in seafront visitors out to spot the star.

Darrell said he ‘laughed all day’ at the spiraling gossip, that had ‘ninety-nine per cent of people’ smiling along with him.

“I had a couple of nasty comments saying ‘what a stupid thing to do, you have got all the teenagers looking for Ed Sheeran’.

“I thought it was fun waah!,” said Darrell.

“But I felt like I had to do something for the community after I tormented so many people and a lot of people left their homes on that day to go to the seafront, including my friends and family.

“My sister said ‘is it true Ed Sheeran’s on the seafront?’ I said ‘yes’ but I came clean later.

“I put it on Facebook, I didn’t tell anyone about it. I thought this will be fun. It started getting a lot of interest.

“Someone said they travelled up from Cornwall to see him and they are going to speak to a solicitor about taking me to court.

This is going to backfire on me. The whole of Exmouth are going to end up pranking me, but I can take it as much as I can give it…

“I love the reaction, it’s brilliant. It makes it worth it.

“There’s an old law, Trial by Combat, that says you can duel with swords. They bring the toughest person they have got in their business and I fight them. So, if they want a battle, I will have a battle.”

Avid followers of the Spotted in Exmouth Facebook page may remember the excitement when it was announced in April 2013 that X Factor star Olly Murs was signing autographs outside World of Country Life.

Then came the photos of Kanye West with his daughter ‘on Exmouth beach’ – submitted to Exmouth Rumour Service Facebook page four years ago.

The gossip spread to the other side of the world.

“I want to apologise to the world about Kanye West, said Darrell. “I found it hilarious. I am always tormenting people. That prank took a bit more thought.

“Sometimes I get bored and I wind people up. It’s just in my nature. I messaged Exmouth Rumour Service saying Kanye West was down on the beach with lots of security. It exploded. It was all the talk. There were people in Australia talking about it.

“I couldn’t tell anyone I had done it. I have always lived in Exmouth – everybody knows someone so you can’t keep a secret in Exmouth.”

“This is going to backfire on me. The whole of Exmouth are going to end up pranking me, but I can take it as much as I can give it.

“I am definitely not finished pranking. I will get people again. For now, I will let it go completely dormant. But it’s one hundred per cent not over.”

He added: “I promise you the Robbie Williams rumour is nothing to do with me. That’s been around since I was a kid. I can’t take credit for that. It may not be a rumour – it may be true.”

To say sorry to Exmouth for his latest prank, Darrell donated 20 sleeping bags to the Salvation Army for those in need. 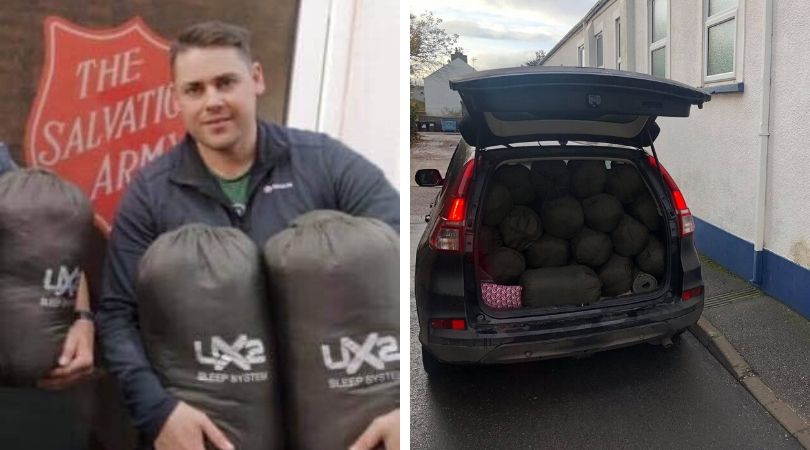 Remember these? Some of Darrell’s earlier pranks on social media