A Guinness World Record hopeful from Exmouth has managed to crochet her way to £2,475 for charity – by enduring her hobby for 24 hours straight.

Mum-of-two Natalie Morrison this week handed over the hard-earned proceeds of her epic challenge to a trio of good causes and said: “I won’t be trying again!”

Byron Way resident Natalie smashed her initial fundraising target of £1,500 and split the total raised between St Petrock’s, Knit for Peace and her own Rainbow Arch of Mind.

The 45-year-old will have to wait until early next year to find out if she has made it into the record books.

Natalie defied painful osteoarthritis in some of her fingers to completed the 24-hour crochet marathon on November 2 at the Wool on the Exe yarn shop in Exeter.

She overcame an anxiety attack at 3am to finish the epic endurance effort – and was the first-ever person to attempt the feat. 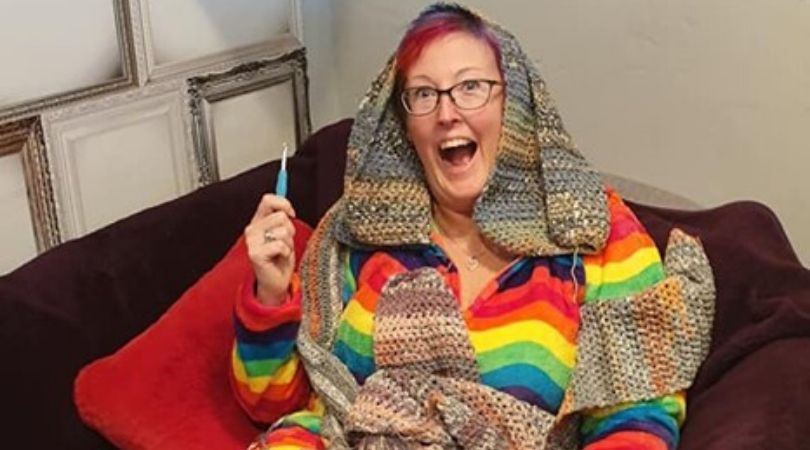 Exmouth mum-of-two Natalie Morrison took on a 24-hour crochet marathon in an attempt to break a Guinness World Record.

Natalie said yesterday: “I’m really pleased that I completed it, especially after having a panic attack at 3am.

“It was definitely mind over matter.

“Hopefully I will find out in 10 weeks or so regards to the record.

“But I know I did it even if they say no over a technicality and my aim was raising the money and making more people aware of mental health. I won’t be trying again though!”

She took on the challenge to increase awareness of how craft can help boost people’s mental health and to raise cash for a trio of charities.

Natalie, who has battled anxiety and depression, taught herself how to crochet five years ago and says it has become a ‘great coping strategy’.

Five scarves she created during the marathon have gone to homeless people in Exeter.

St Petrock’s is an Exeter charity for people who are homeless or vulnerably housed and the scarves Natalie crochets will go to the cause.

Natalie says she is passionate about mental health issues and ‘breaking the stigma’. She created Rainbow Arch of Mind to fund a website for mental health.

The day before the challenge, Natalie found out that her cause had officially been registered as a charity after a year-long process.