Exmouth Town Council has agreed to splash £158,000 of community cash on the long-awaited Dinan Way extension.

It is hoped the ‘missing link’ road will cut congestion and HGVs using the town centre by creating a new connection to the busy A376.

Devon County Council (DCC), the driving force behind the scheme, reached out to its town and district counterparts as a collective effort will unlock vital government funding.

Both authorities were asked to allocate Community Infrastructure Levy (CIL) money – secured from developers – to the link. 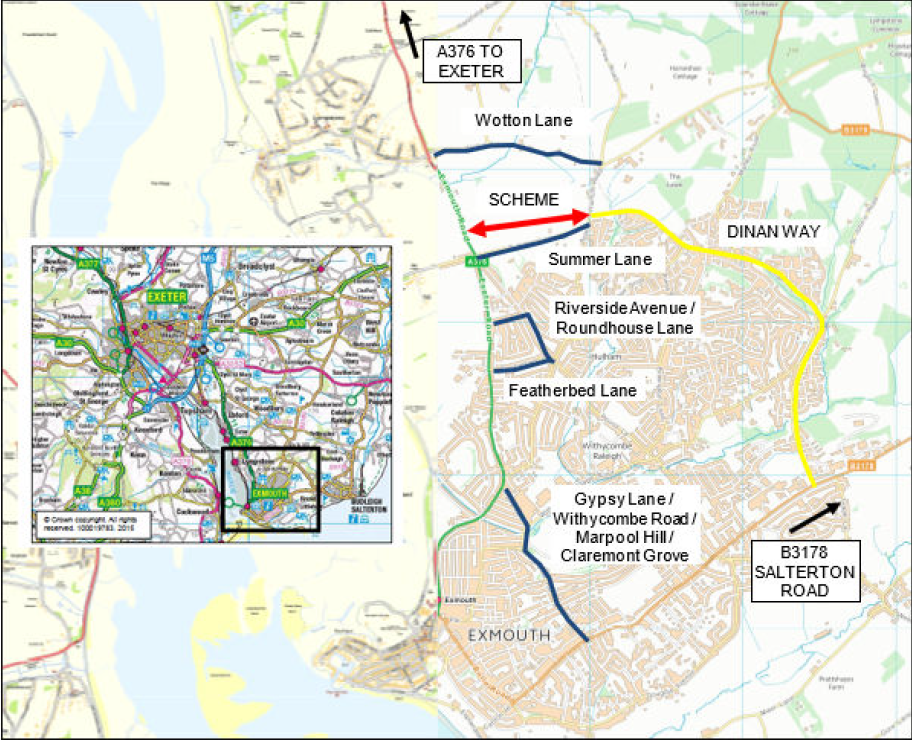 Plan for the Dinan Way extension were approved in 2017.

Exmouth Town Council was asked to contribute £158,000 – one per cent of the overall cost.

The sum is half of the total amount the authority currently has at its disposal to spend on community infrastructure schemes.

Town representatives, who debated the request last week, were told by county councillor Richard Scott: “This is a £12million investment in the town that you guys live in.

“I’d also like you to consider Woodbury in this conversation and the volume of traffic that goes through that parish village, which Dinan hopefully will relieve some of the issues that they deal with.

“You have got an opportunity here to hopefully solve a problem that has been going on for decades as I understand it.”

Planning permission for the Dinan Way extension was granted in 2017 and DCC has targeted government money from a ‘pinch-point’ fund to help finance it.

Councillor Brian Toye told the meeting: “I totally agree with taking heavy traffic out of town.

“This is, to my mind, [the]second-best answer to the problem. It doesn’t answer the problem of congestion on the A376.

“We are the largest town in Devon and we’ve got the worst bloomin’ access road.”

Cllr Toye added that DCC had ‘agreed to pay for the road some time ago’.

He said that the town could ‘better use’ its CIL money on pedestrian crossings – and even a bridge – along Dinan Way.

Cllr Olly Davey said the amount being asked for was half of the town council’s CIL money, adding: “It was expected we wouldn’t be asked to contribute.”

He suggested an alternative of committing £50,000 and said: “It is a very large amount of money and means there will be an awful lot less for infrastructure projects that we sorely need such as cycle routes, possibly investigating areas for a park-and-ride, walking routes and the other things the town actually needs – rather than making it slightly more convenient for people from Brixington to get to Exeter.

Cllr Alex Sadiq said: “The traffic is going through the town at the moment, it is dangerous for schoolchildren around the college.”

On the town’s current public transport situation, she added: “It would take longer to get from where I live in Brixington to Exmouth than if I was to get in the car and drive to Exeter – it’s just not feasible for me at the present time to do that. I’m sure it’s exactly the same for many other people in that area.

“Although I see there’s no promise of the bus schemes [using the new link], this is an enabler for that.” 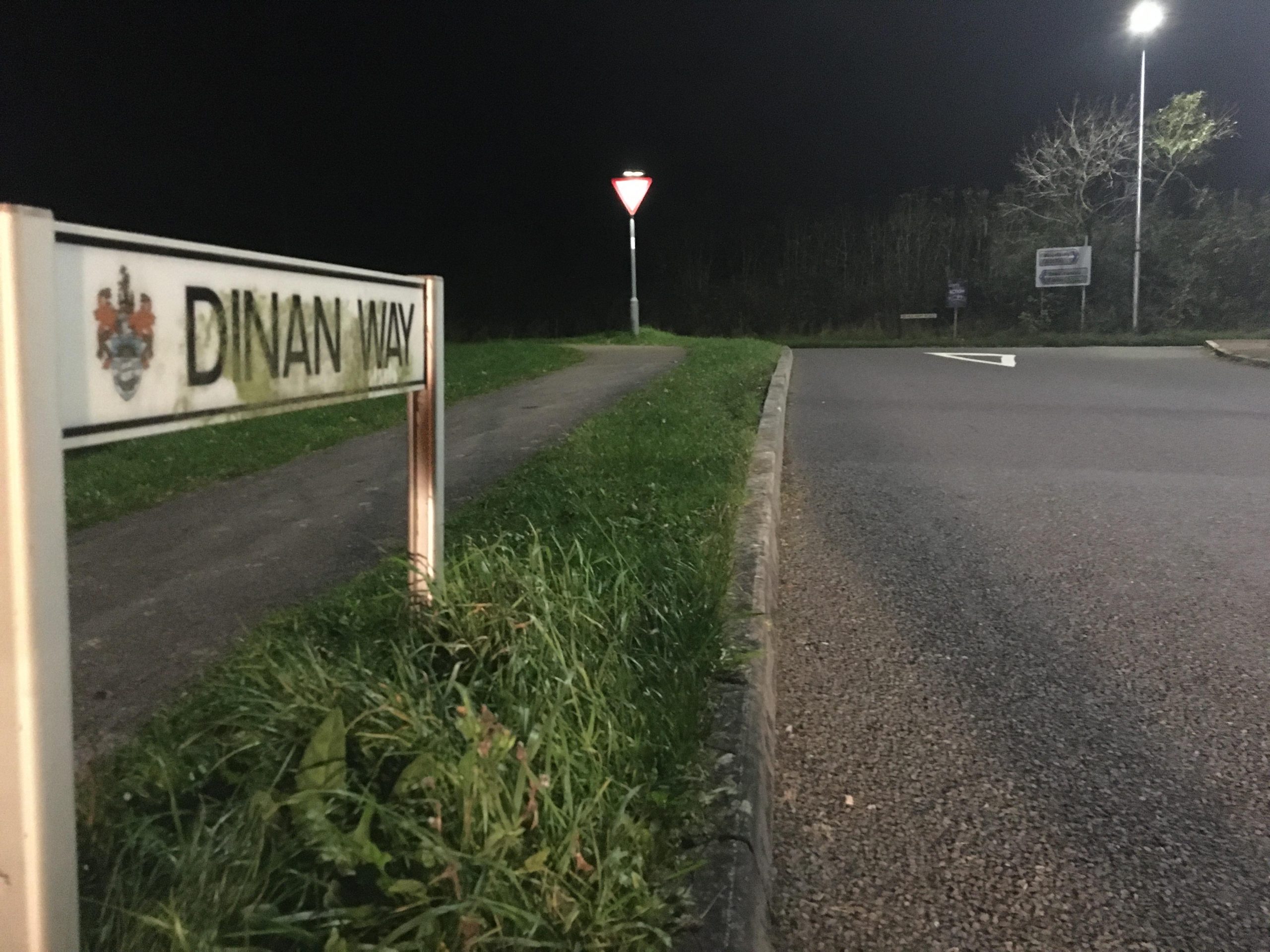 Cllr Andrew Colman was against the proposal. He said: “On its own I can’t support it. I think that CIL money should be used for more environmentally-friendly purposes.

“We’re living in a bit of cloud cuckoo land if we carry on with traffic growth as we are.

“It just makes a bit of a mockery of a commitment to a climate emergency.”

“Once again, we’ve got a very busy holiday park, Haven Holidays – Devon Cliffs. I suspect many tourists heading for Devon Cliffs will use the new Dinan Way.

“There needs to be a lot of careful thought into this project.

“I think we need to look at the whole safety of the road in the future. So, if it does go ahead and we build the missing link, then we’ve also got to look at provision for some better safety measures.”

Members voted 19 to two in favour of the move, with two abstentions.

A DCC spokesperson said: “The contribution towards Dinan Way will enable a future bid for government funding.

“The scheme will reduce HGV traffic through the centre of Exmouth, while also improving bus route options and providing new cycle connections to the Exe Estuary Trail. Design work on the plans is ongoing.”

An Exmouth representative at County Hall addressed a number of issues as town councillors debated whether to contribute £158,000 of community cash to the Dinan Way extension.

Councillor Richard Scott told the meeting there are 18,500 vehicle journeys on the A376 in a 12-hour period each day – with Exmouth residents travelling to work in Exeter and elsewhere.

He added: “If this road is built, half [of those people]will have a choice in how they get to work.

“If you live in the northern side Exmouth at this moment in time, your choice is very limited.

“So this road will allow those connections.”

Cllr Scott said the link would also boost the environment by reducing congestion, idling engines and HGVs having to operate in lower gears.

“We want to get these trucks onto the right road, to get them to the right place in a speedy fashion, which this extension will allow that to happen,” added Cllr Scott.

Improvements to the A376

Cllr Scott said the ‘extremely busy’ A376 has now been designated as a part of major road network – meaning Devon County Council (DCC) can access funding from the Government for upgrades.

“The 376 does need work doing on it, but we have to bid to that fund to sort the choke points, particularly for Clyst St George,” he added.

“It is a safe road as it sits,” said Cllr Scott, who lives on the northern side of Dinan Way and regularly crosses the road with his two young children on their bicycles.

“We did address the 376 in terms of crossings to allow people to access the cycle trail there.

“I have every confidence, there are also funds available for us to get crossings to align cycle trails. We have to have everything in place to do that.”

Cllr Scott added: “In reality, crossings do have to be funded from developers. They are not funded through capital spending though the county council.

“We’ve already requested and made our point extremely clear in our conversation with the [DCC] officers that we expect the existing Dinan section to be dealt with at the same time as we deal with the extension.”

In terms of the extension, he said speed restrictions on the new link would need to be established.

“The Dinan link effectively joins the cycle route for north Exmouth into the strategic cycle network which goes all the way around the Exe Estuary,” said Cllr Scott.

“At this moment in time, the north parts of Exmouth aren’t accessing that route, so the county council over the last 10 years has invested £17million developing that trail.

“That trail allows people to get to work in Exeter, so bear in mind that more people leave Exmouth to go work outside of Exmouth.”

“It does have a say and it does have influence over commercial operators over where the buses go.

“It doesn’t control it, but it does have a say.”

Cllr Scott told town councillors: “If this was a true climate emergency, then I would challenge to ask what are you doing about it?

“There’s more to a climate emergency – you’re talking here two, three decades of investment and change in how we use infrastructure.

“The requirement now to reduce vehicles is going to disappear.

“Electric cars and hybrid cars are going to remove the argument as to why we have to get rid of cars. Because they’re no longer putting emissions out.

“You likely will see traffic increase.

“What will reduce traffic is a change in how people work and how we move people around.”

Cllr Scott said this was a national issue, adding: “Ultimately, every single one of us in this room is entitled to work where we please and it’s not for the Government or for any councils to tell us any different.

“It’s their job to put infrastructure in place, put plans in place to allow us to get to our place of work, to allow us to provide for our families, and to allow our communities to grow.

“The climate emergency does not change the requirement for sustainable communities and we still need infrastructure.”