Failure to back a new seafront hotel to fund Exmouth’s regeneration could end in higher council tax, the district leader has warned.

Cllr Ingham was accused of ‘foisting’ a new hotel on Exmouth and blackmailing the town to accept – using threats of higher council tax if residents failed to support a new build.

The EDDC leader’s comments were made during a presentation led by seafront designer Wayne Hemingway.

Cllr Ingham said: “We have done phase one and two, which has cost quite a lot of money. We have to cover our backs, having done that, and there are two ways.

“We can build a hotel and sell it and pay off all those debts. That would be a quick way of doing it. Personally, I am dead against that because then you no longer own that.

“If you have to do something like that perhaps you want to do it as a lease over a number of years, then you get that back. Then you have made money and all of us can take advantage of that in future projects.

“Or the money that’s already spent, we can all chip into. We have only got so many options. It’s up to you to help us to decide and as to whether we would ignore you, if you say you really don’t want a hotel that would be really dangerous.

“If that’s what you want, and you want higher council tax, we can do that.”

He added: “I am just saying, somehow or other, we have to complete this. It’s taken a long time we have made some commitments.

“Personally I wouldn’t have started the journey from where we did and we wouldn’t be where we are now, but the fact of the matter is this is where we are, and I’m saying if you don’t want a hotel we have got to come up a really good idea to replace it and when you listen to what Wayne has told us, I have gone from thinking from the beginning of this year ‘there’s no way we should have a hotel’.

“I met Wayne and listened to what he said and I thought ‘Ben you have got to think again because what he’s saying makes a lot of sense’.

“And I much prefer that from burying my head in the sand and thinking we can do something else where a lot of people, one way of the other, are going to have to pay that bill.”

Mr Hemingway said attracting the under-25s and under-35s, and their disposable income, was the way forward for Exmouth seafront, and building boutique accommodation on an area within the final redevelopment site would encourage Millennials and Gen Z to spend and stay.

He said overnight beach stays will fit in with the aesthetics of the ‘meanwhile space’, (Queen’s Drive space) which has become ‘embedded in the community’ benefiting the town.

We have to do something commercial to pay for it rather than borrowing, or higher taxation…

“Don’t assume the accommodation will be a block,” said Mr Hemingway. “The whole point of the hotel is open space and the fluidity.

He added: “The opportunity is that you haven’t got a hotel that is fit for purpose in this town – and that’s the opportunity. And you have got space to put it there.
“Even with that hotel there, you have still got two-thirds of that bit of the site still for open space for kids to play. The worst-case scenario is, it will leave you with two-thirds of the space.”

Mr Hemingway said the decision to build boutique hotel accommodation lay with the community, not him as designer, adding ‘nothing that’s being proposed here is weird or dangerous – it’s just life.”

He said: “We are totally open to your responses. I can absolutely guarantee there’s no closed shop here. It’s a robust discussion between where the money comes from and what everybody wants. But do think about what people have been saying, and thinking, about the future. The taste of the world has never changed as much as it has at the moment and it’s changing for the better.

“You are not investing £18million and that fantastic – then you change it in three years and change is good. Change should be good in places like this. Young people want change.”

Mr Hemingway added: “It was Facebook and now that’s for the old people. Then it’s Snapchat and that’s gone. Then Instagram, now its Tik Tok and once it was eBay and now its Depop and that’s fantastic.

He said:  “Using that space for a little bit of commercial and a lot of social is really where we are trying to go with it.” 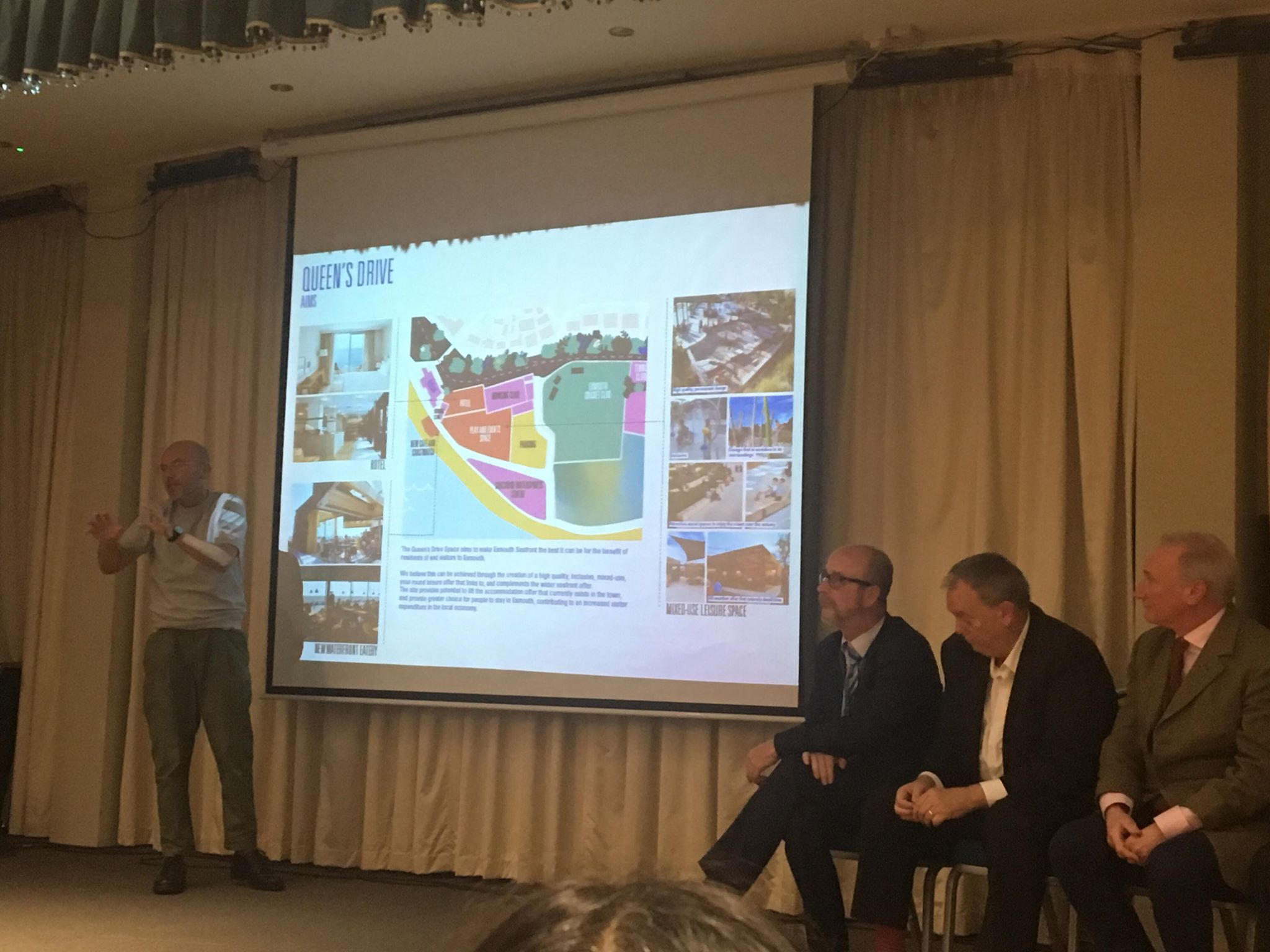 Kevin Blakey, EDDC portfolio holder for economy, said: “The whole point to that hotel is this open space and the facilities that are going to go on there, whatever they maybe post-consultation, they have got to be paid for somehow.

“We have to do something commercial to pay for it rather than borrowing, or higher taxation.

“The point is to make this place sustainable commercially and physically in the long term.”