Musicians helped make East Devon’s very-own night at the proms a fitting tribute to the event’s  inspirational late founder – as the event achieved his fundraising dream.

Classics Galore! was established by former Exeter policeman Dick Passmore and has been staged every two years since 2007 to boost FORCE Cancer Charity.

The seventh concert at the University of Exeter Great Hall on Saturday was particularly poignant following Mr Passmore’s death earlier this year. 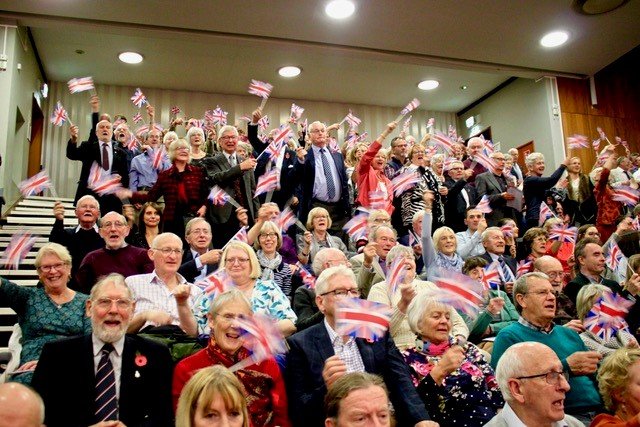 The award-winning swcomms band from Lympstone and Ottery St Mary Choral Society helped make it an evening to remember with tears, tributes and plenty of rousing musical moments.

Everyone involved was determined to make it a special night in Mr Passmore’s memory by reaching his goal of raising a total of £100,000 for FORCE.

It was another fantastic success, with more than £21,000 raised for the area’s leading cancer support charity – taking the overall total well beyond that six-figure target.

Mr Passmore’s widow, Posy, who worked alongside him to organise the first three Classics Galore! extravaganzas, bravely took to the stage to say: “Thank you for supporting me, for supporting FORCE, who are so very special, and for remembering Dick.” 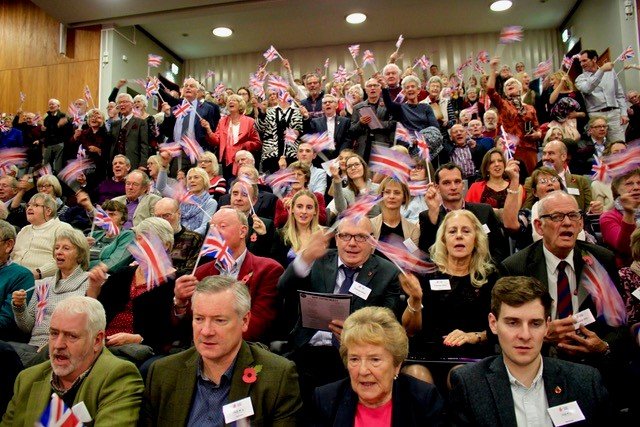 Flying the flag for FORCE.

FORCE chief executive Meriel Fishwick paid tribute to Mr Passmore and to the hard work and dedication of everyone who made the hugely popular event such an unqualified success.

She added: “Dick, we salute you and Posy, where words fail, music speaks.”

The profits from this year’s concert will go towards funding the delivery of chemotherapy for cancer patients in Okehampton, Tiverton and Honiton. 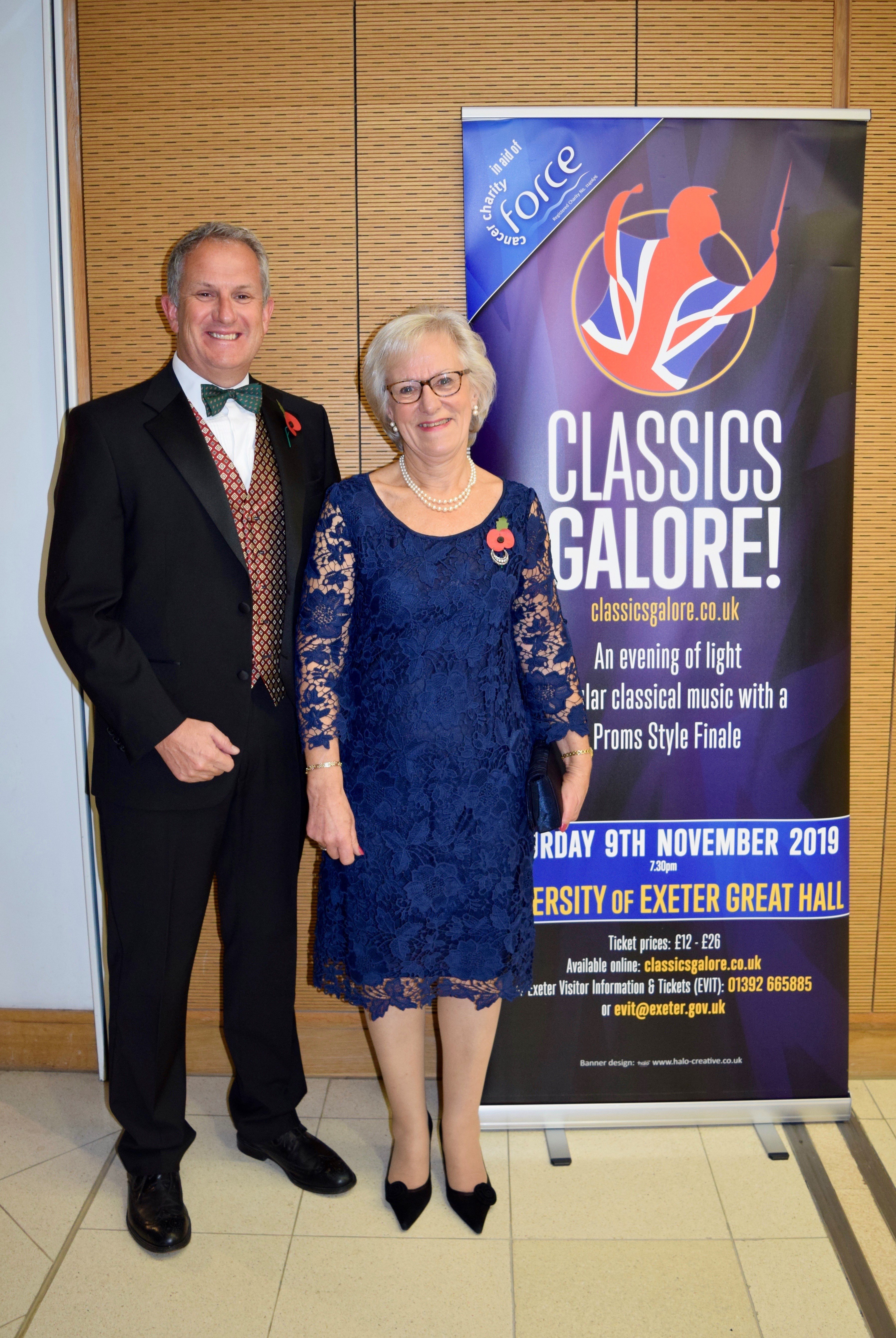 FORCE pays for specialist nurses from the Royal Devon and Exeter Hospital to administer some of the more straightforward treatments at weekly clinics in all three towns, saving patients the potentially more stressful journey to Wonford whenever possible.

They performed a blend of popular classics and songs from some of the world’s most beloved musical theatre, including many of Mr Passmore’s favourites that had the audience of more than 1,000 on their feet in celebration. 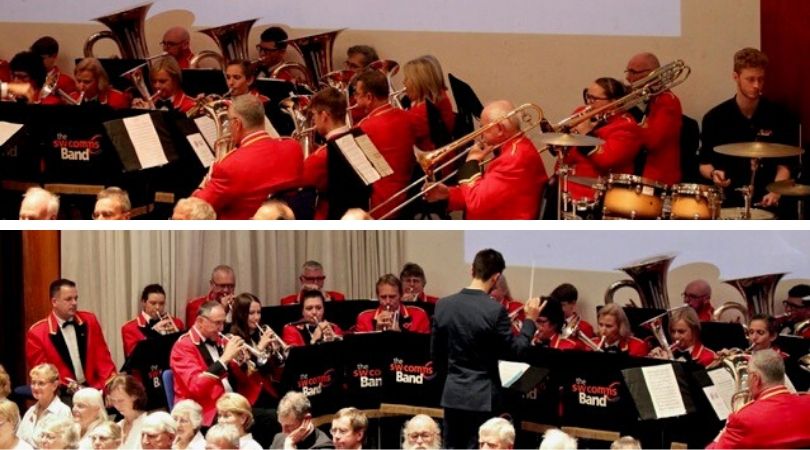 Among the many highlights were excerpts from Zadok The Priest, Mary Poppins, Gladiator and the William Tell Overture.

There were sing-along, flag-waving sections and the evening, compered by Mark Tyler, culminated in a rousing Last Night of the Proms style finale, led by soprano soloist Penny Daw.

Peter Payne, chairman of the committee that organised the event said: “On hearing that Dick had passed away in February, we resolved to work even harder to ensure that the concert was as good as it could be, something that Dick would have been proud of and which his vision and drive deserved. 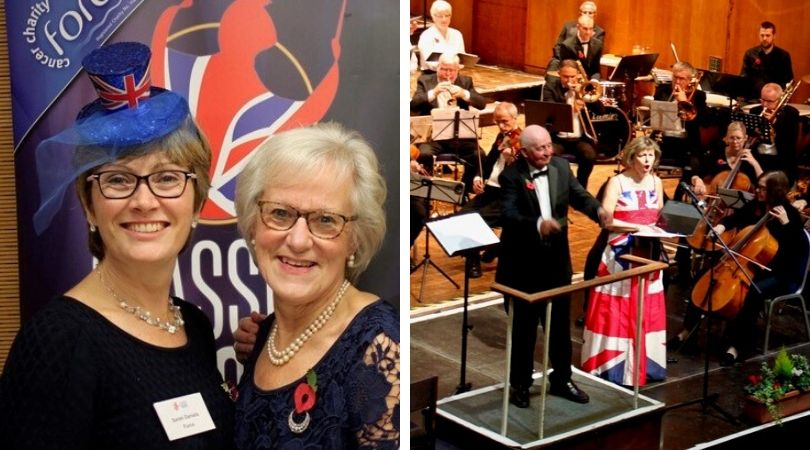 “I am delighted that we have been able to reach Posy’s and Dick’s dream goal of raising more than £100,000 from these concerts to help FORCE Cancer Charity.

“I am so thrilled that the concert was such a success. The Great Hall was full and the audience was treated to a night of wonderful music, including some of Dick’s favourite pieces.

“It was a colourful, joyous and memorable evening and one which I am sure will live in our memories for a very long time.”