Otterton has honoured 16 of its fallen soldiers by inscribing each of their names on new waymarkers across the parish.

The heroes, who made the greatest sacrifice and lost their lives in World War One, have been commemorated as part of the Remembrance project.

A century ago on November 11, 1919, the people of the village joined millions of others across the country and fell silent for two minutes.

They did so to honour their husbands, sons, fathers and brothers who gave their lives for their country in the Great War.

By the following summer, the villagers had raised enough money to erect a permanent tribute to those who had died.

On August 1, 1920, the Otterton Memorial Cross was unveiled at a ceremony attended by the then-Lord Clinton.

Today, the men whose names are inscribed on that memorial cross are again being honoured as each has his name on one of 16 new timber memorial waymarkers. 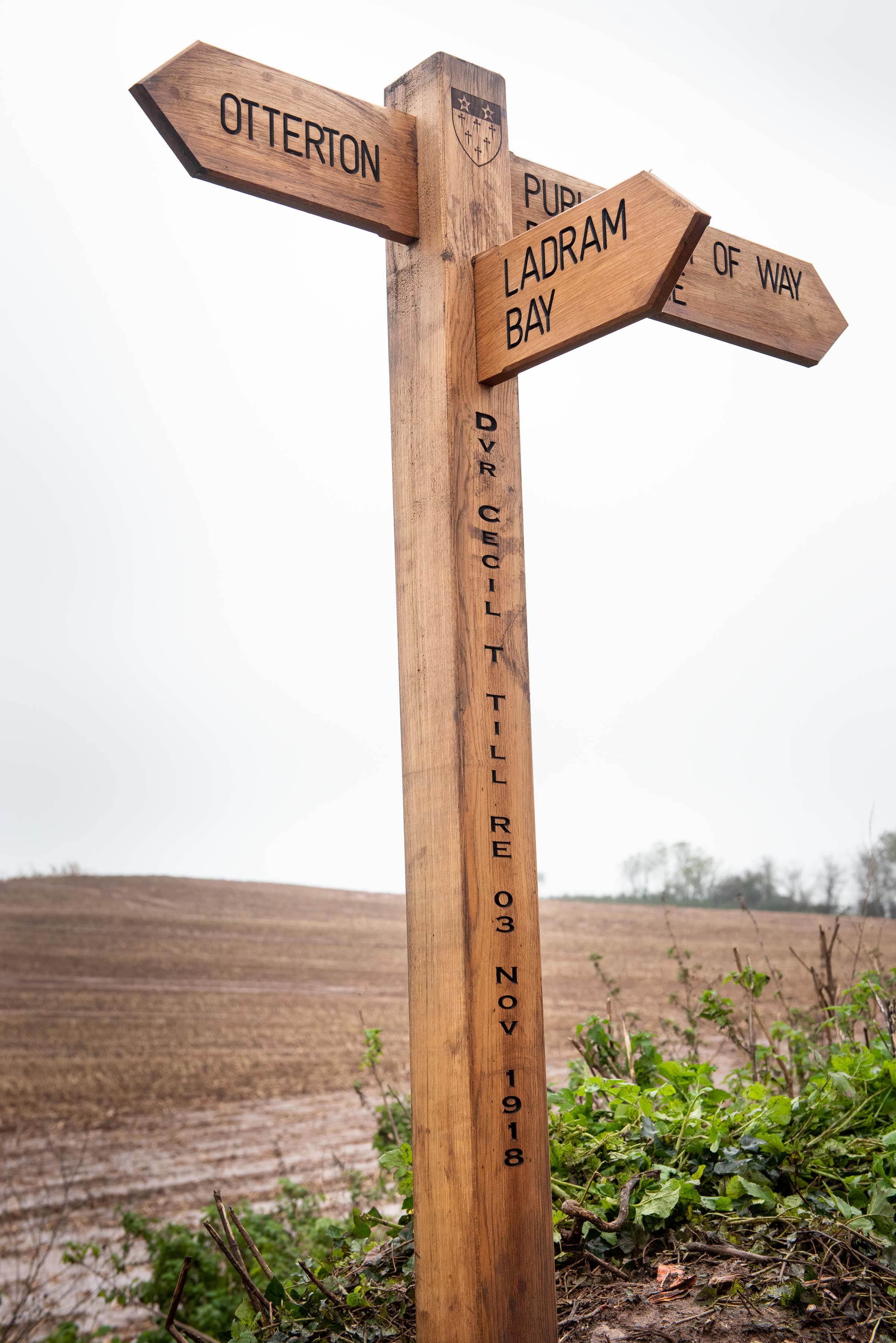 One of the new waymarker signs that honour the World War One heroes in Otterton. Picture: Guy Newman/Rekord Media

It has been funded by Otterton Parish Council through the Parishes Together Fund and supported by Clinton Devon Estates and Ladram Bay Holiday Park.

The new waymarkers will replace old ones which were weather-worn and beyond repair.

Otterton Parish Council chairman, Councillor John Hiles, said: “We realised that there were 16 old waymarkers which needed to be replaced, which coincidentally was the same number of names on the World War One faces of the memorial cross.

“So we thought it would be appropriate, and fitting, to give each of those men their own waymarker, so their names would perhaps be seen more often, and their sacrifices not forgotten.”

Among those honoured is Cecil Till, who was born in Otterton on December 28, 1890, and before enlisting worked as a groom and gardener. He joined the Royal Engineers in Otterton on September 18, 1914, with the rank of Driver.

In 1917, Cecil married Alma Payne, the sister of Hubert Payne, who is also named on the Otterton memorial.

They had no children, and Alma never remarried. She is buried in the same grave as her husband.

Cecil was wounded in France in March 1918.

While recovering at a military hospital in Brighton,  hedied of influenza and pneumonia – just eight days before the November 11 Armistice.

He was the last of the servicemen from Otterton to die in the Great War.

Otterton-born and bred Petty Officer Wallace Harding is another of the men whose names are inscribed on the new waymarkers.

He died aged 39 when the vessel he was serving on, HMS Bergamot, was sunk after being struck by a German torpedo to the north of Ireland in August 1917.

Originally from Plymouth, Petty Officer Telegraphist Robert Larcombe was 21 when his parents moved to Otterton upon his father becoming the village’s railway station master.

He married Minnie Murgatroyd in 1910 and served on a Royal Navy submarine during the Great War, losing his life at the age of 36 when one of the craft’s batteries exploded in December 1916. 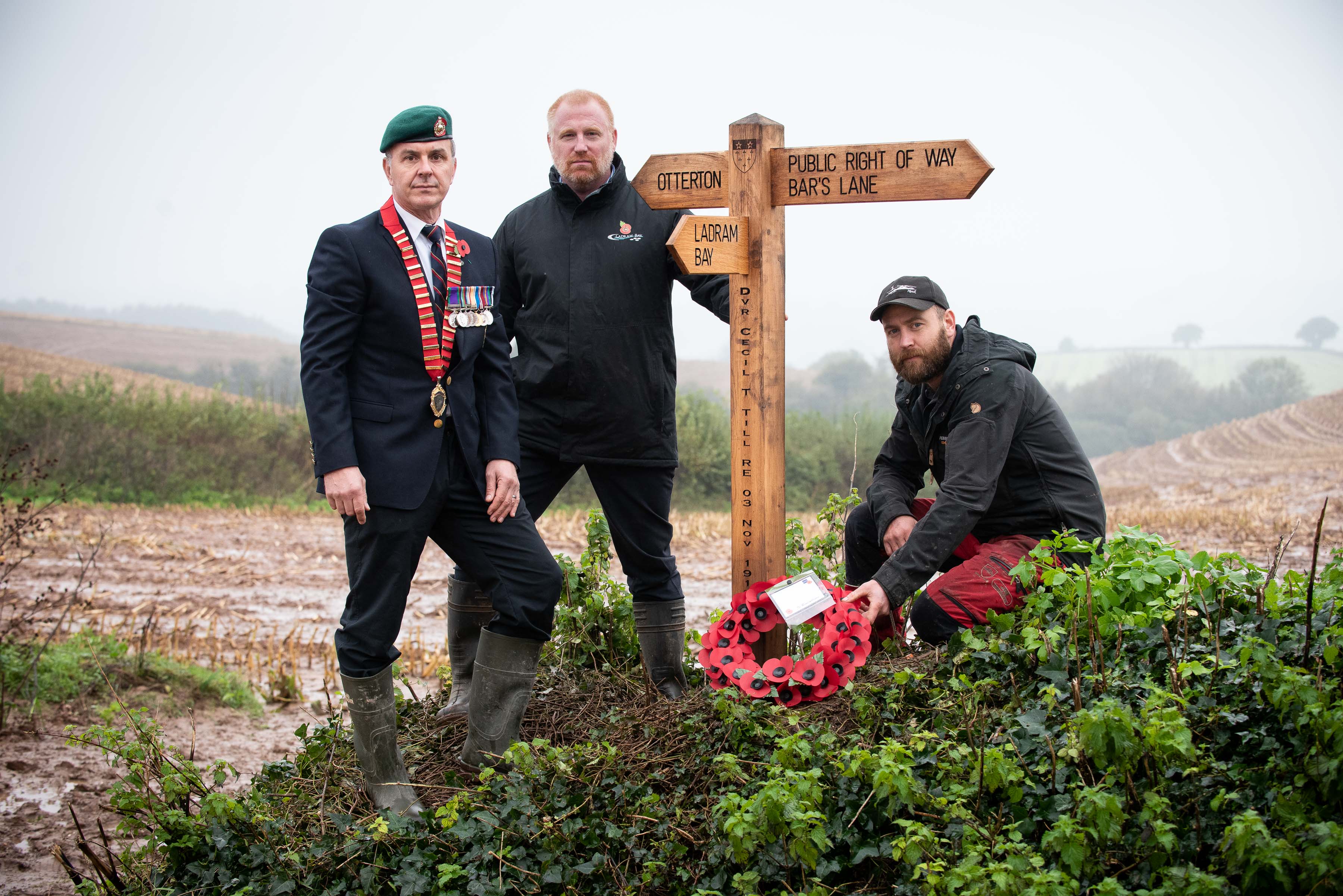 Clare James, from Clinton Devon Estates, said: “Hundreds of men and women from across the Estate communities gave their lives in the First World War and we are determined that they will be remembered.

“Tragically, although that conflict was thought of at the time as the war to end all wars, seven more names were added to Otterton’s memorial cross at the end of the Second World War.

“Supporting the parish council’s Remembrance waymarker initiative is another way to keep the memories of Otterton’s Great War heroes alive.”

More information can be found via the War Memorials Registerand Devon Remembers.