Friday, May 27
Trending
You are at:Home»News»Exmouth»Tower Street church poppy garland reaches Exmouth fire station as crews show they are ‘proud’ to remember the fallen

Garlands of handmade poppies on display outside Exmouth fire station were donated after firefighters had an idea to display an emblem on the front of the fire engines.

The knitted and crocheted poppies, on display at the entrance of the Liverton Business Park fire and ambulance station, were donated by Stacey Waterhouse – she launched the idea to decorate Tower Street Methodist Church with a curtain of the red flowers.

Firefighters said Stacey, 39, of Rosebery Road, Exmouth, offered some of the spare flower garlands after hearing Red Watch discuss displaying a poppy on the fire appliances.

Exmouth firefighters said they were ‘proud to show that we remember’.

Chris Gibbs, watch manager at Exmouth, said Stacey and her family went to see Red Watch at the fire station on Sunday morning.

“Stacey told us about the wonderful work she had been doing with other members of our fantastic community and offered a few spare poppy garlands.

“Within a couple of hours, Stacey and her family were back at the fire station with a box full.

“The crew thought they were absolutely amazing and were too good to be kept behind the appliance bay doors.

“Once a garland was displayed in the fire engine, the watch wanted to make sure the rest could be appreciated by more people.” 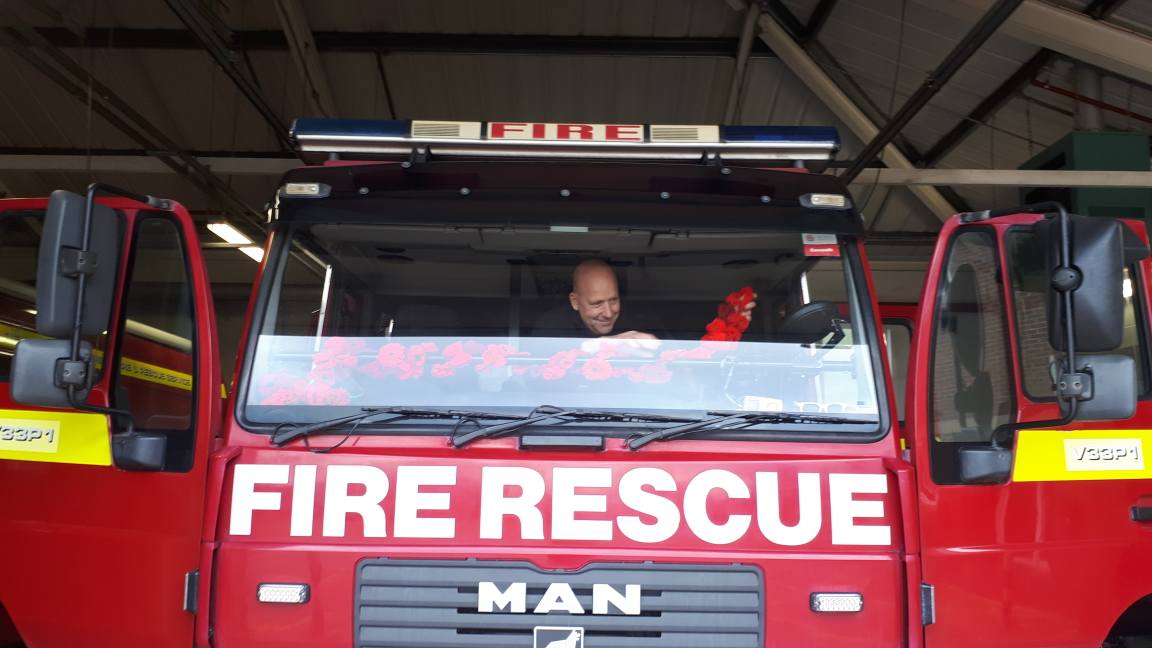 Firefighter Jameson arranges a poppy garland inside one of the Exmouth fire engines.
Photo: with permission.

More than 80,000 handmade poppies have been draped from the Tower Street Methodist Church.

The Poppy Ladies of Exmouth, led by Stacey, have spent untold hours crafting poppies and attaching the many thousands of flower donations received locally and from across the globe.

The official launch of the Tower Street Methodist Church poppies is today, Monday, November 4 at 1pm, where all are invited along.