The Union Jack flag is flying proudly on Budleigh Salterton seafront –  in time for Remembrance Sunday and Armistice Day –  after district council workers came to the town’s rescue.

StreetScene staff acted fast after concerns were raised that a broken pole could scupper the tradition –  part of community’s efforts to honour servicemen and women every November.

Sheared-off bolts meant that the structure could not be lowered to swap a St George flag for the UK’s ensign.

An East Devon District Council spokeswoman said this afternoon (Thursday): “We’re happy to say that our StreetScene team was able to drop the temporary pole and attach the Union Jack flag, which is now flying proudly on Budleigh seafront.

“However, a new flag pole has arrived and should be in place in time for Remembrance Sunday. The war memorial has also been repaired after being damaged by a vehicle.” 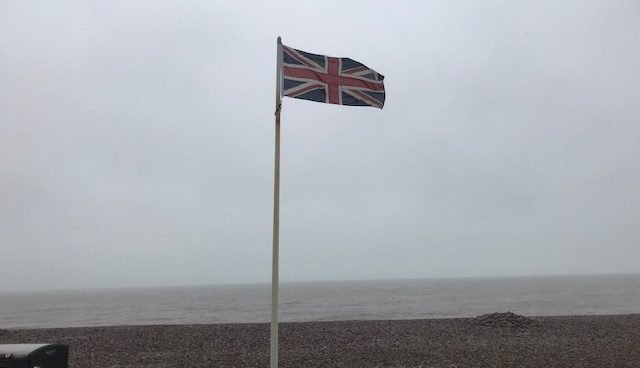 A meeting of Budleigh Salterton Town Council on Monday heard fears that the Union Jack flag could be absent from this year’s Armistice s because the broken pole could not be lowered.

An EDDC spokeswoman had said yesterday (Wednesday): “While the flagpole has been fixed temporarily, it is essentially out of commission which is very unfortunate.

“A new flagpole has been ordered but we do not have a confirmed delivery date.

“The council is exploring alternatives for a nearby flagpole to be used instead for the raising and lowering of the flag at the Armistice service.”

She said a temporary fix had allowed the town to display the flag of Saint George but if the flagpole was lowered to swap flags, it may not raise again.

Mrs Vanstone said: “Once they take it down, they may not be able to get it back up again.

“It’s bolted to the ground and it folds down. A couple of the bolts have sheared off so we are waiting for a replacement.”

Budleigh town council also said it hoped a damaged post on the town’s war memorial, at the junction of Coastguard Road and Marine Parade, could be repaired before Remembrance Sunday.

Budleigh’s youth club is given £5,000 council boost to help buy its building and secure its future