Tuesday, August 9
Trending
You are at:Home»News»Exeter»‘Mickey Mouse’ bid to build ‘mini-mansions’ on historic green space in Exeter is rejected

A bid to build ‘mini-mansions’ on the historic Mount Radford Lawn in St Leonard’s, Exeter, has been unanimously rejected.

Burrington Estates this week saw its proposals for seven executive family homes at the green plot panned as ‘Mickey Mouse’, ‘a grossly inefficient use of the land’, and had ‘no redeeming features at all’.

The site is currently owned by the Exeter Royal Academy for Deaf Education, which has decided to sell the site to help fund its relocation to Exmouth.

Exeter City Council planners rejected the blueprints after receiving some 225 objections to them.

The refusal has given hope to the St Leonard’s Neighbourhood Association and its alternative vision for the land.

This would see a completely inclusive play space dedicated to the wellbeing of the residents of St Leonard’s and wider Exeter created.

It would feature a low-impact community building to house changing rooms, ancillary facilities and a meeting/activity room.

The aim would be to see thousands of children and adults enjoying the benefits of outdoor exercise, sports, games, social functions, and a community space. 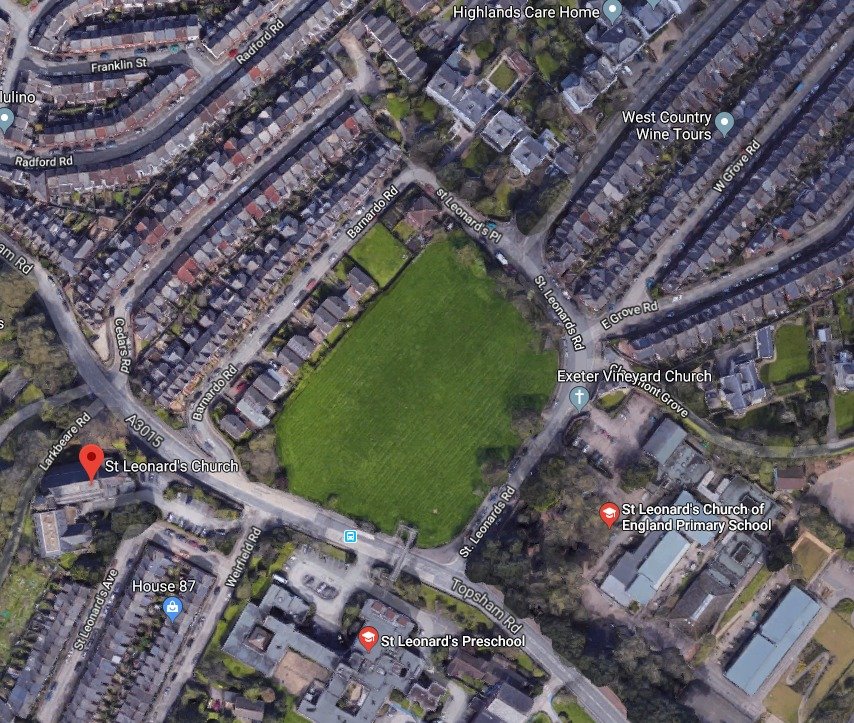 Speaking at Monday night’s meeting, Nigel FitzHugh, chairman of St Leonard’s Neighbourhood Association, said that, although the land has been owned by the school, it has also been used for community and sporting events.

He added: “We are concerned about the loss of the playing field as the demand for this type of playing field is likely to increase. We intend to set up a charity trust to purchase the field for the community.

“Community ownership would be a win-win as access to playing fields would be increased without the cost of the council running the facility.

“We hope to be finalising an offer this week for the site, but if the playing field is removed, it will lost for ever.”

Councillor Jemima Moore, who represents Newtown and St Leonard’s, said: “The strength of feeling is clear against this.

“They value Mount Radford Lawn and this green space that has been used by many generations of Exonians should be saved for years to come for the community.

“They want to build very expensive houses, but they would not benefit the community. Building mini-mansions instead of the affordable housing the city needs would be a grossly inefficient use of the land.” 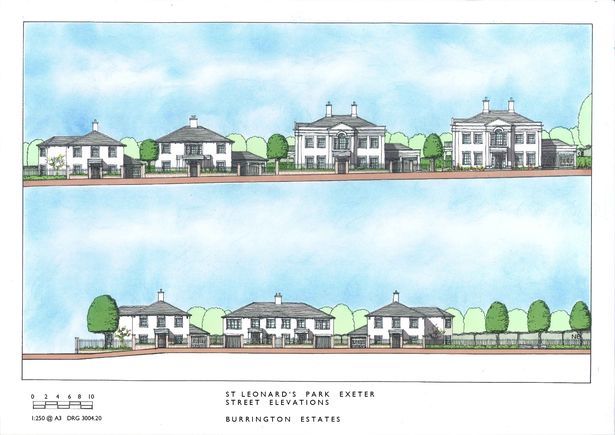 Councillor Matthew Vizard added: “The St Leonard’s Neighbourhood Association is not naïve about such an undertaking.

They know it would be a challenge but they should be allowed time to explore it and to raise money. I pledge
to work with them to pursue this.

I have forgotten the name of the developer, but I can only assume it is Disney – as it is such a Mickey Mouse scheme – Cllr Greg Sheldon

“Allowing the community to access a part of a housing development is not community space and isn’t remotely the same as a community playing field. People would feel awkward and reluctant to enter, feeling like they were trespassing.

“Mount Radford Lawn is not just some scrap of land. It is a cherished local amenity and it provides a green buffer between the local area and the congested artery that is Topsham Road.

“Consider its potential – the local community has, and they have made a compelling case.

“If this site is developed, this potential place for sport, community, health and wellbeing, this historic site, this lung in the city centre, will be lost for good.

“I played football on Saturday mornings on Mount Radford Lawn as a kid. I want other children to have that opportunity again and to preserve this space for generations to come.” 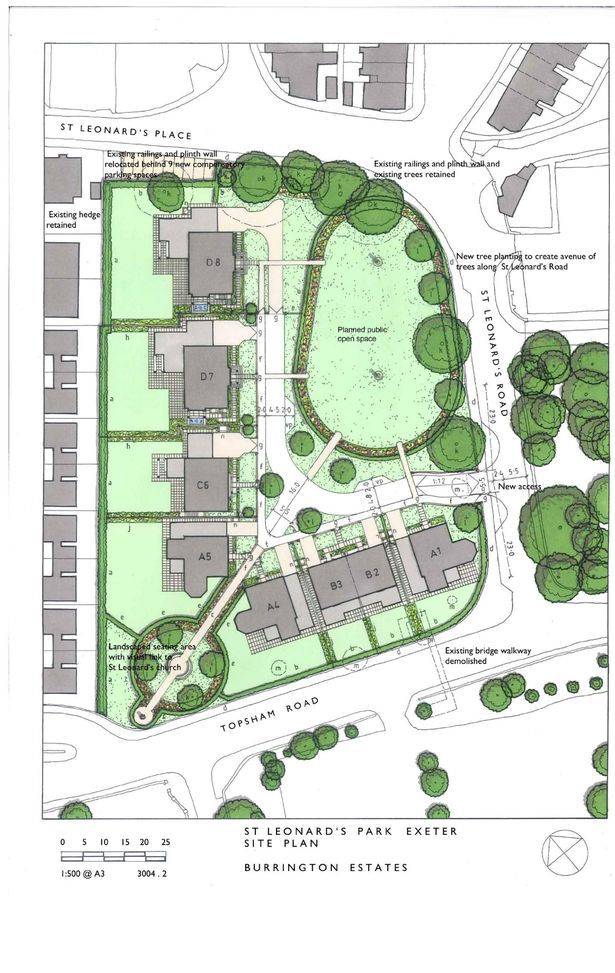 Cllr Emma Morse said: “I don’t think we should be developing the site at all and the officer’s report couldn’t be cleared about how wrong this is.

“I have sympathy for the deaf school and the need to raise funds, but it is not always right to do it and they have to look for a better option. I cannot see a redeeming feature of this at all.”

Cllr Greg Sheldon added: “I have forgotten the name of the developer, but I can only assume it is Disney – as it is such a Mickey Mouse scheme. It breaks so many rules, I cannot believe they have the brass neck to let it come to planning committee rather than pull it.”

Leader of the council, Cllr Phil Bialyk, added that he supported the green space being retained, adding: “We want developers to come to the city, but we won’t sacrifice important spaces for them that need to be retained for the community.”

The application also received 63 letters and emails of support, which said it was necessary for additional funding of the academy’s development at Exmouth for bespoke teaching, learning and residential spaces and modern resources.

It was also stated the academy cannot gift Mount Radford Lawn, as, under charity law, it is required to maximise the value of its assets. 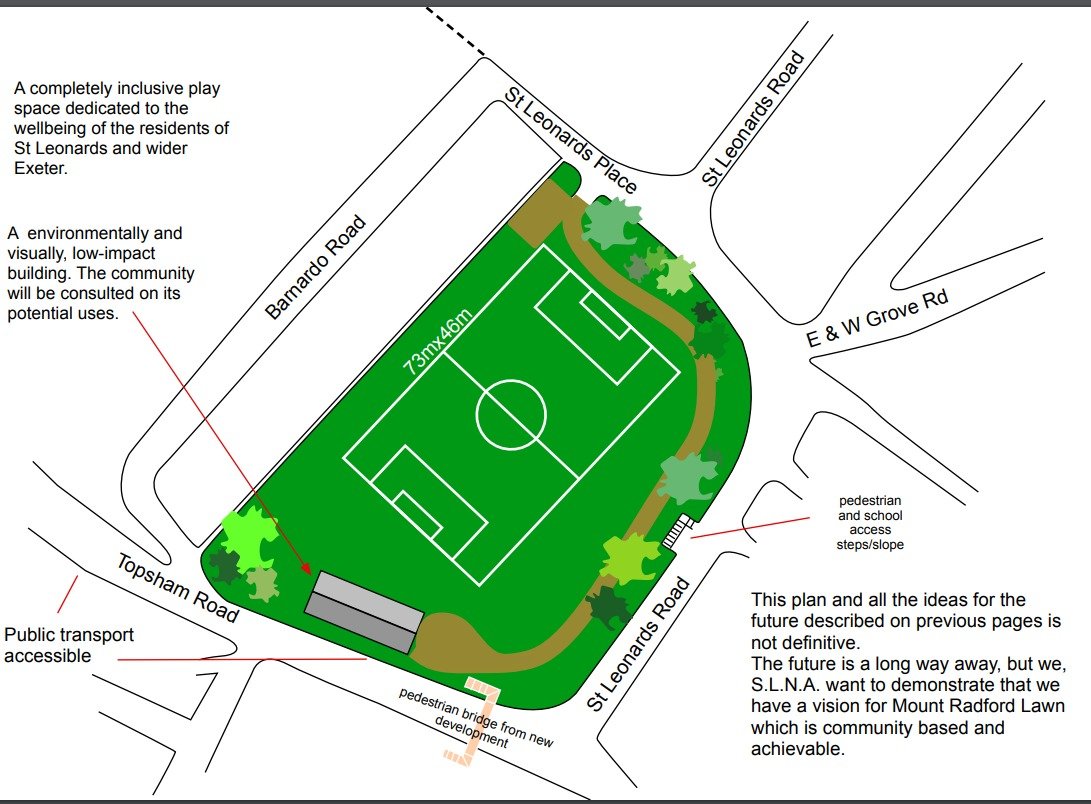 However, council officers recommended refusal, saying that the building of seven homes and a financial contribution towards affordable housing and playing pitches did not outweigh the harm the development would cause to heritage assets or the loss of playing fields/recreational space in the area.

It added: “In addition, this scheme would provide a poor residential layout in terms of the siting of the open spaces and insufficient information has been submitted to conclude that it is acceptable in highway terms.”

Councillors unanimously refused the application on the grounds it would cause harm to the heritage assets in the St Leonard’s Conservation Area.

They also ruled it would result in the loss of existing playing fields and areas of public open space would be inappropriately sited.

Members were unable to confirm that the scheme met necessary highway safety standards onto the existing highway network and said it would have an overbearing relationship to properties in Barnado Road.

Plans for £40million Exeter retail park, featuring M&S, Boots and McDonald’s, are back in business