Friday, July 10
Trending
You are at:Home»Editor's Choice»We are the champions! Exmouth in Bloom brings home Gold

Exmouth in Bloom this year went head-to-head against other South West in Bloom cup winners to bring home the Gold.

Exmouth’s previous wins – in 2018 the town scooped the Royal Horticultural Society Gold Award and brought home the St. Bridget Cup – meant the in-bloom team was elevated into a tougher champion of champions category for 2019 – but volunteers remained hopeful of a win.

Now, far from resting on their laurels, the volunteers are already thinking ahead to next year’s competition – they will compete on the national stage in Britain in Bloom.

You are never quite sure until it’s read out then you think ‘thank God for that’.

Gerry Bassett, Exmouth in Bloom chairman, said: “We are already planning for it. We have got lots of projects up our sleeves ready to go. There’s a lot of work that goes on behind the scene.

“We have already ordered the plants for next summer. We have to get the town looking absolutely top notch.

“Next year we will be in the national competition – all winners of winners, nationally.”

In Bloom judges reviewed the town’s floral displays in July and scrutinised the work Exmouth volunteers had carried out in the community, and environmentally.

Exmouth in Bloom was presented with Gold at a ceremony in Newquay, watched on by mayor, Cllr Steve Gazzard.

The volunteers knew they had put the work in to win gold, but stiff competition from other reigning champions had the team on tenterhooks until the results were announced.

“You are never quite sure until it’s read out then you think ‘thank God for that’,” said Gerry. “It was a tougher class we were entered into this year. We were up against all the cup winners, all at the top of their games.

“We were confident of winning gold – you just never know.

“The pressure was on.  This year we were in the class champions of champions because we won our class last year and we won the cup.

“We got put in the class with all the other cup winners, with all the top winners. There’s quite a bit of pressure in that.”

Winter planting comes next for Exmouth in Bloom.

Volunteers will rise early tomorrow (Friday) to meet the 6.45am delivery of bedding plants. 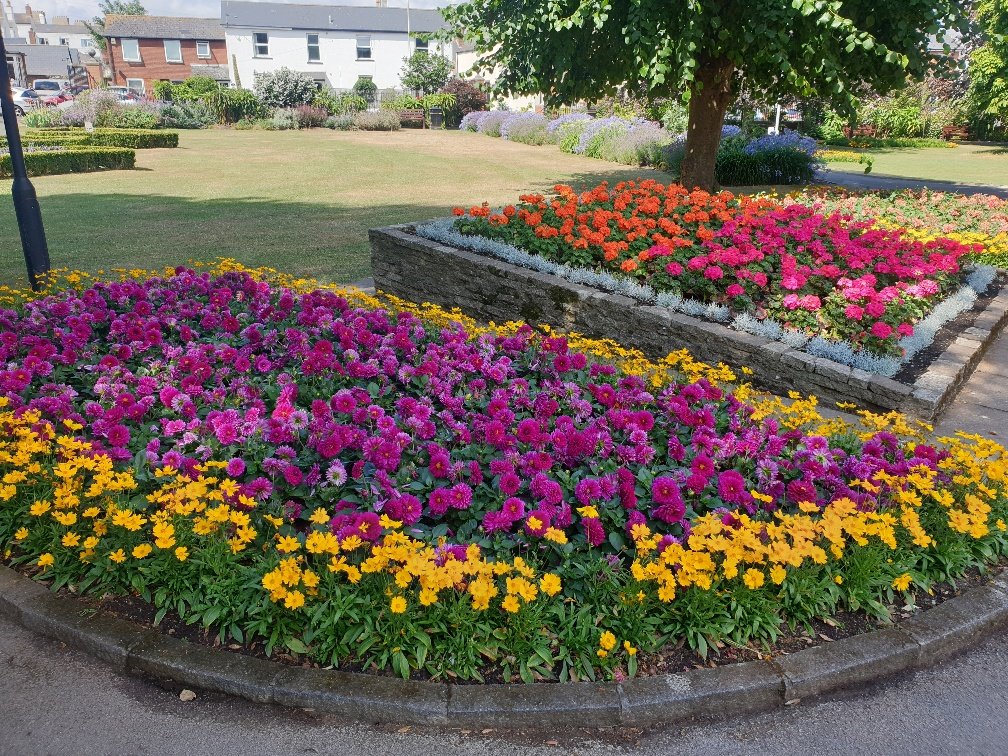 One of Exmouth in Bloom’s displays in Manor Gardens.
Photo: South West in Bloom.