Work has begun building a new concrete skate park in Seaton after the district council invested £200,000 of funding.

East Devon District Council (EDDC) hopes the skate park will be finished before Christmas, so an official opening, skate park jam and fun competition can be organised.

It is hoped the new-look, longer-lasting, sprayed concrete design will offer something for all ages and abilities after local skate park enthusiasts joined in discussions with the council and contractor during consultation meetings.

Seaton ward member Cllr Marcus Hartnell said: “Having secured the project funding back in 2018, I’m really excited to see work commencing on the new skate park and I’m extremely pleased to see that the users of the skate park have had such a lot of input into the new design. 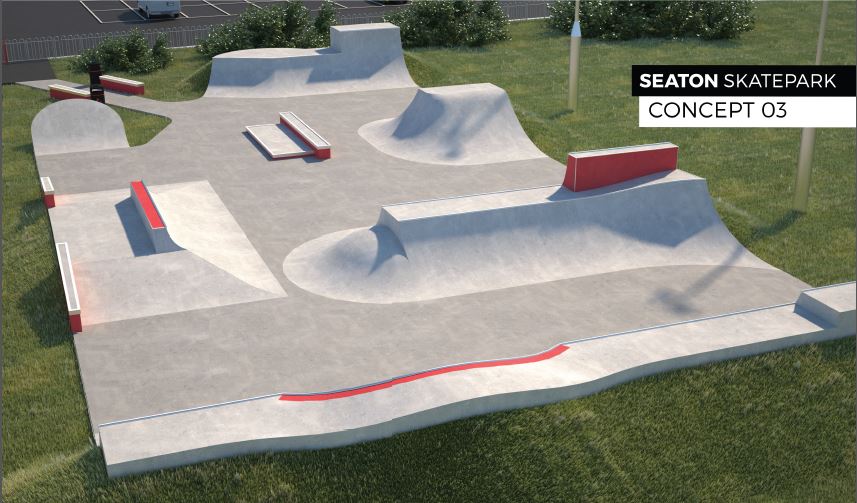 Maverick Skateparks has been working with skate park fans in Seaton to come up with this design,

“I’m sure they will not be disappointed with the end result.”

Ward member Cllr Jack Rowland said: “This is great news for the regular users of the current skate park and will, no doubt, attract new users to use an up-to-date exciting venue when completed.

“I recall, when Marcus Hartnell and myself were both Seaton town councillors, that a couple of years ago, we invited representatives from the regular users to meet us to hear first-hand their views about the existing skate park and what they’d ideally like to see, so to see work beginning on the new skate park that meets their aspirations is fantastic.”

The council, and specialist designer-contractor Maverick Skateparks, ‘worked hard’ to try and meet the many requests by Seaton skate park users, EDDC said.

Also featured is a mini ramp, which steps from four feet to five feet high and a street section of various ledges and a manual pad. 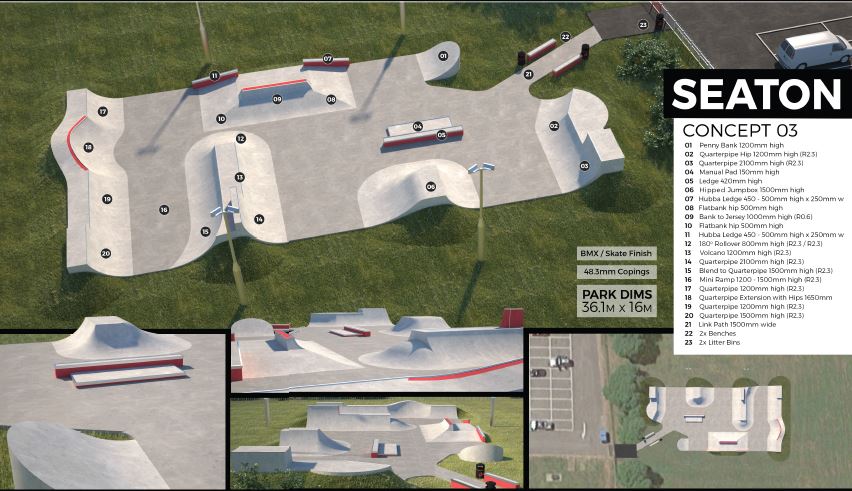 The skate park design and concept, by Maverick Skateparks.

EDDC said ‘a considerable amount of time’ was spent on the design to ensure that there was no requirement for ‘expensive and cumbersome’ handrails.

The council said the design minimises the fall heights on the back and sides of ramps, and gives the structure an ‘open and free flowing feel’ in comparison to other skate parks.

The skate park will be landscaped around its perimeter to ‘reduce its impact’ on the environment, EDDC said.

Ward member Cllr Dan Ledger said: “It’s fantastic to finally see the commencement of the long-awaited improvements and redesign to Seaton skate park.
“I’d really like to thank the community group who worked extensively with the main contractor, Mavericks Skateparks, feeding their thoughts into the design and aiding in the creation of a practical solution that will benefit all types of skate park users.

“Thanks also has to be given to Cllr Hartnell who has been focal to this project in securing the necessary funding for the town and the East Devon officers who have worked seamlessly with contractor and community throughout the process.

“This is the exact type of community youth service that Seaton needs and I hope it extremely well received.”

East Devon Chairman Cllr Stuart Hughes said: “I’m sure that the start of the construction for the new skate park is going to be well received by all the local skateboarding fraternity.

“As a recent addition to Olympic sports this facility once opened could well produce a future East Devon Olympian.”