Monday, May 25
Trending
You are at:Home»Features»An interview with… comedian Russell Kane

Russell Kane is more than just a stand-up. He’s like a comedy David Attenborough who, instead of the animal kingdom, focuses his attention on the way blokes from the south-east behave.

Raised in Essex, he was a bookish wallflower in a world of geezers. “I was a weedy boy at school and my dad was a rugby player” he says.

And he is poised to bring his award-winning brand to Exeter.

The star of TV shows like Stupid Man, Smart Phone and Live At The Electric dissects blokeish behaviour onstage, with always hilarious results.

“I find it easy to pick apart a certain kind of masculinity,” he says. “The way they talk, the way they behave in public, the ways they compete with each other and the ways they try to interact with women.”

Despite being a bit of an oddity growing up, there is a part of Kane’s psyche that is classic Essex. “Books are my thing,” he says, “but the second I saw Ibiza Rocks are having a comedian in residence this summer, I was like, ‘I’d love to get out there and have it in Ibiza.’ And my wife’s like, ‘What’s wrong with you?’” It’s all part of the Russell Kane contradiction. “I love curries, I love pints with the lads, I like BMWs – I’m a weird mess.”

That feeds into his fascination with class – not in a ranty political way, but on a more anthropological level. He’s a brilliant chronicler of how British people from different backgrounds look at each other. And he’s amazed by how little class is talked about as a subject, particularly by comedians.

Class explains the way some snootier people react to Kane – if he talked like Stephen Fry or Miles Jupp, he’d probably be taken a lot more seriously.

But the juxtaposition of big ideas and polysyllabic language with an estuary accent means he can sometimes get wrongly labeled as a show-off or a faker.

If a comedian with my type of accent dares to use a long word, it’s seen as display rather than intrinsic knowledge coming to the surface.”

So, Kane works hard to make sure he’s not being erudite for the sake of erudition. He says: “Thoughts deep, syntax clear, that’s the way I like to go. There are other comedians who tend to go syntax complex, thoughts shallow. And if you don’t speak posh or middle class, people will just go for you.”

Essex is as much a part of Kane’s comedy as Glasgow is for Kevin Bridges or Wales is for Rhod Gilbert. So it’s funny to hear that he’s now a fish out of water, living up north in leafy Cheshire. But rather than isolating him from his old stamping ground, it’s made him think about it all the more.

“It’s really brought into focus how weird, fast paced, angry and culturally unique the south east of England is,” he explains.

“Now that I’m up in Cheshire, I realise how fast paced and chaotic and anonymous we can be down south. I’ve been performing a bit about the difference between ordering a coffee in London or Essex, or ordering a coffee up north. In the north there’s someone asking about ‘Barbara’ and, ‘How are the grandkids?’, and down south you’re saying ‘Just throw an espresso in my face, now when’s my train? Move! Move! Move!'”

That’s part of the story behind Kane’s new show – though he’s keen to point out that the main focus of the evening will not be expounding some grand philosophical theory. 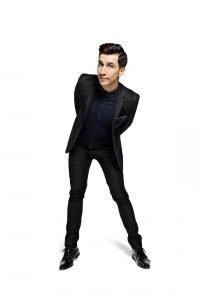 “I know I can do shows with a clever theme and all that,” he says, “but I just want to do a beltingly funny night in the theatre. So at 10.30, you can’t move for the pain of laughing. That’s my only objective.” However, he’s aware that he might frustrate his own aims. “Because of the way my brain works, my writer brain, it ends up being about fatherhood or this that or the other.”

One of the things Kane does want to talk about this time is the way humanity seems to be divided into two distinct groups – not rich and poor or men and women, but a distinction that is possibly even more fundamental.

“As far as I can tell there’s broadly two tribes that get things done in our western culture. Half of us have this sort of restless brain, always working.

“These are the people who pace up and down, who can’t bear being delayed, who are always either stressing out or chasing the next excitement.

“The second group is the ’Life’s too short, man, chill out. It’s a red bill, who cares, they’re not going to seize your house.’”

The type of people who, in Kane’s words, think ‘a traffic jam is an opportunity for a word game’.

According to him, these two groups aren’t adversaries.

“They’re the two tribes and they need each other. You tend to marry one of the opposite group. If you’re not sure which one you are, ask yourselves this – when you’re going on holiday, which of you goes on Trip Advisor, looks up all the hotels and restaurants and sucks the fun out of the trip before you go?”

There’s no doubting which camp Kane belongs to. He’s one of life’s natural Duracell bunnies, talking at incredible speed in a desperate (but perhaps always unsuccessful) attempt to keep up with the flow of his own ideas.

He says: “I called the show ‘The Fast And The Curious’ because that is how I have to live every single day of my life.”

“Nothing slows down, I bounce out of bed at a 100 miles an hour, before I even have a coffee.”

And that energy is channeled into constant mental activity.

Kane adds: “I analyse everything – it is exhausting being me some days. And it’s like that onstage – the tiniest crease in the curtain sends me off on some kind of journey.”

He’s aware of his own peculiarities enough to be able to joke about them.

“It’s the opposite of ADHD,” he laughs, “I’ve got ‘Overly Focused Attention Disorder’.”

It’s easy for experienced comedians to get blasé about the experience of going onstage, but Kane reckons he’s still got all his original love of stand-up.

When we spoke to him, he was preparing for a low-key tryout gig, but he was buzzing in anticipation like it was Live At The Apollo.

“I absolutely live for stand-up,” he says. “I love TV, but I’m so excited about going onstage in front of 40 people in Edinburgh, let alone when it gets to three thousand or whatever on tour.”

He doesn’t feel he’s changed his mental outlook since he first started gigging – in part because he came to stand-up late.

“If you’re past that twenty fifth birthday when you try stand up, you know yourself. I was just a fizzing volcano of ideas that wanted to talk about life, love and family. And that could still be the blurb for this year’s show.” The intimacy of stand-up, and the way it’s so easy to share your personal experiences, is clearly something that continues to appeal to him.

“I’ll go out with my mum and my wife, say there’ll be some incident and we’re forced to leave a bar – that to me is the funniest thing to talk about onstage. And that would have been the same ten years ago. I’d have run onstage and said, ‘You’re not going to believe what happened last night.’”

Success is one of those things that can have a warping effect on a comedian’s sensibilities – when everyone wants to be your friend or sleep with you, it can make you lose track of who you really are.

When Kane won the Edinburgh Comedy Award in 2011 for his show Smokescreens And Castles, it marked a major breakthrough after years of intensive gigging, but it brought with its own pressures.

He says: “I went through this phase in the middle when there was a bit too much attention – and all the hair on my body went up almost like some bizarre wildlife crest. That was in relation to female attention.”

These days, he’s settled with a wife and family, and he reckons that he’s taking a more serious attitude to his work. “I changed management. I grew up my look, and I stopped doing slightly immature things.” How do you mean? “My attitude used to be – if there was a TV show called Celebrity Surfboard Topless Challenge and they wanted to book me, I’d be like, ‘That sounds hilarious, I’m doing that.’” He’s now much more discerning about how he presents himself on screen, and to the public in general. “I’ve been really strict about making sure my hair’s combed, and I’m in a grown up suit. It’s as basic as that.”

Perhaps as a result, his audience is broader than it’s ever been – from young to old.

Right now he’s working on a new book – an unorthodox spin on the traditional comedy autobiography.

“I can’t bear rags to riches comedians memoirs,” he says. “There’s been too many of them, it’s like having too much of one type of food. So I thought, no one’s ever done a biography of someone else, as a sideways way of telling their own story.”

The resulting book is the story of Kane’s own dad, and he hopes it’ll be out in time for Father’s Day.

He’s also been busy with ITV’s The Stand Up Show, a new format that dramatizes club routines with actors. “There isn’t that much stand up on TV, not really, and this is exciting because it’s doing something different with the artform,” he said.

And he continues with a wide variety of online projects – not just his acclaimed podcasts, Evil Genius (currently the best performing BBC Sounds original commissioned podcast) and Boys Don’t Cry on JOE.co.uk, but also his Kaneings videos.

These give him license to respond at speed to breaking news events and express a raw form of his comedic voice, unfiltered by the lengthy process of creating a consistent live show. Kane was inspired by a young YouTuber he met to be less protective of his material, and more free in how he expresses himself.