Wednesday, June 29
Trending
You are at:Home»News»Exeter»New park and ride site for Exeter revealed

Proposals for a new park-and-ride site to serve Exeter have been revealed.

Devon County Council’s cabinet is next week being recommended to back the idea of a new park-and-ride being built just off the A379 and A38 at the Peamore Industrial Estate.

The council has been awarded £55.1m as part of a successful Housing Infrastructure Fund bid for the South West Exeter area, and as part of it, is proposed to deliver a roundabout to access the industrial estate, as well as an upgrade to the electricity infrastructure to support the employment development.

But the report to the cabinet of Dave Black, Head of Planning, Transportation and Environment, says that while the County Council are unable to recover the cost of the infrastructure, an option instead is of a monetary repayment is to secure land of an equivalent value in lieu.

He added: “In relation to this site, it is proposed to secure land for the purpose of delivering a park and ride site. It is proposed to undertake stakeholder consultation and, depending on the outcome, submit a planning application for this site, based on the preferred option, which is considered necessary in advance of securing the land.”

Diagrams with the report show that the park-and-ride site would occupy land between the A379 and the A38, and access would be via a new roundabout that is set to be created on the A379. 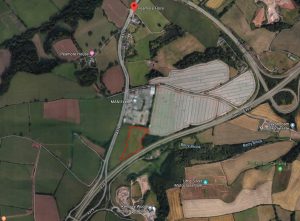 The site is next to land that Teignbridge District Council controversially gave permission for a major commercial extension, after returning to planners.

Devon County Council has ambitions to create new park-and-ride sites on all the main corridors into the city and double the number of spaces, but previous plans have faced difficulties after the scheme to use the Roundfield site in Ide was scrapped and no suitable sites on the North West side of Exeter were found.

The cabinet are also recommended to award the contracts for the construction of two additional new junctions on the A379 within a budget threshold of £4.5m.

The Eastern Junction is a new access junction to a development parcel between the Devon Hotel and Matford roundabouts and would enable two parcels of land to be developed. The report says that the delivery of the junction by Devon County Council will ensure that the junction is able to unlock both landownerships.

A second junction, which will have sufficient capacity for both the proposed new free school and an early phase of development, is also planned. The signalised junction would then be upgraded at a later date in combination with other works to the A379.

A planning application for the new 630 place primary school and 750 place secondary school for the site has been submitted and is awaiting determination by the county council.

Linked to the delivery of the proposed all-through school is the delivery of a pedestrian and cycle bridge across the A379, and the county council is currently working with developers to confirm final levels for the bridge to allow detailed design to be progressed, but the design and cost remain appropriate compared to the funding received from the Housing Infrastructure Fund.

Recommending that the cabinet award contracts to deliver the junctions and undertake consultation towards submitting a planning application for the park-and-ride, Mr Black said: “The aim of the Housing Infrastructure Fund in relation to South West Exeter is to unlock development through the upfront, coordinated delivery of infrastructure.

Other infrastructure set to be developed at a later date as part of the HIF bid includes the realignment of Chudleigh Road, Alphington Village enhancements, a new country park, and further junctions on the A379.