Tuesday, August 9
Trending
You are at:Home»News»Honiton»Honiton Gate to Plate attracts thousands and is hailed a resounding success

After being postponed due to severe weather in the summer, there was no stopping Honiton Gate to Plate. The fine food, drink and craft event finally took place last Saturday – and attracted thousands of visitors.

From traditional fare to the most creative, there was something for everyone to taste and buy as around 50 producers were joined by top chefs, food experts and talented entertainers.

Big crowds flocked to the event in the town’s High Street to sample locally made delicacies. Local chefs and food experts took to the stage and demonstrated delicious dishes while talented entertainers performed on a second stage.

The event, organised by East Devon District Council and supported by Honiton Town Council, was a huge success. 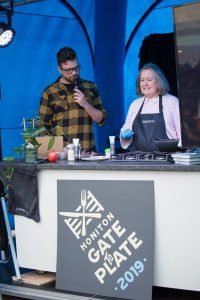 Those taking part told EastDevonNews.co.uk that they ‘didn’t stop all day’, interest was so huge.

Elsewhere, local councillors and community organisations have praised the event for ‘bringing everyone together’.

Councillor Ben Ingham, Leader of the district council said: “I talked to many visitors and they really liked Gate to Plate. I listened to the producers and they were really happy.

“Next year I think we might try this out in other East Devon towns as well. Devon food and drink is so hard to beat. We all need to try it and buy it.”