The scheme, revealed this week, would see part of the existing wall around the holy landmark demolished to enable safer and convenient access.

The additional opening will only be required while contractors rebuilding of The Royal Clarence Hotel are occupying part of the cathedral’s existing dedicated access, plans submitted to Exeter City Council state.

Chris Sampson, clerk of works at Exeter Cathedral, says in the application: “The objective of creating a temporary access was welcomed and the reaction to the initial proposal was very positive by those operating businesses in the area as the current restrictions causes access and health and safety issues.

“Forming this temporary access point would aid the flow of people to and from the Cathedral Green in a safer manner and improve access for all.

“There have been several accidents reported from members of the public climbing over the wall following a ‘desire path’ rather than using the congested unnatural access routes and there could be an issue of safe egress from the cathedral in the event of an emergency evacuation in the current arrangement.

“The scheme proposed is only a temporary one until the rebuilding is complete. The wall will be rebuilt to the exact same dimensions and design with all the original materials which will be protected and stored for reuse.” 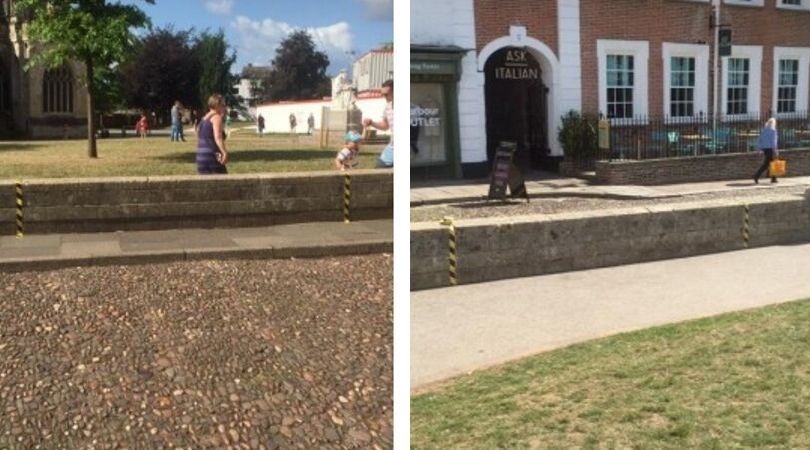 The section of wall which will make way for a new pedestrian access to Cathedral Green in Exeter.

While the construction of Exeter Cathedral began in 1114, the existing wall does not have any architectural merit and was constructed in the early 1970s using reclaimed stone.

The section of wall proposed to be demolished is 3.85m in length, 0.6m high and is opposite the Ask Italian restaurant.

Mr Sampson added: “The proposed development is totally in keeping with the cathedral and Cathedral Close.

“The opening will only exist for the duration of the rebuilding project. Once completed it will be restored to its original design and appearance. Its prime purpose is to ensure the safety and convenient of the many visitors to Exeter, the cathedral and the Cathedral Green.”

Exeter City Council planners will determine the fate of the application at a later date.

The Royal Clarence Hotel was devastated by a major fire in October 2016 and plans to rebuild it have been approved.

But owners Andrew Brownsword Hotels have put the hotel up for sale, saying that they could not afford to rebuild the hotel and selling was ‘the only way to make the rebuild happen quickly and viably’.

It places the future of the hotel in doubt, with the statement from Andrew Brownsword saying that seeking new owners for the site is the only way that the rebuild can progress.