Thursday, June 4
Trending
You are at:Home»Editor's Choice»Garage owner’s shock £255,000 electricity bill would ‘supply the whole of Exmouth for a month’

An Exmouth one-man garage owner has been landed with an electricity bill for a quarter of a million pounds by EDF Energy.

Graham Hill, 44, of Exmouth Auto Servicing, in Victoria Way, expected a letter from the electricity giant telling him his business account had been cleared.

When Graham opened the letter today, Thursday, he saw EDF Energy had charged him £255,196 for the period of August 6 until September 16.

The letter states he has until the end of the month to pay.

I am quite easy going. They can chase me for a quarter-of-a-million bill for as long as they like, for the rest of my life probably…

Graham said the amount charged by EDF Energy could pay for the entire town’s monthly bill.

Graham’s garage was visited by an EDF Energy meter reader on Monday, who told him to expect a letter saying his balance was clear.

He said: “I am expecting them to ring me. You would expect them to notice if someone had a big spike in their electricity, that something was wrong.

“There’s only me on my own working here. It’s not a massive company. It’s a one-man garage.

“It would probably supply the whole of Exmouth for one month.

“They can’t rattle me easily. They are not going to get a quarter-of-a-million out of me.

“But if it was a vulnerable person who got the bill that was at the end of their tether, it could be the straw that broke the camel’s back. It could be a stress too far.

“I am quite easy going. They can chase me for a quarter-of-a-million bill for as long as they like, for the rest of my life probably.

“But if you were at the end of your tether, it could make you jump off the cliff, if you saw that.”

Graham’s monthly electricity bill for the garage is usually £35. 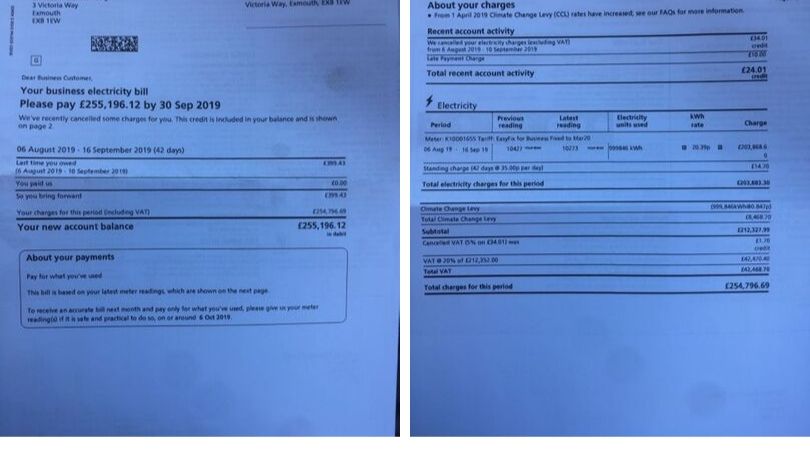 An Exmouth one-man garage owner has been landed with an electricity bill for a quarter of a million pounds by EDF Energy.

He said: “On Monday a chap from EDF came to the workshop and introduced himself.

“He said ‘your new bill will be sent over the next few days confirming the account is clear’.

“Surprisingly when the bill turned up, I didn’t expect it to say you owe us a quarter of a million pounds.”

Graham said he knows the bill was sent in error, but it took him a while to realise the mistake.

“I got it checked by several other people – they said ‘you are in trouble!’”

An EDF Energy spokesperson said this afternoon: “We are deeply sorry for the obvious distress this will have caused and it shouldn’t have happened.

“As our customers would expect, we have tight controls to ensure that the bills we send are accurate.

“We have launched an investigation into how this happened and of course have corrected the bill for the customer and apologised.”

Exmouth 2019 illuminated carnival WILL go ahead