Exmouth’s firefighters and members of the public stood shoulder-to-shoulder in silent tribute for the 2,977 souls who lost their lives in 2001 when the towers collapsed.

The remembrance service was led by the Chaplain for Devon and Somerset Fire and Rescue Service, Julie Andrews, with musical laments played by Exmouth pipers and fire service buglers.

Prayers were said for the victims and their families, and a minute’s silence held to remember those killed.

The address was given by station manager Nathan Lapwood and followed by the Last Post by Devon and Somerset Fire and Rescue Service buglars.

Among those to lay wreaths was Charlotte Tuckett. Her cousin, Steven Lawn died in the South Tower. The Exmouth memorial has a piece of steel from the south tower.

Charlotte said: “It’s amazing that people still want to pay their respects. It means a lot to us.”

Dave Morley, Exmouth firefighter, who organised this year’s Phear Park service, said: “Unfortunately Lionel Howell could not be here this year but we managed to organise it and it went well.

“It was nice to see Steven Lawn’s family. They are really grateful to Exmouth for holding the ceremony every year. To our knowledge there’s no where else does this memorial or holds a service in Devon.”

The Phear Park 9/11 memorial stone was made possible when the town’s now-retired charity champion, Lionel Howell, campaigned for a piece of metal girder from the South Tower to be brought to Exmouth and set in resin and granite as a permanent tribute.

When the blackened piece of steel arrived in Exmouth it had a ‘vivid’ smell of smoke.

It was embedded in clear resin and held in granite, surrounded by the badges and emblems of the emergency services here and in New York.

In 2007, Exmouth’s 9/11 service include the rededication of the park’s memorial when it was returned to Phear Park after repairs were made to the resin and a medic badge was added to the emblems.

The World Trade Centre was built in 1970 and housed 430 companies. The average number of people working in the building on any one day was 50,000.

More facts about the terror attacks on 9/11 were available to those who attended the service. 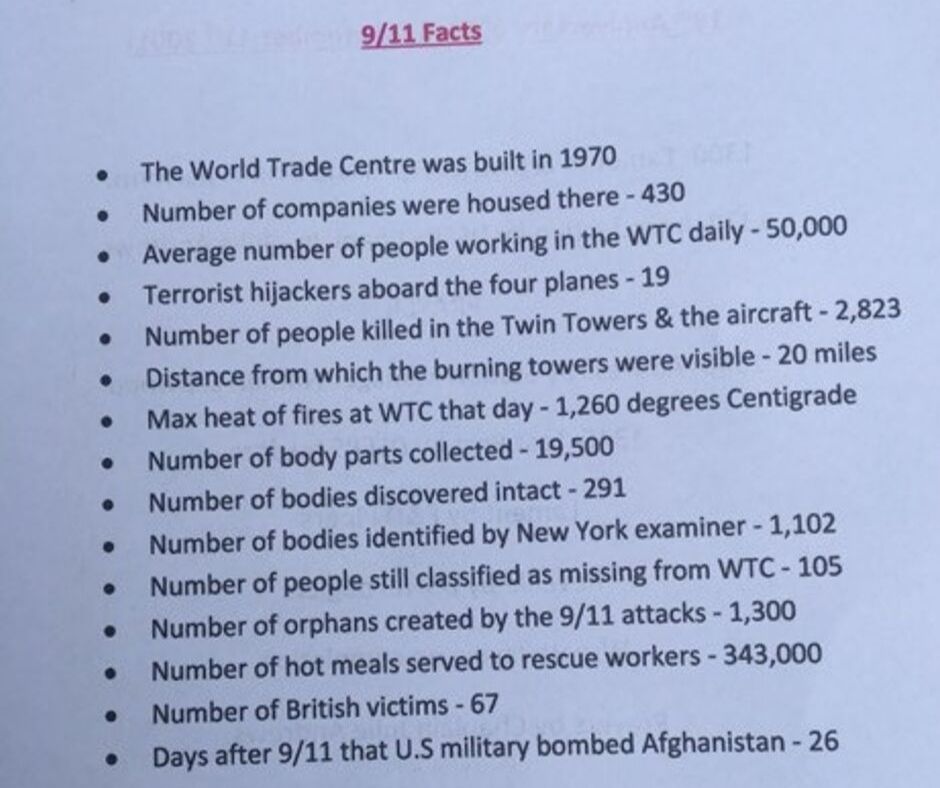 Warning after dog falls 60ft down cliff at Salcombe Hill