“We need to be doing something to make the public aware that this is actually a load of baloney.”

Budleigh Salterton Town Council this week told Devon and Somerset Fire and Rescue Service to cancel its cost cutting consultation until it has ironed out inconsistencies in its ‘flawed’ information and over-complicated public document.

Members from Budleigh this week met with councillors from the neighbouring villages to stop the closure of Budleigh’s fire station, saying ‘God help us’ if cover is cut.

Councillors hit out at ‘inadequate’ information fed to the public by Devon and Somerset Fire and Rescue Service (DSFRS) through its consultation document.

They don’t know the document has the wrong statistics in there. We need to be doing something to make the public aware that this is actually a load of baloney…

Now councillors from Budleigh, Bicton, East Budleigh, Otterton and Colaton Raleigh want the public to take a stand against the fire cuts proposed for East Devon.

Valerie Lister, chair of East Budleigh with Bicton Parish Council, said: “We need to get the public on side. The public do not understand what this is all about.

“They don’t know the document has the wrong statistics in there. We need to be doing something to make the public aware that this is actually a load of baloney.”

DSFRS is canvasing Devon and Somerset residents until September 22, 2019, about a range of options to save the service money, including station closures, slashing crewing hours and removing fire engines.

Cllr Penny Lewis, Budleigh town councillor, said: “They (DSFRS) are seeing things in isolation. They are not saying ‘well if Budleigh goes, if Topsham goes and there’s a fire at Colaton Raleigh what would happen, who would actually go out?’. Or if we needed a lot more fire engines in one place; they weren’t evidencing that.

“We should be commenting on Topsham as well. It will have a knock-on effect to us.

“Sidmouth in particular and certainly Exmouth will. We should be looking to beef up Exmouth.

She added: “There’s a danger that it’s ‘we must keep our fire service here’. That may not be the answer that we come up with but we do want to make sure our cover is adequate.

“The proposals at the moment are not adequate and we have a better service from our fire station now.

“So why would we lose what we have got now when nothing better is coming?”

They are seeing things in isolation. They are not saying ‘well if Budleigh goes if Topsham goes and there’s a fire at Colaton Raleigh what would happen, who would actually go out?’.

Caz Sismore-Hunt, Budleigh mayor, said: “They are all working together at the moment, Exmouth, Topsham and Budleigh.

“Exmouth, at the end of the day, are the bigger station. If Budleigh went tomorrow, Exmouth could go out.

“But if Budleigh went tomorrow and there was no night cover in Exmouth and Topsham’s gone and Middlemoor’s over at Cranbrook, and Sidmouth’s on retained and they have all gone out for the night, we’re stuffed.”

She added: “Who looks after Cranbrook?  Cranbrook haven’t got a fire station. They (DSFRS) say Middlemoor.

They say Middlemoor covers the motorway and then they are going to cover Cranbrook.

“How many pumps have they got at Middlemoor? It’s all I ever hear.”

Budleigh councillors raised a raft of concerns with the fire service, claiming the consultation process has excluded the elderly, employed, disabled and non-English speaking residents.

Cllr Peter Duke said: “It’s a great pity they have told us the Safer Together documents are no longer available in a hard copy and only digital online versions are available.

“That’s very remiss. A lot of people don’t have digital access, particularly our aged and aging population which is another aspect of this consultation which wasn’t taken into consideration; the vulnerability of people in this area.”

He added: “This is a very glossy document designed to impress people superficially but even so, one of the statistics is how fire-related casualties have increased by 11 per cent over the last five years.

“That’s serious enough in their terms, and our terms, to be worried about the implications for Budleigh.

“And God help us if the Salterton Road’s up. Who’s going to get through here other than our own fire engine. Nobody. They would have to come from Sidmouth.”

In a letter to DSFRS, Budleigh town council said the consultation process was flawed because:

Arguing the case for Budleigh’s fire station to remain open, councillors said details of cuts and closures were scant, there was no evidence of how areas in East Devon would be covered by remaining stations, or data to support how savings made would be reinvested in the service.

Councillors said DSFRS was unclear on how areas such as Woodbury Common would be protected in the event of a large-scale fire, comparing it to the 2016 Royal Clarence Hotel fire, classed by DSFRS as one incident, although it was tackled by 16 fire engines and crews from across two counties.

You have until Sunday, September 22 to make your views known about the DSFRS proposals.

Click here to read the DSFRS consultation document and see here for the questionnaire. 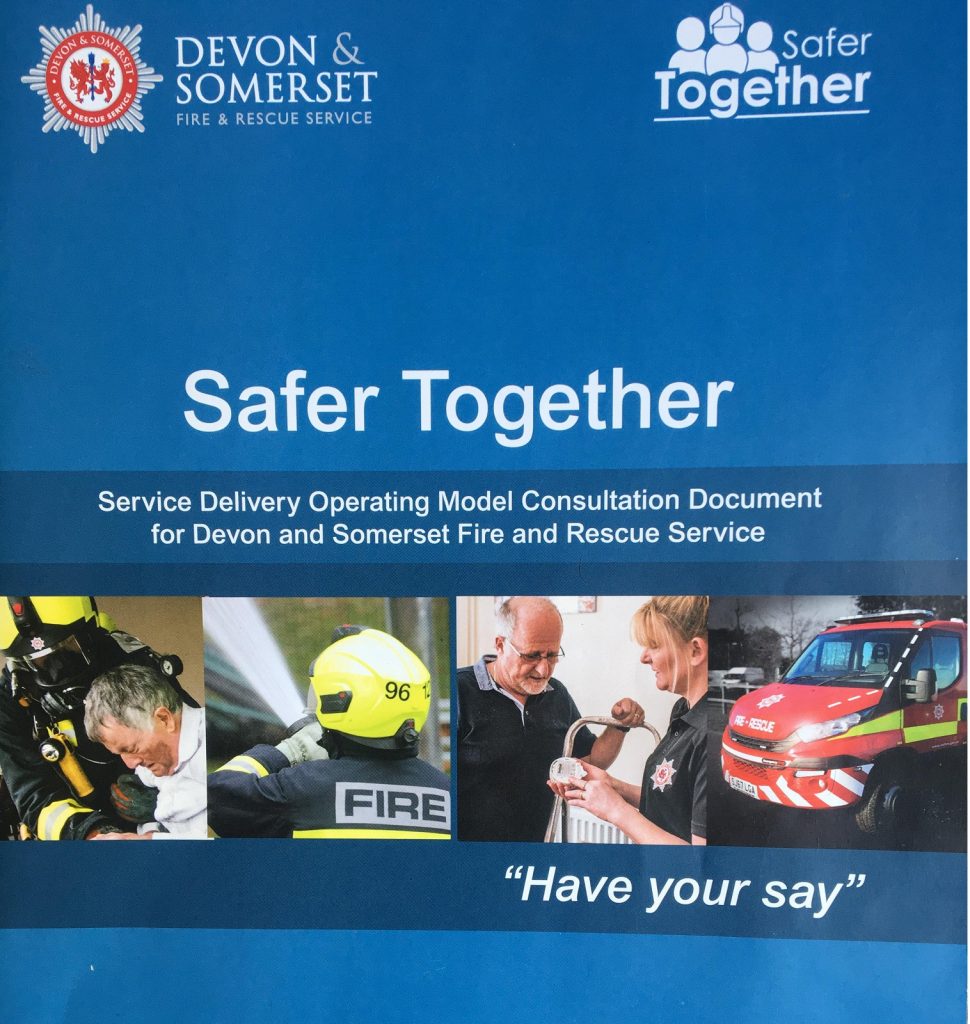 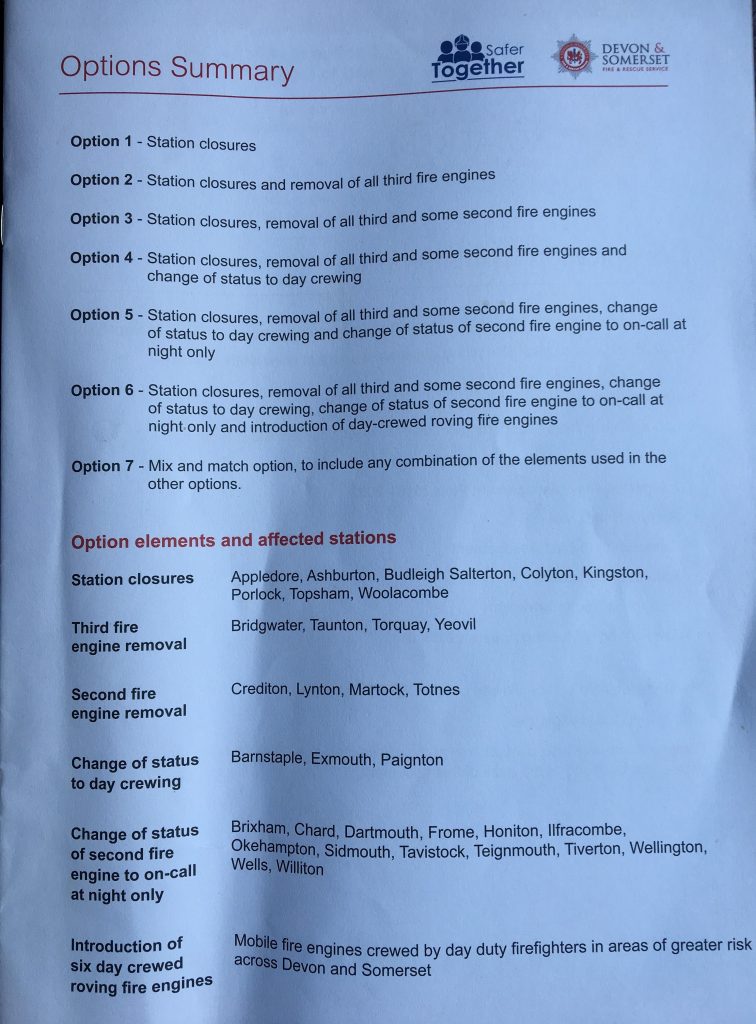 Devon and Somerset Fire and Rescue Service (DSFRS) is canvasing Devon and Somerset residents until September 22, 2019, about a range of options in East Devon to save the service money, including station closures, slashing crewing hours and ‘switching off’ fire engines.