Saturday, June 25
Trending
You are at:Home»News»Campaign»CAMPAIGN: Show your support for Exmouth firefighters and speak up to Save Our Service

Your help is needed in the battle to save Exmouth’s full-time fire cover by backing our town’s firefighters who plan to be in The Strand on Thursday (September 5).

Off-duty firefighters will be speaking to the public explaining Devon and Somerset Fire and Rescue Service’s cost-cutting consultation, Safer Together.

Devon and Somerset Fire and Rescue Service (DSFRS) is canvasing residents across both counties until September 22, 2019, about a range of options to save the service money, including station closures, slashing crewing hours and ‘switching off’ fire engines.

Firefighters have been out in force across East Devon explaining how our homes and safety will be compromised by the cuts and closures.

Exmouth firefighters set out their stall in the Magnolia Centre on Friday, gathering support for the Liverton Business Park fire station to remain manned around the clock.

Chris Gibbs, watch manager at Exmouth, said firefighters were returning to the town centre again on Thursday, September 5, to highlight the public consultation and questionnaire ahead of the September 22 deadline.

He said: “Exmouth firefighters have been in town explaining the public consultation to members of the public.
“It was such a success that they handed out all of the questionnaires allocated to Exmouth station.
“We’re looking to get more as people are so very keen to express their opinions.”

If Budleigh and Topsham fire stations close, the next available fire engines will have to respond from Middlemoor, Exeter, Honiton, Sidmouth, Seaton or Ottery St Mary.

Because Exmouth’s fire station is manned around the clock, crews now can be on their way to an emergency within one minute; if night cover becomes on-call, expect to add a five-minute wait time before the crew arrives at the station and the fire engine leaves.

Closing Colyton station and ‘switching off’ the second fire engine during the day at Sidmouth and Honiton means no immediate back-up until crews arrive from Seaton or Ottery St Mary.

The decision on DSFRS’s proposed plans will be made by the Fire Authority in November and any agreed changes will start in 2020. 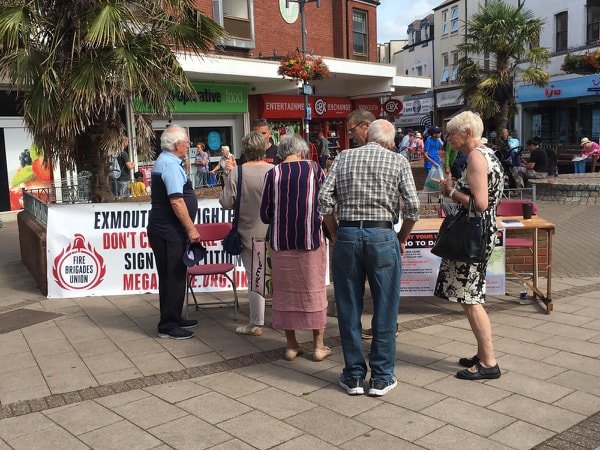 Exmouth firefighters set out their stall in the Magnolia Centre , gathering support for the Liverton Business Park fire station to remain manned around the clock.