Tuesday, June 28
Trending
You are at:Home»News»Sidmouth»All set for Sidmouth Air Display 2019: guide to this evening’s extravaganza on The Esplanade

Thousands of people are set to flock to Sidmouth seafront for the town’s biggest-ever air display this evening (Friday, August 23).

The bank holiday and regatta weekend will get off to a flyer when the extravaganza begins at 6pm – with five different teams performing.

The RAF Falcons Parachute Display Team, Battle of Britain Memorial Flight Spitfire, Strikemaster Jets Pair and RAF Chinook will all be taking part, along with the Twirlybatics Team in their popular Pitts Special biplane.

Visitors and residents are being asked to give generously so that the Red Arrows can return to Sidmouth in 2020. 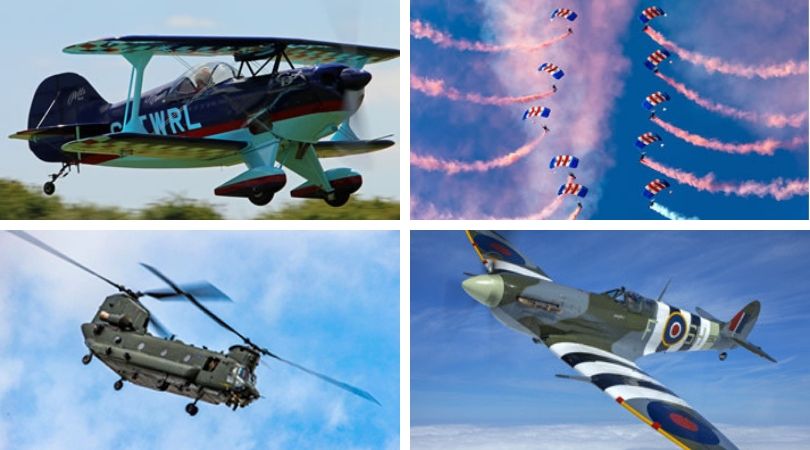 Sidmouth Air Display 2019: some of the performers. Pictures courtesy of Sidmouth Town Council

Organisers say aircraft attendance and timings are subject to weather and other factors beyond their control.

See www.visitsidmouth.gov.uk and the Visit Sidmouth Facebook page for up-to-the-minute details, timings and other announcements on the event.

The occasion will see a 95-year-old veteran – who flew 36 missions in World War Two – given a special salute.

Sidmouth resident Alexander Fraser will be honoured by the RAF Falcons display team following their display.

The ten-man team will drop from as high as 12,000 feet from a Dornier aircraft – performing a host of manoeuvres on the way down.

Former Royal Air Force Warrant Officer Mr Fraser will be seated in front of the Falcons’ drop zone near The Bedford Hotel.

He carried out 36 operations over Germany; the average for bomber crews was five missions.

Sidmouth Air Display is set to lead the way nationally by striving to be ‘carbon positive’.

Organiser Sidmouth Town Council announced this week it is working to offset the carbon footprint from the event.

The authority has agreed to work with Sidmouth Arboretum to plant 200 trees locally. In addition, it will be offsetting carbon footprint of the aerobatics display more than four times over by planting trees throughout the South West.

Town clerk Christopher Holland said the air show will be one of the first in the country to be ‘carbon positive’, adding: “With a fine forecast, fine beaches and a viewing area second-to-none, large crowds are expected to enjoy the biggest air display ever seen in the town.”

Council chairman Ian Barlow added: “We are all more aware of the need to protect the environment and we also know that people want a thriving tourist economy with events such as this, but the two don’t have to work against one another.

“By planting trees and working with Carbon Footprint Ltd we can do more than just offset, we can positively contribute back, and this year is just the start of this.

“Our tourism and economy committee are working together with our environment committee to get things like this done.”

Sidmouth Town Council has announced a raft of parking restrictions for this evening – as well as a water safety zone.

There will be no stopping between Exeter Cross through Temple Street, along All Saints Road and up Station Road until Icehouse Lane. There will be no parking allowed on the roads between 2pm and 9pm.

The restrictions also apply along Manor Road, near the junction with Peak Hill Road, Station Road, from All Saints roundabout to the Three Cornered Plot.

Civil enforcement officers will be on duty and a tow-away policy will be in place, the council has warned.

Sidmouth Town Council has also announced a temporary Air Display Water Safety Zone will be patrolled off-shore of Sidmouth beach during the event.

No boats will be permitted in this area between 5.30pm and the end of the display. The zone will be marked by coloured buoys and patrolled by Sidmouth Lifeboat.

Town clerk Christopher Holland said: “To cope with the expected crowds, organisers are once again providing additional car parking and have enabled a number of traffic measures approved with Devon county highways to help with both traffic flow and public safety.”