Tesco has secured the go-ahead to install a cashpoint outside its soon-to-open store in Budleigh Salterton town centre.

The supermarket giant’s proposals for an ATM at 10 Fore Street, which include CCTV and external lighting, have been approved by East Devon District Council (EDDC).

Work is currently under way to convert 1 Ocean House – formerly SM Prior and Son furnishers – into a Tesco Express outlet.

The proposed ATM will provide a service for visitors to the Tesco Express store and other local businesses, as well as local residents…

One nearby resident objected to the cashpoint plan and expressed concern over extra traffic, noise, litter and light pollution, as well as privacy worries over the CCTV.

The supermarket giant’s application to the district council stated: “The proposed ATM will provide a service for visitors to the Tesco Express store and other local businesses, as well as local residents.”

“The location of the ATM has been chosen as it benefits from high levels of natural surveillance and will include additional security installations, including a security light and CCTV camera.” 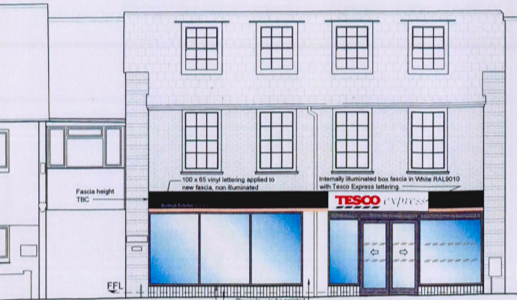 An artist’s impression of the Budleigh Salterton Tesco Express.

Granting permission under delegated powers, an EDDC planning officer said: “Given its limited size and proposed colour scheme, it [the ATM]would have little impact on the appearance of the shop front.

“This application has received support from the town council with no further objections from statutory consultees.

“A third party has raised concerns with regards to additional traffic caused, the CCTV being detrimental to their privacy, noise, litter and light pollution.”

The officer said the cashpoint would not ‘give rise’ to a ‘significant amount of traffic’ or ‘an unacceptable level of noise’.

They added: “Parking for use of the ATM shall be adequately provided by the availability of on-street and off-street parking spaces along Fore Street.

“The proposed CCTV would have an 108 field of view. The camera footage is set back sufficiently enough not to intrude upon the privacy of the residential building across the road.”

Blueprints for the Fore Street cashpoint.