Tuesday, June 28
Trending
You are at:Home»Editor's Choice»Wicked star Alistair Brammer on fatherhood, films and Fiyero – and his last-ever concert in Exmouth

Ask Alistair Brammer what makes him more nervous, the arrival of his first child at the end of the month or his latest West End gig, playing Fiyero, and he will tell you it is the baby.

He has performed for royalty, recently finished filming in Prague with Sir Michael Caine, cracked America and Broadway, has numerous successful West End roles under his belt, and is a household name thanks to his TV stint in BBC One’s Casualty, but I am pleased to report Alistair, 30, is still as down to earth as ever.

“It’s all down to my wife, said Alistair. “If I became too big for my boots, she would be the first one to give me a slap; and my family. I don’t think they would put up with that.”

The lad from Littleham, Exmouth, has had a busy year; Miss Saigon on New York’s Broadway, three films with parts of various sizes and in July Alistair took over the role of Fiyero in the West End production of Wicked, the musical.

Later this month Alistair and his wife, Rachel, also 30, are expecting baby Brammer’s arrival. For the couple, who married in 2016, it is their first child. The West End star admits stepping onto the stage does not faze him, but the thought of being a dad gives him butterflies.

“I will be chucked in at the deep end. I am a little bit nervous about that.”

The couple have not been told if they are having a son or daughter ‘they didn’t ask us if we wanted to know if it was a boy or a girl’.

“There are not many surprises in life, usually a big tax bill – so it’s nice to have a lovely surprise,” said Alistair.

While his hopes were dashed when he narrowly missed out on winning the lead role in a Lloyd Webber musical, Alistair was picked by Any Dream Will Do judge, Bill Kenwright, to appear in Joseph UK, playing the part of Zebulon – one of Joseph’s brothers.

Since that day Alistair’s star has continued to rise; after staying with the West End production for 18 months, he played Jean Prouvaire in the 2012 film of Les Miserables, working alongside Russell Crowe, Hugh Jackman and Anne Hathaway.

Sometimes you pinch yourself to remind you how much work you have put in to get there, and all the trials there were.

The West End followed for Alistair, Les Miserables, Miss Saigon – in the UK and on Broadway – and War Horse. In 2015 he began a six-month stint at Holby City Hospital, playing receptionist Jack Diamond on the BBC’s long-running series, Casualty.

The silver screen beckoned in 2018, and after he finished his role as Chris in Miss Saigon on Broadway, USA, Alistair had a ’very small part’ in Head Full of Honey, a film starring Nick Nolte and Matt Dillon.

He was Leo Marks in Liberte, a Call to Spy, and spent three months filming in Prague as cross bow expert Freddy for the blockbuster Medieval, starring Sir Michael Caine.

Here’s our amazing cast and crew of movie ‘Medieval’ I’ve been on since August. Can you spot me? #michaelcaine !!!!! pic.twitter.com/DRbz65L5ip

In mid-July Alistair joined the West End show Wicked as Fiyero; the story is the prequel to The Wizard of Oz and charts how the witch became wicked.

In the show Fiyero has to dance – something Alistair admits came as a bit of a shock.

Lines fully learned and the show now bedded in, he thanked his ‘fantastic dance teacher’, Hannah, for putting him through his paces for his number, dancing through life.

“The first week of a new show is always difficult; you can’t always know you are going to remember your lines, although you do,” said Alistair.

“I get excited more than anything; I really do love it. I don’t really get nervous; it’s quite the opposite.

“We have four weeks of rehearsals. By the end of week three, it’s ‘get it open now!’ “It’s not until you get the audience reaction you know what you are doing. 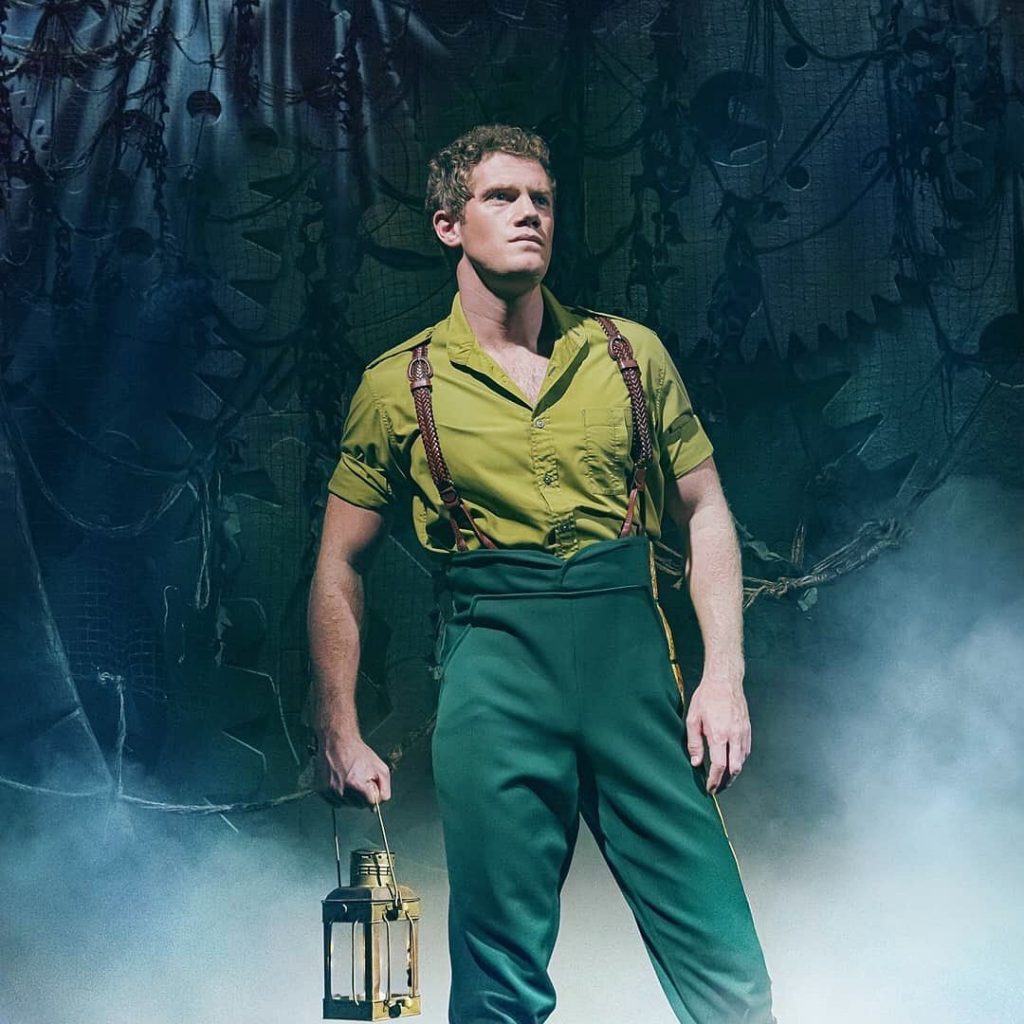 “I have to dance in this show quite a lot, which is the biggest challenge. I have done Les Miserables, War Horse and Miss Saigon where I didn’t dance at all, so it was a bit of a shock.

“I can move but it takes me a long time to get it and for it to look good. It’s better now. We have a fantastic dance teacher.”

I have to dance in this show quite a lot, which is the biggest challenge. I have done Les Miserables, War Horse and Miss Saigon where I didn’t dance at all, so it was a bit of a shock.

He is full of praise for his latest West End role: “Opening in Wicked was amazing. We have got a baby due and it was good timing. I have got a good job for a year so I can feed and clothe the baby.

“All of the filming last year was really fun, but the stability of the theatre job, you really can’t beat it, particularly when you have a baby on the way.

“It came at the right time and I am really happy and having a lot of fun playing it.” 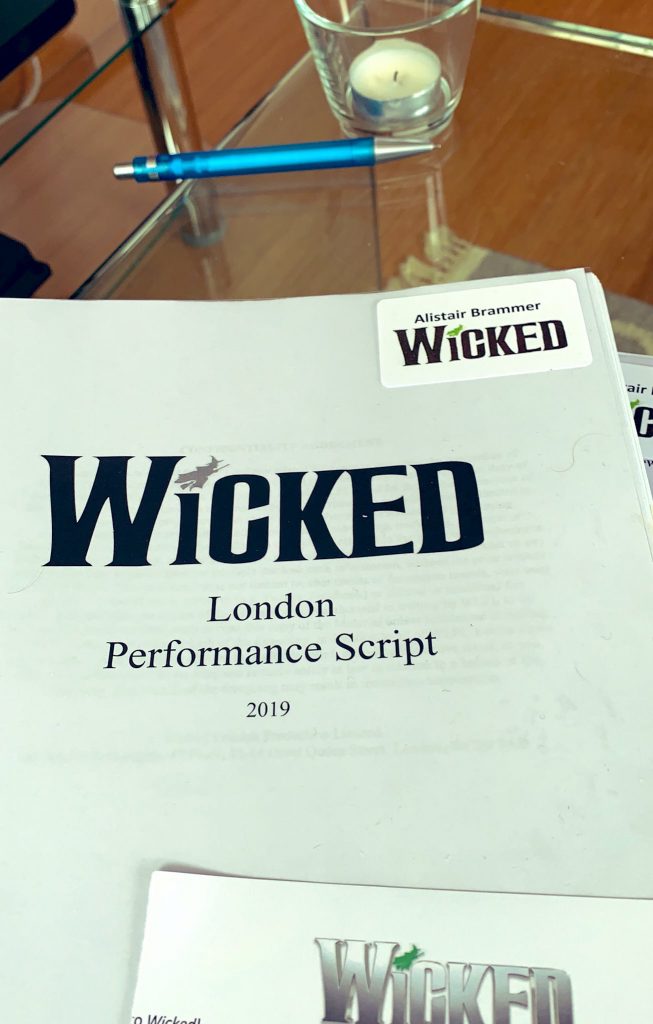 The filming Alistair refers to is Head Full of Honey, starring Nick Nolte and Matt Dillion, Liberte, a Call to Spy, which premiered at the Edinburgh Film Festival, and a stint in Prague on the set of Medieval, starring Sir Michael Caine.

“I spent three months in Prague, filming; it was a beautiful city,” said Alistair. “I didn’t expect to be doing a film last year.

“I hope that after this theatre job that the film work is still there.” 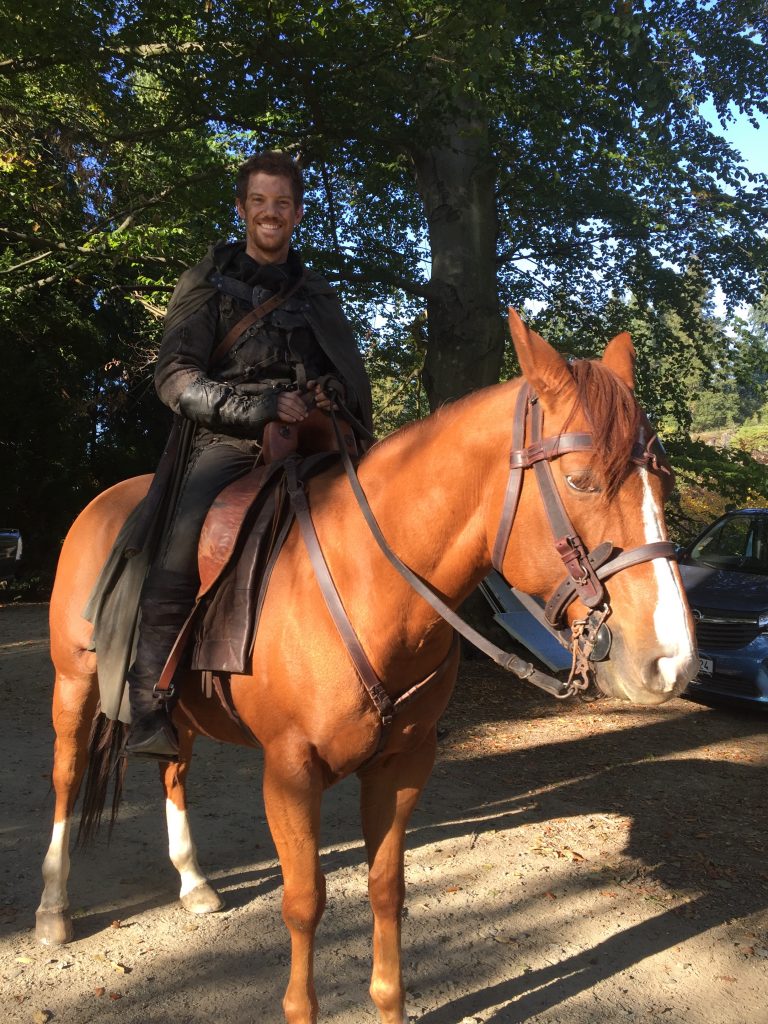 For all his success and stardom, the grounded star often stops and reflects on his career, and the graft he has endured to get there.

“You go through the motions; sometimes you pinch yourself to remind you how much work you have put in to get there, and all the trials there were.

“All the ‘noes’ you got before you got the ‘yes’. Then you start to feel you have earned it.

“Then there are many, many, more moments, sitting in hotels in Prague with Sir Michael Caine, thinking ‘how did this happen!’”

Not forgetting his fans in East Devon, Alistair returns with his Back from Broadway concert with two shows at Exmouth Pavilion on Sunday, December 1.

He says will ‘probably’ be his last performance on home turf.

There will be the chance to hear Alistair perform beautiful classics, pop songs and hits from the shows, plus some collaborations with special guests.

Alistair, whose family lives in Littleham, said the December concert could coincide with baby Brammer’s first trip to Exmouth.

“It will probably be last concert. Once you have got a kid it’s going to be difficult to do things,” said Alistair. “Never say never, but once we have got a baby it will be a bit tougher to organize things.

“I’m doing a concert in Exmouth because people always come up to watch my shows, and it’s only fair I do one there.

“I’m bringing my baby back at the end of November for rehearsals. It will probably be the baby’s first trip to down to Devon; Exmouth is a good place to grow up.”

Tickets are now on sale to see Alistair Brammer in Back from Broadway at Exmouth Pavilion, on Sunday December 1, at 2.30pm and 7.30pm. 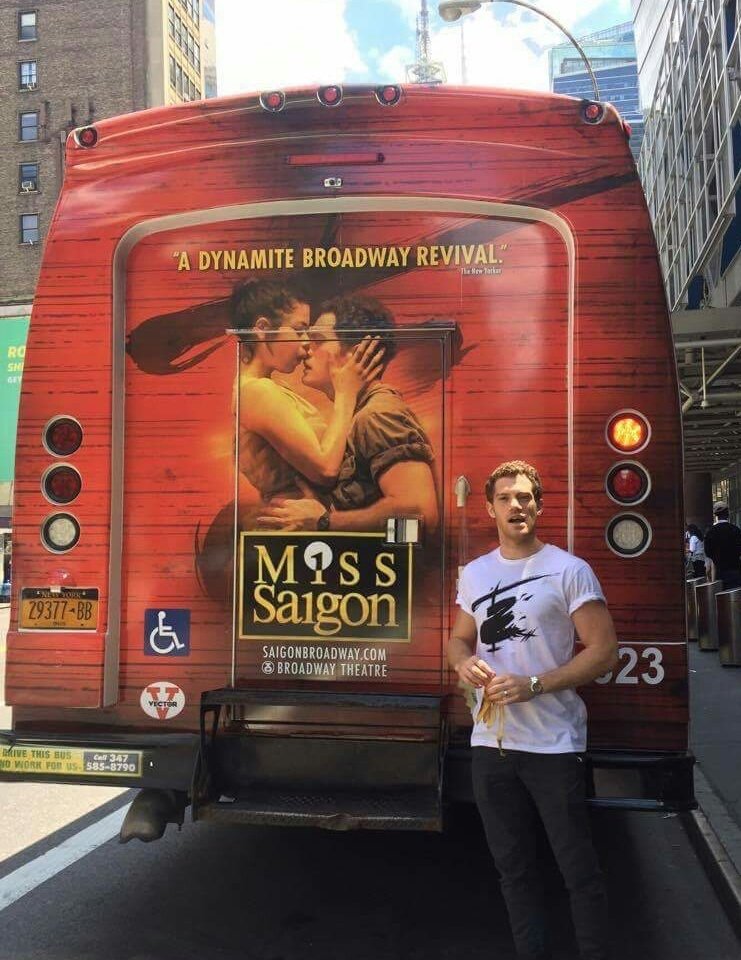 Alistair Brammer spots himself on the back of a bus in New York, for the Broadway musical Miss Saigon.
Photo with permission