Firefighters were called to put out two hot spots, started in close proximity, on heathland near Yettington, on August 3.

Steve Hunt, watch manager at Exmouth fire station, said the cause of the fires was unknown.

The Pebblebed Heaths Conservation Trust believes the fires were started deliberately and took to social media to publicly express disappointment.

Drones, barbecues, fires and camping are activities which pose a significant risk to both protected habitats and public safety.

A spokesperson said: “After the end of a brilliant week celebrating Heath Week we were looking forward to a breather.

“Unfortunately our team had to work with Devon and Somerset Fire and Rescue Service to deal with deliberate fires on the heath.

“Due to speedy response all round, they were dealt with quickly and so were little more than a waste of time and resources to our teams and an annoyance to those affected by the temporary road closure near Yettington.”

In a pre-emptive strike, the fire service has posted warning signage at beauty spots around Exmouth, urging care when visiting heathland and responsible disposal of portable barbecues during dry spells.

The fire service warnings coincide with The Pebblebed Heaths Conservation Trust releasing guidelines on how to prevent blazes during dry spells.

The organisation is asking overnight campers to stay away from the heathland and visitors to leave barbecues at home.

The Pebblebed team plans to upgrade its public car park signage, highlighting the dangers of wildfires, with the addition of fire prevention advice.

A spokesperson for the Pebblebed Heaths Conservation Trust said rangers were ‘concerned’ at the increase in overnight campers on the heaths, and the use of drones.

“Even more concerning is that several groups had fires or barbecues,” the spokesperson said.

“Drones, barbecues, fires and camping are activities which pose a significant risk to both protected habitats and public safety.

“We may assume that local people read signs and understand that the commons are an important conservation and recreational site.

“But with the right of access also goes a duty to follow the Countryside Code and use the countryside responsibly.”

“We will be updating our car park signage to be even clearer soon but, in the meantime, remind everyone to guard against fire, all year round but especially in dry spells.”

The spokesperson added: “The Pebblebed team would also appreciate it, if barbecuing could be left for the garden or the beach and if people could find alternative places to overnight in camper vans.

“All our car parks are currently open and we’d like to keep them that way, enabling locals and visitors to enjoy everything the heaths have to offer.” 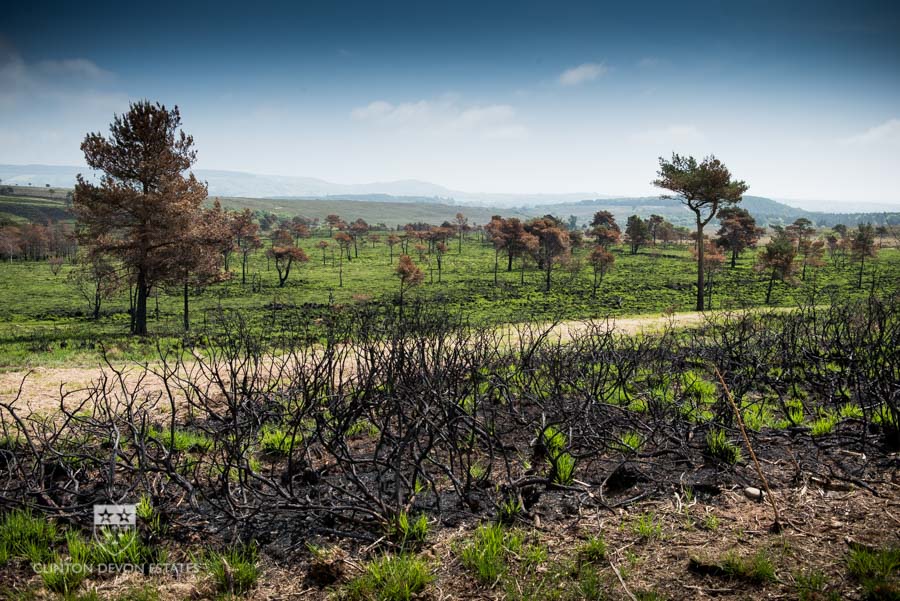 One month on after a gorse fire on the Pebblebed Heaths in 2017.
© Guy Newman. Clinton Devon Estates.