Sunday, June 26
Trending
You are at:Home»News»Honiton»Honiton burglary suspects located by police dog hiding in Salisbury churchyard
Two men wanted on suspicion of burglary in Honiton have been arrested after a police dog called Lorrie located them hiding in a churchyard in Salisbury.

Police say officers attempted to stop a Peugeot 307 on the A36 at Deptford in the early hours of this morning (August 5) but that the vehicle continued towards Salisbury.

The occupants were seen to ‘decamp and run from the scene in the direction of Minster Street’.

This was excellent work by all officers involved, especially police dog Lorrie, who located the two individuals who we now have in custody

A police helicopter was deployed and an area ‘contained’. Wiltshire Police said the vehicle was recovered and a number of brand new power tools, including chainsaws and other equipment, all believed to be stolen, was located inside.

They are appealing for anyone who may have had tools stolen to get in touch. 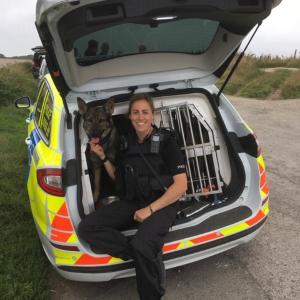 A 22-year-old man and a 32-year-old man, from the Southampton area, were arrested on suspicion of burglary in Honiton.

The 22-year-old was also arrested on suspicion of driving with no insurance.

They are both currently in custody at Melksham.

Inspector Pete Sparrow said: “This was excellent work by all officers involved, especially police dog Lorrie, who located the two individuals who we now have in custody.

“We have also located a large number of garden tools which we believe have been stolen during a burglary across the border in Devon and we will be working closely with our colleagues there as we continue with our enquiries.”