Thursday, October 29
Trending
You are at:Home»News»Exmouth»A Vine day out! What happened when radio and TV star Jeremy got locked in a room in Exmouth…

Broadcaster and TV presenter Jeremy Vine has given the thumbs up to Exmouth Escape Rooms, calling the game ‘brilliant’ and vowing to return.

The Eggheads quiz host said he ‘absolutely loved it’ after he and his family were challenged to solve The Game’s Afoot puzzles, stepping into the world of Sherlock Holmes to foil Moriarty’s plans in a race against time.

Jeremy Vine said he planned to return to Exmouth Escape Rooms to decipher the clues and puzzles of E=MC Scared – a new challenge opening soon, set around a mad scientist professor.

The Radio 2 presenter has been staying in East Devon with his family; he has spent time at Munchkins Miniature Ponies Rescue centre, in Colyton, and meeting volunteers at the Sid Vale and East Devon Talking Newspaper Association, sharing his holiday visits with his fans on Facebook.

Dan Tribble, owner of Exmouth Escape Rooms, said the star had turned the camera on him at the end of the game for a spontaneous interview.

“I was stunned. I didn’t expect anything like that,” said married Dan, aged 34, of Granary Lane, Budleigh Salterton. “You probably see the fear in my eyes when he asks if he can ask me a few questions. It was completely unexpected.

“He gave us a fantastic review; the whole family enjoyed it. He did an impromptu video for us completely off his own bat.” 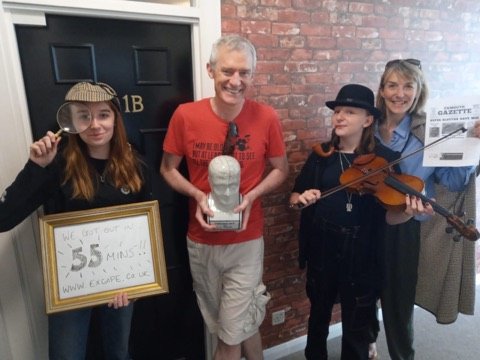 In the filmed interview, Jeremy can be heard asking his family what they thought of Exmouth Escape Rooms, who replied ‘so good’; the star added ‘we absolutely loved it’.

Quizzing Dan about the escape rooms, Jeremy explained the concept, calling it the ‘most fun’. He plugged the location in Exmouth, hoped the recently-launched business ‘goes really well’  and said his family ‘can’t wait to do the next one when it opens; it looks so exciting’. He signed off by telling Dan they had a ‘brilliant, brilliant time’.

Sharing his escape room video with his fans, Jeremy said: “This is a wonderful guy running a great new business in Exmouth. You come with your kids, he locks you all in a room, together you puzzle over super-inventive clues to get out.

“These Escape Rooms are becoming a big thing. Dan, with partner Helen, was making a living as a decorator but got bitten by the Escape Room bug.

“Your hour in his room represents about two years of creative work by Dan, so do give it a go. (Note: we came as paying customers, genuinely had a brilliant time).”

Dan said the Vine family solved the puzzles in 55 minutes: “It was the first booking of the day. It was in his wife’s name.

“I was just expecting a family of four. When he came to the top of the stairs, I was pleasantly surprised.

“The family were great going around the game. They had a few clues, but everybody seems to have a few clues.

“As they went around and solved all the different puzzles, they were really happy and really excited.”

And he spent time meeting volunteers at the Sid Vale and East Devon Talking Newspaper Association, where Jeremy is patron of the charity.