Lofty aspirations to stick a holiday ‘pod’ on top of a disused water tower in East Devon have been dashed.

The unusual accommodation would have been the equivalent height of two-and-a-half double-decker busses off the ground – with a ‘green’ roof to attract insects and birds.

But the bid, proposed for a plot off the busy B3180 Exmouth Road at Aylesbeare, was turned down by East Devon District Council (EDDC).

Applicant Mr J Pidgeon asked for permission for a change of use and to convert the redundant water tower into a contemporary studio-style one-bedroom unit for holidaymakers. 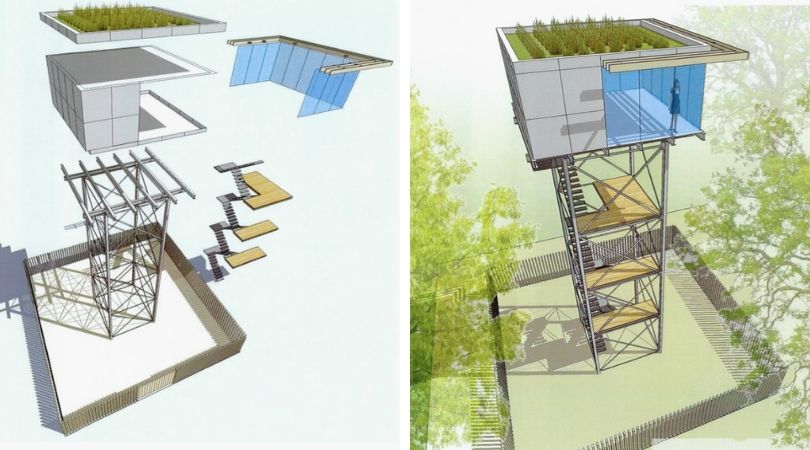 Artist’s impressions of the proposed holiday ‘pod’ featured within the plans.

A new staircase within the steel-framed structure, car port, bicycle and bin storage were also proposed.

The water tank itself would have been retained as the outer skin on the pod, with more than half of it replaced by full-height glazing to the south.

The application stated: “It is considered that the conversion of this redundant structure to provide holiday accommodation will have no detrimental impact on the surrounding area.

“Through a considered design approach, careful detailing and sensitive landscape planting, it will enhance the local area, breathing new life into a local landmark structure.” 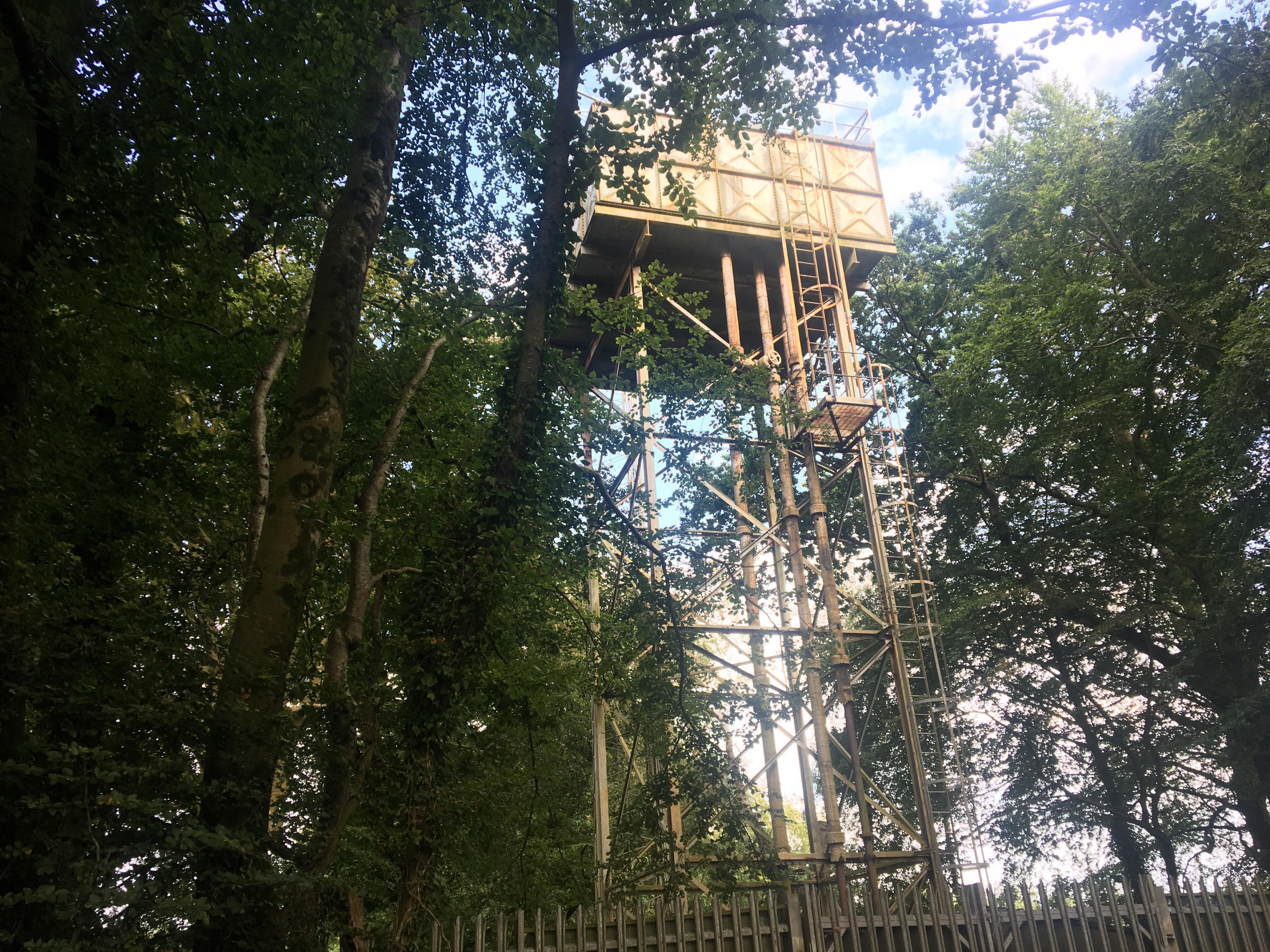 The water tower off the B3180 Exmouth Road.

However, the water tower holiday let scheme drew a string of objections – including concern from Natural England as the site is within 400meters of the protected East Devon Pebblebed Heaths.

Colaton Raleigh Parish Council had to hold an extraordinary planning meeting in February due to the level of local interest in the proposal.

Members expressed ‘serious concerns’ the glass would make the holiday let ‘somewhat of a lighthouse’ that could distract drivers on the busy B3180 road.

Councillors also expressed concern about possible escape routes in case of a fire.

They also questioned whether the Civil Aviation Authority at Exeter Airport needed to be consulted ‘regarding safeguarding issues resulting from the high-level lighting which will be emitted from the proposed pod’.

The owner of a telecommunications mast just metres away from the water tower also opposed the plans. 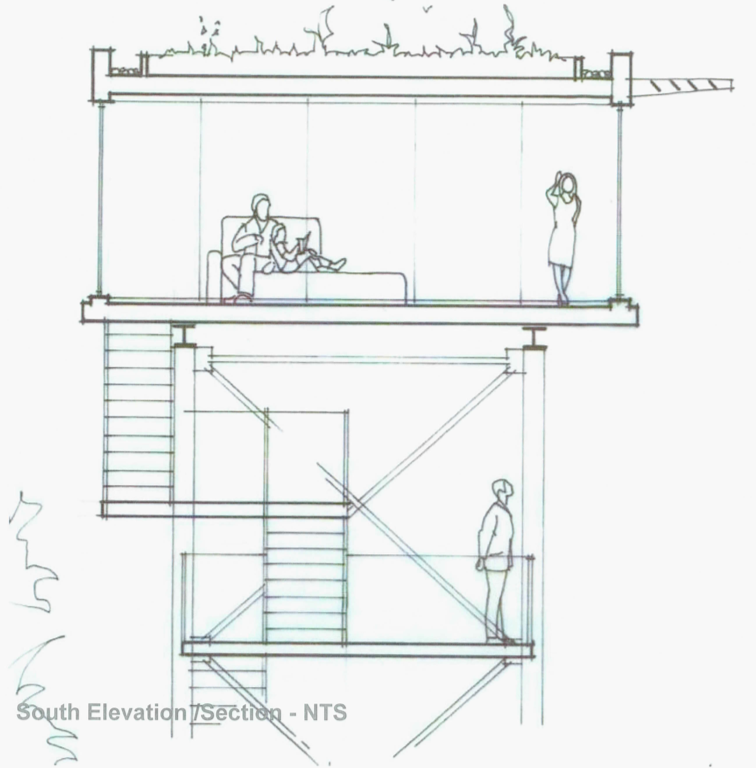 A sketch of the proposed holiday ‘pod’ featured within the plans.

Rejecting the proposals under delegated powers, an EDDC planning officer said: “Although likely to result in modest economic benefit through providing a ‘niche’ form of holiday accommodation within the Area of Outstanding Natural Beauty (AONB), it is felt that this would be considerably outweighed in the overall planning balance by the material harm described.

In a 17-page report, the officer concluded: “Refusal is therefore recommended on the basis of unacceptability of the principle of the development together with particular concerns regarding the detrimental impact of the scheme on the AONB, the adjacent European-designated sites, highway safety interests and trees, together with the lack of satisfactory drainage information and the potential impact upon the operational capability of the adjacent telecommunications mast.”

The Devon Stone Federation and Devon County Council also objected as the scheme could prevent future potential extraction of sand and gravel; site lies within a Mineral Safeguarding area. 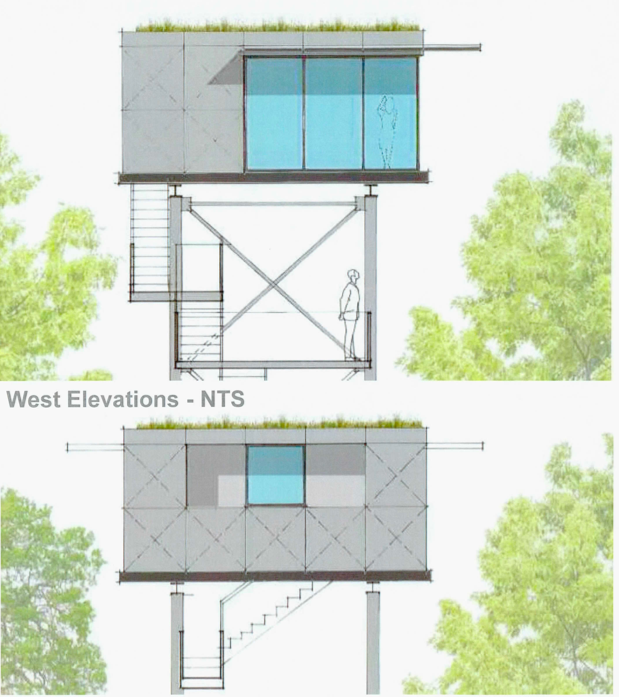 A sketch of the proposed holiday ‘pod’ featured within the plans.