The majority of firearms handed in to Devon and Cornwall Police during a current gun amnesty will be crushed.

A number will be retained, either by the National Ballistics Intelligence Service (NaBIS) or by the force armoury for training purposes.

“Either way, none will ever see the light of day again or re-enter circulation,” a spokesperson said.

If you know where a weapon is being kept illegally, now is your chance to give up the gun, or tell us anonymously where it is.

Ammunition is also being destroyed – all in a bid to keep communities safer.

Running until August 4, the amnesty aims to encourage those with shotguns or rifles with an expired licence to surrender them.

Deactivated firearms, including collectibles, air guns and CO2 powered weapons are all included.

They can be handed in at the Exeter enquiry office, open 8am to 6pm Monday to Saturday . If you can’t arrange transport, email 101@dc.police.uk for advice or collection.

Police say: “Many firearms are held in innocence and ignorance of their illegality or are overlooked and forgotten in people’s homes. Examples of this are shotguns or rifles for which the licence has expired or perhaps handguns brought back into the country from the First and Second World War, or other items acquired as collectibles.” 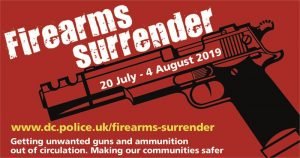 During the amnesty period, those surrendering firearms will not face prosecution for the illegal possession upon surrender and can remain anonymous.

Michelle Mounsey, Firearms and Explosives Licensing Manager for the Devon and Cornwall Police and Dorset Police Alliance said: “We want as many weapons as possible and would encourage people to hand them in. If you know where a weapon is being kept illegally, now is your chance to give up the gun, or tell us anonymously where it is. You will not be prosecuted and you could save a life.

“One weapon taken out of potential circulation is one less that can be used to harm or threaten our communities.”