Seven burglaries, which took place in less than two weeks in Exeter, Exmouth and Honiton, could be linked, detectives believe.

Cash, jewellery and designer handbags were taken during raids between June 23 and July 3.

Police have this evening (July 23) released images of distinctive items stolen during the break-ins and have issued an appeal for help from the public. They say, they hope to be able to trace the stolen items and return them to their rightful owners. 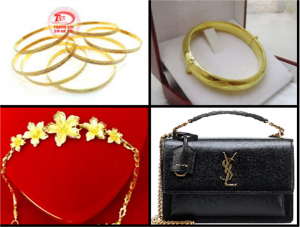 Stolen: These items were stolen during one of the burglaries being linked by detectives. Have you seen them?

Detective Constable Suzie Quinton, of Exmouth CID, said: “In all the crimes, the MO is the same; while the occupants are at work and away from home, their houses are burgled.

“Entry is normally through a rear door which will be smashed. An untidy search takes place where they look for cash and high-value jewellery.

“We are looking for people to come forward that may have been offered these items to buy or seen them for sale; they are distinctive items as some are from India and Vietnam.

“If anyone noticed anything unusual during these dates at these locations we would like to hear from them.”

A dwelling in Lime Grove, Exmouth, was burgled between 5.30pm and 10pm on Sunday, June 23. A quantity of cash and jewellery was stolen.

Also in Exmouth, a house in Park Road was broken into between 8pm on Saturday, June 29 and 1.20pm on Sunday, June 30. An 18ct gold bracelet consisting of 20 chains, a solid gold 18ct bracelet, an 18ct gold necklace chain with yellow gold flowers with white dapple on the petals, and an Yves Saint Laurent handbag were taken. These items are pictured above.

A dwelling in New Street, Honiton, was broken into at around 3.45pm on Sunday, June 30.  It is not believed anything was taken.

A property in Daleside Road, Exeter, was burgled between 12.30pm and 1.30pm on Saturday, June 29. A quantity of cash was stolen along with a brown Louis Vutton suitcase.

A house in Crabb Lane, Exeter, was broken into sometime between 4pm on Friday, June 28 and Sunday, June 30. The whole property had been searched, but nothing was taken.

A property in Woodville Road, Exeter, was broken into between 10.30am and 6pm on Wednesday, July 3. A black, square Dior handbag with a gold strap, a red Louis Vutton clutch bag, two gold necklaces and two gold rings were taken.

Information can also be passed anonymously to independent charity Crimestoppers by calling 0800 555111, or via www.crimestoppers-uk.org