Friday, August 19
Trending
You are at:Home»News»Budleigh Salterton»Closing Budleigh’s fire station is a ‘disaster waiting to happen’

Blaze victims from Budleigh Salterton have called plans to close the town’s fire station a ‘disaster waiting to happen’.

Just because Budleigh is small and beautiful, doesn’t mean we should be unprotected.

Fire victims Peter Phillips and John Paul Evans whose garage, in Redhills, Budleigh, was destroyed by a tumble drier blaze in May, called cuts to firefighters and stations ‘unacceptable’.

In a letter of support of keeping the town’s fire station and Exmouth’s 24/7 full time crew, the pair said the speed at which Budleigh’s firefighters responded had been critical in saving their property.

In support of Budleigh’s crew, they said: “If the response of the local fire teams had not been as fast, then we are in no doubt that the whole structure would have been destroyed, along with our neighbour’s wooden fence and shed.

“The proposal to close the Budleigh fire station and reduce the Exmouth station to daytime hours is a disaster waiting to happen.” 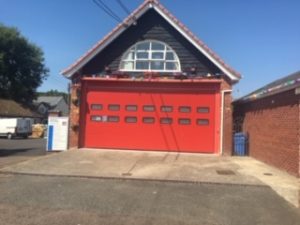 Budleigh residents on Monday, July 15, were invited to the Hub, in East Budleigh Road, to quiz firefighters and DSFRS chiefs about the Safer Together consultation and proposed cost-cutting changes put forward by the fire service for Devon and Somerset.

DSFRS said it must save money and is looking at closing fire stations and reducing full-time cover; Budleigh’s station is under threat of closure. Exmouth’s full-time crew could be slashed.

“It’s just another nail in the coffin; we have no police and we will have no fire station,” he said.

“Just because Budleigh is small and beautiful, doesn’t mean we should be unprotected.” 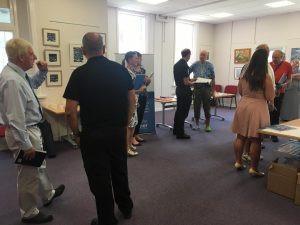 Devon County Councillor Christine Channon, who lives in Cricket Field Lane, Budleigh, said: “One of the options in Exmouth was to have a day service and a reserve night service; that’s crazy because Exmouth is the largest town in Devon.

“In this particular area there are a lot of elderly people. We have also got Woodbury Common.

“They are saying it’s an option to remove Budleigh Salterton because we haven’t had many fires, so on the basis of that it could happen; but look at the Royal Clarence Hotel fire.

Chris Kitson, a former Budleigh town councillor and mayor, urged the public to take part in the consultation.

He said: “The potential closure of Budleigh Salterton fire station does not in itself put a greater risk to the community.

“There have been many instances in recent years when there has not been a crew of retained staff – on-call members of the local community – to respond to an emergency.

“Often the engine allocated to be garaged at Budleigh Salterton has been relocated to another Devon location where more crew opportunities exist.

“The current time targets for attending a fire, or other incident, under a range of future potential fire service options, will be maintained; this information was given at Budleigh’s local engagement event.”

DSFRS is canvasing Devon and Somerset residents until September 22, 2019, about a range of options to save the service money, including station closures, slashing crewing hours and removing fire engines.

Collating fire statistics based on call-outs and rescues from across the two counties has prompted DSFRS to call for changes to be made to the way it works.