Sunday, June 26
Trending
You are at:Home»Features»The truth about fly-tipping

Every week in East Devon rubbish is dumped on roads, in lay-bys or in the countryside. Sometimes it is left by those too lazy to drive to a recycling centre or use a bin. On other occasions it is fly-tipped by unscrupulous waste contractors.

There are strict laws governing fly-tipping in the UK. When you consider that clearing up the mess costs the public purse around £60m a year, you will understand why.

Incidents of fly-tipping in England have risen by almost 40 per cent over the last six years. The Local Government Association has raised concerns, saying some councils are struggling to keep up at a time when funding is being cut. 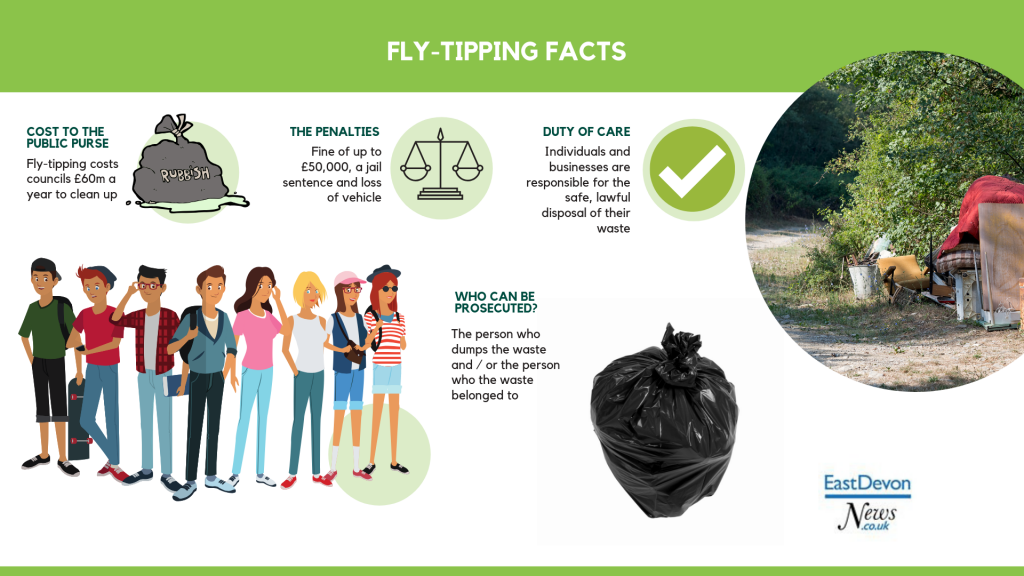 Last summer East Devon District Council was forced to clear up after travellers in Honiton – even though the authority said they had been given rubbish bags.

The year before, in 2017, it launched a campaign warning householders to check who they allow to take their waste away. Did you know, you can be held liable if your rubbish is subsequently fly-tipped?

Every year the council issues penalty notices to those responsible for fly-tipping. It has even managed to take action against a member of the public who was seen throwing litter from a lorry.

Why fly-tipping is illegal

Fly-tipping is illegal. It occurs when waste is left on land that is not licenced to accept it. Items most commonly dumped in East Devon include household waste, white goods, mattresses, garden refuse, tyres and even dead animals.

If rubbish is dumped on private land, the landowner is responsible for the clean-up. East Devon District Council will remove it if the fly-tipping is on its land, on roads or in lay-bys.

Keep Britain Tidy says: “Uncontrolled illegal waste disposal can be hazardous to the public, especially if it contains toxic material or asbestos. There could be a risk of damage to watercourses and soil quality from the dumped waste.”

The penalties for fly-tipping

The penalties for fly tipping can include jail time and / or fines of up to £50,000.

Another power given to the courts is the authority to deprive a fly-tipper of the vehicle they used to commit the offence.

The penalties for fly tipping can include jail time and / or fines of up to £50,000.

It is worth pointing out that East Devon District Council says it takes a “zero tolerance” approach towards fly-tipping and will take enforcement action against people who flout the law.

As well as responding to complaints about fly tipping, the authority will use the dumped waste to identify the owner or the person who tipped it.

Some local authorities are resorting to covert cameras to keep watch over fly-tipping hot spots.

What about in East Devon?

Following a successful prosecution, an East Devon District Council spokesman said: “The council will pursue any reports of fly tipping and littering where the offender can be identified, and fixed penalty notices will be issued.

“For residents, there are plenty of opportunities to do the right thing with their waste and there is no excuse for not using the recycling and waste management facilities readily available.”

Individuals and businesses have a duty of care regarding their waste.

Fixed penalties can be issued for fly-tipping domestic and commercial waste, and for littering.

A council spokesperson said: “Anyone using a contractor must obtain full name, address and vehicle details and a written receipt because they could end up being liable if a third party fly tips their waste.”

You can report fly-tipping here.