Friday, July 10
Trending
You are at:Home»Editor's Choice»Stars shaped by Exmouth

Did you know these famous names have roots in Exmouth and Budleigh Salterton?

From small acorns, mighty oaks grow – and Exmouth has certainly played its part in shaping some well-known, household, names.

While Budleigh Salterton has tugged so hard at the heartstrings, famous names have made it their home.

Alistair Brammer
Actor, born November 12, 1988.
Former Exmouth Centre Stage member Alistair first appeared on the BBC in 2007 on Any Dream Will Do, hoping to impress Sir Andrew Lloyd Webber to win the coveted lead role in Joseph and the Amazing Technicolor Dreamcoat.
Since then, his star has continued to rise; Alistair, who went to school at Exmouth Community College, played Holby City Hospital receptionist, Jack, in the BBC’s long-running hit television series Casualty.
His West End credits include Les Miserables, Miss Siagon and War Horse. 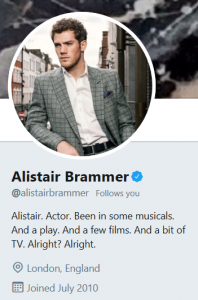 Pauline Collins
Actor, born September 3, 1940.
Pauline Collins was born in Exmouth, daughter of schoolteacher Mary Honora, and William Henry Collins, a headmaster.
Her TV credits include playing Samantha Briggs in Doctor Who, teaming up with the second Doctor, played by Patrick Troughton, and Dawn, in series one of The Liver Birds.
She became best known as Sarah in the ITV 1970s drama Upstairs, Downstairs, and the 1989 film version of Shirley Valentine.

Ed ‘Stewpot’ Stewart
Broadcaster and TV presenter, born in Exmouth on April 23, 1941.
Ed was one of the first DJs to join Radio One; he took over the weekend morning show Junior Choice in 1968, fronting the show for more than a decade.
His television career included presenting BBC’s Top of the Pops in the 1970s, and the popular children’s programme, Crackerjack, from 1973 to 1979.
He continued radio presenting throughout his life.
He died aged 74, on January 9, 2016.

Rick Wakeman
Born May 14, 1949. Musician and keyboard player for 70s prog-rock band Yes.
Rick fell in love with Exmouth as a six-year-old boy when he holidayed in the town, staying in a Withycombe Raleigh bed and breakfast with his family.
Every year the young Rick, with his mum and dad, would make the 13-hour journey from London to Exmouth, for a fortnight’s holiday, staying with Mrs Clark at her Lawn Road bed and breakfast.
He made the trip annually until he was 17; his parents continued until Mrs Clark died in the 1970s.
Rick said the place ‘stayed with him’; in 2008 Rick said he would ‘like to buy’ 24 Lawn Road, if it ever came on the market, running it as a bed and breakfast.
He said: “It would be fantastic if others could have the same sort of holidays I loved so much as a boy.” 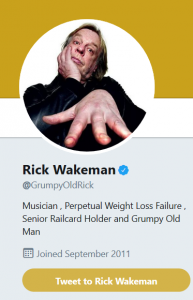 Musician Rick Wakeman fell in love with Exmouth as a boy when he holidayed each year with his parents.
Photo: Twitter

Reg Varney
Actor, July 11, 1916 – November 16, 2008
Comedian Reg Varney found fame as Stan Butler in 70s sitcom On the Buses.
His TV career was launched in the early 1960s in the BBC hit Rag Trade, in the role of Reg Turner; he was also in The Great St Trinian’s Train Robbery in 1966.
He retired to East Devon in the late 1990s, living in Dark Lane, Budleigh Salterton, with his wife, Lilian.
Widowed in 2002, Budlegh’s adopted son Reg died aged 92 in Pinewood Nursing Home, in November 2008.

Dame Hilary Mantel
Supporter of Budleigh Salterton Literary Festival, award-winning author of the epic Wolf Hall, Dame Hilary Mantel lives in a flat in the town.
She made Budleigh her home after a beach visit, vowing she would one day move to the town, thinking it ‘was exotic and foreign’.

Sue Lawley
Born July 14, 1946.
For more than a decade, former BBC Radio 4 Desert Island Discs presenter Sue Lawley lived at Claremont House, in Cliff Terrace, Budleigh Salterton.
The broadcaster said it was ‘love at first sight’ when she first saw the house in 1995, driving past with her husband, Hugh Williams.
For the next 16 years, Sue, her family, and mum, Peggy, called Budleigh and the Grade II-listed 1830s house, home.
Sue and her family sold Claremont House in 2011; she said Budleigh Salterton would be ‘inscribed on her heart’.