Thursday, October 22
Trending
You are at:Home»News»Exmouth»Controversial plan for temporary Exmouth seafront car park on verge of getting green light

Plans for a temporary car park for 50 vehicles on Exmouth seafront – panned as ‘unjustified, unnecessary and unhelpful’ – look set to be given the go-ahead.

East Devon District Council (EDDC) wants to create the overflow facility off Queen’s Drive – and keep it in place for three years.

The authority’s development management committee will decide on the proposals next Tuesday (July 9). Officers have recommended they are approved.

The site, once part of the former seafront amusement park, has now been cleared and is being used as a compound for other works in the area. A watersports centre is being constructed to the south of the plot.

That area of land should have been set aside for over-sevens recreation, not an unsightly and inappropriate development…

EDDC says seafront regeneration work will result in the net loss of 75 parking spaces – with its proposal aimed at mitigating this.

In a report to committee members recommending the application is approved, a planning officer says: “This is considered to be a suitable justification for the proposal, especially as the site is close to a number of key attractions, such as the bowling centre, Queen’s Drive Space and the beach.”

The plot is within an area specified as being for entertainment in a masterplan for the seafront.

The officer adds: “Clearly, the proposal is not for an entertainment purpose. However, it would be temporary and would facilitate improved access to the facilities which are currently present in that area, by way of providing additional parking at busy times to compensate for that lost in the area.

“Whilst there are other parking facilities in Exmouth, these are considered to be too far from the site to have the same impact.

“As such, the proposal would support the temporary uses and watersports centre, is itself temporary in nature, and, in the absence of any other planning proposals for the site, a car park use is considered to be acceptable in planning terms until its long-term future is decided.” 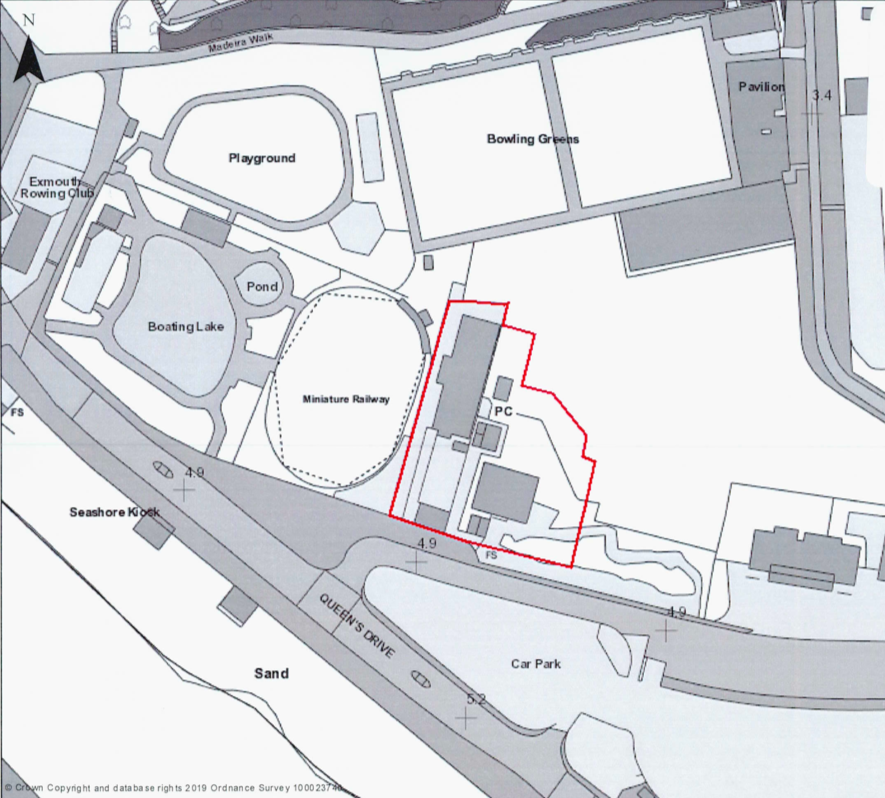 Exmouth Town Council has voiced its opposition to the plan, saying: “That area of land should have been set aside for over-sevens recreation, not an unsightly and inappropriate development.”

A pair of Exmouth Littleham ward members on EDDC have also blasted the proposals.

Councillor Nick Hookway said the car park is ‘unjustified, unnecessary and unhelpful’, adding: “There is a real danger here that the attractiveness of the Queen’s Drive is being endangered by creating what amounts to a retail-style car park with little concern given towards landscaping or screening.

“If approved, this car park would encroach upon the ‘open space’ area and will be right next to a young children’s playground.”

Cllr Chris Wright said: “The proximity to the children’s play area of additional vehicles would  raises concerns on road safety with additional vehicle movements so close to families visiting the site, noise pollution and air quality.

“My major concern would be that I believe this application is seeking to address a long-term problem in a perceived lack of parking for commercial consideration and, if the application were to be approved, the area will never return to open space for leisure use for which it is intended.”

Councillor Bruce De Saram has supported the plan, so long as it is for temporary use only.