Rare bird breeds have increased on the River Otter thanks to a pensioner husband and wife from East Devon who have revived dwindling species.

Doug Cullen, a retired printer for the London Evening Standard, and Joan, both in their 80s, have been praised by landowner Clinton Devon Estates (CDE) for their dedication as River Otter bird wardens, spanning almost 30 years.

Since the couple spotted a pair of rare cirl buntings  near Stantyway Farm, Otterton, around 10 years ago – prompting a project to ensure their survival – the species has gone from strength-to-strength.

At that time, the birds had not been seen this side of the River Exe Estuary for at least 20 years; the latest count, in January 2019, put the cirl bunting population in Otterton at 28, with another pair spotted over near Weston, Sidmouth.

Landowner CDE said the population of cirl buntings had declined so much, due to the intensification of farming and loss of habitat, that by 1989 the RSPB estimated just 118 pairs remaining in the whole of Britain, confined only to South Devon.

The collective’s efforts continued and were extended by farmers Sam and Nell Walker, who took over the tenancy of 264-acre arable Stantyway Farm when Martin retired.

Dr Sam Bridgewater said: “Doug and Joan have played a significant role in improving the future prospects of the cirl buntings in Devon and the species as a whole.

“We are most grateful to both of them for being our eyes and ears along the Lower Otter Estuary for almost 30 years; their enthusiasm and dedication has had a direct impact on bird populations there.”

Joan, 85, a retired bank fraud manager who grew up in Honiton, said: “When we first discovered them, we went straight to Sam and he was as keen as us to do what we could to help reinstate the area as a habitat for them.

“The objective was to keep them there, so the initial focus was how best to improve the habitat.

“One way was substituting their main food source of arable plant seeds, with a millet and canary seed mix.

“The retention of over-wintering stubble fields, which provide a winter seed food source, the management of broad grassy field margins to ensure summer feeding opportunities and encouraging dense hedgerows for nesting, were important.”

Boosting the the cirl bunting population has had a knock-on effect on an increase in migrational birds along the Lower Otter Estuary, at Budleigh Salterton. 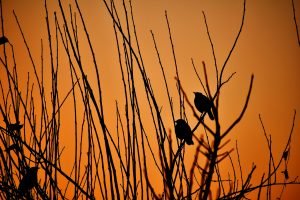 Rare bird breeds have increased on the River Otter thanks to a pensioner husband and wife from East Devon who have revived dwindling species.
Photo: Ravi Shekhar

Doug and Joan have helped increase Otterton’s winter and breeding skylark population, landowner CDE said.
This has been achieved through improving the habitat for migrational birds and management – scrapes – of the large reed beds.

Doug, 84, originally from Hackney, East London, said: “Our whole aim was to encourage birdlife and wildlife to the area, so we looked at how the landscape could be improved.

“The scrapes are good because different species like different depths. You could say that it’s been landscaped for birds.”

He added: “Birdlife and wildlife have increased hugely over the years and we’re seeing more rare species.
“And we’re getting more migrants staying the whole year, rather than breeding here and then going.”

Joan and Doug regularly walk along the River Otter looking for birds; they have been volunteering for around 35 years in total, starting with the RSPB and the Kent Wildlife Trust when they worked in London,

Ever since they moved to East Devon from London in 1990, the couple has volunteered for the Pebblebed Heaths Conservation Trust, was set up by landowner Clinton Devon Estates in 2006 to manage the heathland and conserve the surrounding landscape, including the River Otter Estuary.

Landowner CDE said the couple’s early work served as a precursor for the evolving Lower Otter Restoration Project, a joint partnership between Clinton Devon Estates and the Environment Agency deemed ‘crucial’ in restoring the ecological health and inter-tidal habitats of the lower Otter valley and adapting to climate change.