School staff have been compelled to dog poo pick on East Devon’s Pebblebed Heaths before they can safely take the kids to visit.

A professional dogwalker championing responsible ownership revealed how kids’ health is being compromised by lazy owners failing to pick up after their pets.

Staff that lead school activities on the heaths told me they go and pick up dog waste before the kids play there – no one should have to do this.

Cassie Bulger, 46, who runs a dog walking and equine care business, Pets Outdoors, said owners using the Pebblebed Heaths and Woodbury Common to exercise dogs had a responsibility to others.

The former teacher said: “Staff that lead school activities on the heaths told me they go and pick up dog waste before the kids play there – no one should have to do this.”

Landowner Clinton Devon Estates said the 18 professional dog walking companies licensed to use the heaths, lead by example; each walk up to six dogs at a time – the maximum number permitted by law and insurance regulations, and actively promote the Pebblebed Dog Code – highlighting how dog walkers can use the heaths responsibly.

Cassie, who received her license to walk dogs on the heath in 2018, has prompted two poo picking days, backed by other commercial dog walkers keen to support the heathland dog code.

She said: “Not seeing your dog go, is no excuse.”

More than 40 tonnes of dog muck has been cleared from the 1,100-hectare heathland conservation area – a Site of Special Scientific Interest (SSSI) – a since the dog walking code of conduct was introduced in 2018.

Kim Strawbridge, Pebblebed Heaths site manager, said the majority of dog walkers were doing a ‘brilliant job’ cleaning up after their pet, but more consideration was needed around car parks and the first few hundred metres of paths. 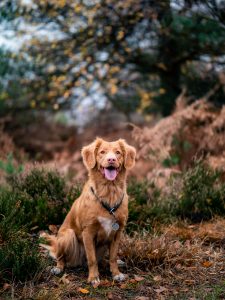 Owners using the Pebblebed Heaths and Woodbury Common to exercise dogs have a responsibility to others to clean up after their pet.
Photo: Jamie Street

She said: “People can help us improve these areas is by getting themselves ready before letting their dogs out of the car.

“It is very easy to be distracted at the start of the walk and we think this is why we still have a particular problem in these areas.”

Kim said leaving dog mess on the ground could affect the heathland grasses though changes in soil conditions.

She said poo picking was a legal requirement on the heaths; it kept wildlife, cattle and visitors healthy.

“Heathland is special in that it needs soil which is nutrient poor,” said Kim.

“Typical heathland plants include heather and gorse as well as grasses, but not the type found on your lawn; one of the reasons we see green verges, especially near the car parks, is because of nutrient enrichment from dog poo.

“Not only is it a legal requirement to remove your dog’s waste from the heaths, it is the easiest way people can help us keep the heath healthy for the wildlife that live there, the stock that graze there, and the people that work and play there.”