Mini enthusiasts who have raised funds for Exmouth RNLI for the last time have been praised by the sea safety charity for their dedication and support.

Over the last decade the Jurassic Coast Mini Club has raised more than £9,000 for Exmouth RNLI through an annual rally from Weymouth to the lifeboat station.

Exmouth RNLI said the Jurassic Coast Mini Club’s latest Weymouth to Exmouth Jurassic Rally was the club’s last because the group was ‘winding down’.

The club has donated its residual funds to Exmouth RNLI, presenting a cheque for £1,125. 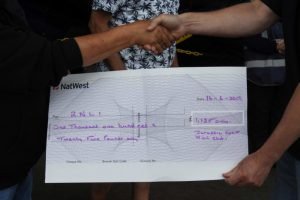 Kevin Riley, Exmouth lifeboat operations manager, said: “Our volunteers are obviously very sorry to hear that the Jurassic Coast Mini Club is winding down but extremely grateful to the organisation for their recent very generous donation.

“We are also very appreciative for the many years that the club have steadfastly supported our lifesaving charity – having donated this fantastic sum of money will potentially allow us here at Exmouth to help fund and train crew, purchase vital equipment and continue our voluntary work saving lives at sea.”