Friday, January 28
Trending
You are at:Home»News»Exeter»Plans for 400 new homes in Exeter revealed

Plans have been revealed for 400 homes on a former rail yard in Exeter.

The developer is also seeking permission for an access road and to refurbish and extend the locally listed old water tower at the former Exmouth Junction Rail Yard.

If given the go-ahead by Exeter City Council, work could begin on the site in spring next year.

The developer says the ‘important city site’ has been used as ‘redundant storage land’ and ‘underutilised’ as a former railway interchange for the past three decades.

“We have been through a rigorous consultation process and we are proud of the proposals we have put forward,” said Scott Hammond, CEO of Eutopia Homes.

“This development will be a positive addition to Exeter.

“As well as the wealth of high-quality homes and green spaces, we have designed a scheme which looks to reduce car dominance and encourage sustainable trips through walking and cycling and car clubs. 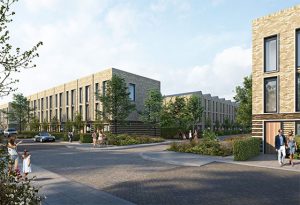 Eutopia Homes has unveiled proposals for 400 homes in Prince Charles Road at the former Exmouth Junction Rail Yard in Exeter.

Work could start in spring 2020

“We anticipate a planning committee decision to be made late summer 2019, which – if approved – would allow work on site to commence in spring 2020”.

The outline application is for 296 one-, two- and three-bedroom apartments, which would be built in three five-storey blocks. A further 104 four-bedroom, three-storey townhouses are also proposed.

Eutopia Homes says the scheme will attract around £90million of private investment and generate a residential spend of £11.9million a year, as well as £735,000 in council tax.

A public consultation event saw 52 per cent of respondents state they supported the plans, while 29 per cent objected.

The full planning application submission can be viewed here.