A football club giving disabled players a shot at sporting glory is going from strength to strength after landing a league title and promotion. 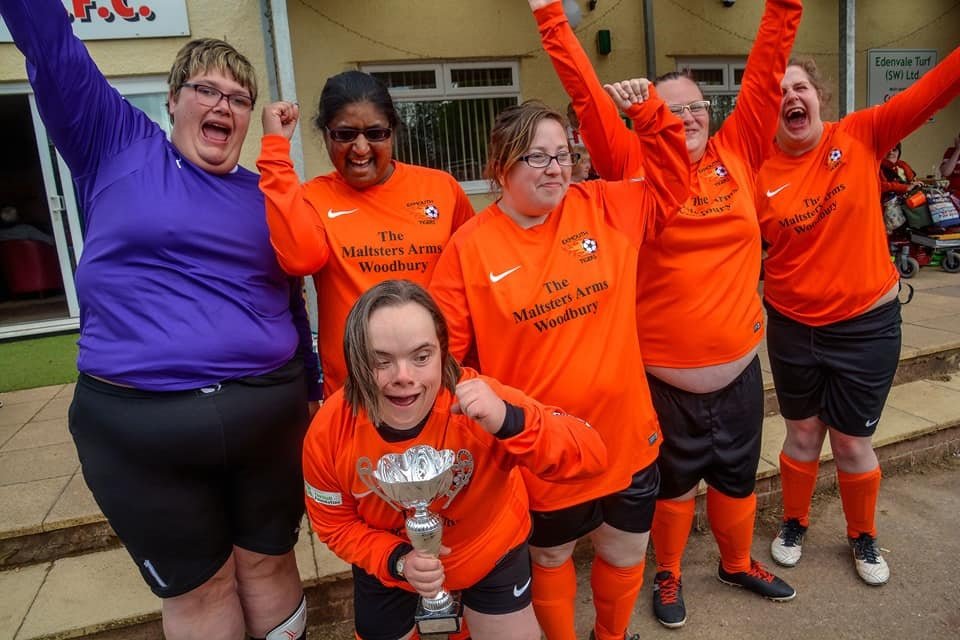 The initial idea to form the club came from a four-strong group of young disabled men in 2015.

Without doubt, this latest season has been their best so far….

Since those humble beginnings, and, in the space of just four seasons, the club has grown in numbers and recently secured a third promotion.

The Ability Counts League was formed a decade ago by the Devon FA and currently has more than 500 players aged 16 and above – all of whom have a wide range of disabilities – actively playing the sport.

The teams train as individual clubs every week and meet once a month between September and May.

The Tigers train at Exmouth Rugby Club on Saturday mornings and now have 15 men and six ladies. All of the players attend Exmouth Gateway; a social club for adults with learning disabilities.

The men’s team is managed by Paul Baldwin and captained by Tom O’Callaghan.

They ended another fabulous campaign by lifting the Intermediate Two league title on the final day of tournament action in Cullompton.

Next season, the Tigers are hoping to attract some new players to add to the squad as they are keen to run a second men’s team.

Head coach Paul said: “The squad should all be very proud of their performance this season.

“Without doubt, this latest season has been their best so far. They have come on leaps and bounds in terms of developing their skills, playing some excellent football and working so hard as a team.

“We are so grateful to Exmouth Rugby Club for allowing us to train there and also all those who have helped and supported us throughout the season, particularly manager/coach Steve Letheren, ladies’ team manger Emma Baldwin and assistant manager Carolyn Letheren, as well as all the other volunteers of Exmouth Gateway, who all give up their spare time for both training and matches to ensure the teams can take part.”

The ladies’ side was formed last season and currently has just six members. They are still in the early stages of their football together, but have made great progress.

“As relative newcomers to their competition this past season, they have had a tough time, but have clearly developed individually and collectively with their football skills,” said Paul.

“Their clear enjoyment, determination, enthusiasm, and perseverance finally paid off at the final tournament when they won their first-ever game.”

The squad should all be very proud of their performance this season….

What’s more, the team were awarded the Team Respect trophy for the ladies’ league.

Paul added: “Winning the award gave everyone involved a huge boost! It certainly underlined that the game is definitely not just about winning, but how you play as a team.

The ladies’ squad is made up of of Charlotte Keegan, Jodene Knott, Rae Savage, Angela Edworthy, Bex Bell and Roxy Hopkins.

“They have all done so well in their first season of football, and should be very proud of themselves, as we are, for what they have achieved,” said Paul.

The club has issued a huge thank-you to its valued sponsors and, in particular to Circle of Care Devon Ltd, which provided training tops and the ladies’ team kit sponsors, Sam and Matt Knighton of The Maltsters Arms, Woodbury.

Exmouth Tigers is always looking for sponsorship for kit and equipment for players, as most of them are unable to fund this themselves.

Paul said: “The only requirements are that you are aged 16 plus and have a disability. I’d also love to hear from anyone who feels they would like to assist with coaching.”