An Exmouth charity founder has been named Devon and Cornwall’s Inspirational Woman of the Year in the 2019 Venus Awards.

Alison Jordan says she is ‘extremely proud’ to have won the accolade for her work helping suicide bereaved families with Pete’s Dragons.

Mum-of-four Alison was also a finalist in the Influential Woman of the Year category. She said: “To be seen as inspirational for working in a field which for so long has been taboo shows a real shift in terms of community acceptance of the issues around suicide and a desire to overcome it.

“From a personal perspective, I am honoured to have received this award and hope that this goes some way to inspiring others to believe in themselves, follow their passions, overcome setbacks and achieve their dreams.”

Today, the Exeter Road-based charity is the only suicide bereavement support service of its kind in the South West. It is currently helping more than 300 people across Devon.

Turning tragedy into something positive

Andrew Hirshman, director of Drakes jewellers, which sponsored the Inspirational Woman of the Year category, said: “We felt incredibly inspired by Alison’s story and the amazing work she does for Pete’s Dragons. How she turned something so tragic into something that is so positive, helping so many people, is truly inspirational; she just had to be our winner. “We have absolutely loved meeting Alison and finding out about the amazing work of her charity.” 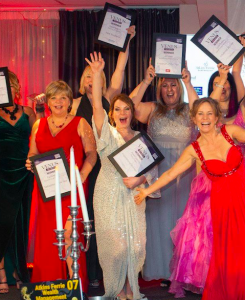 This year’s Devon and Cornwall Venus Awards received more than 1,440 nominations and applications. Alison was one of 15 winners.

Dubbed as ‘The Working Women’s Oscars’, the awards recognise the vital contribution that women in business make to the local, regional and national economy.

The award is the second honour Alison has received in the space of a month.

In March, she was named among 150 people to be selected from nearly 1,800 applicants to win a Churchill Fellowship.

The grant means Alison can embark on a once-in-a-lifetime trip and spend two months in the USA later this year. She will research new approaches to suicide prevention and bereavement to benefit UK families.